About 20 years ago, we planted 11,000 slash pines on our property.  The tiny saplings hardly looked like trees at all.  Barely six-inches tall, the scrawny slips were evenly spaced in neat rows following the land’s natural contours.  For the first three or four years, Ralph and I had a hard time believing the trees would ever amount to much.  Then one day – much as it is with children – we turned around and they were big.

Ever since, we've lived in a pinewood forest interspersed with assorted bamboos, fruit trees, ornamentals and the occasional volunteer plant - bush, vine or tree - sometimes welcome, sometimes not.  On hot days, it’s noticeably cooler in the woods.  On rainy days, the tree canopy makes it drier.

Then, about three or four years ago, we began to notice pine trees in various stages of decline.  At first, it was just a few trees here and there.  Pine needles turned brown and fell to the ground. After any heavy windstorm, branches broke and fell down too. 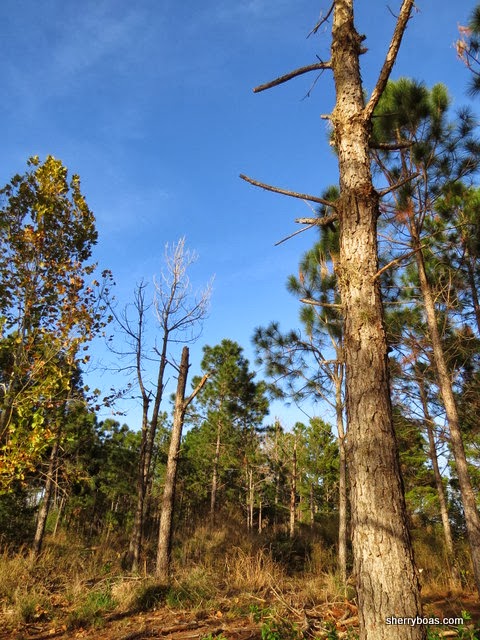 Although I was sad to see so many trees die, an accompanying surge in woodpecker activity eased my distress.  We've always had some bark-boring birds on the property but the pines’ decline seemed to trigger a population explosion of woodpecker species.

On meanders around the property, I began noticing one woodpecker after another pecking away at the dead pine trees.  Of the eight types of woodpeckers in Florida, I frequently observed five in the pinewoods. The beetles and larvae living in the dead and dying trees attracted downy woodpeckers, yellow-bellied sapsuckers, red-bellied woodpeckers, hairy woodpeckers and the impressively large pileated woodpecker.

Hawks and owls were also drawn to the dead trees, especially in areas where several branchless slash pines created open airy spaces.  While perching on the snags, predators could survey their surroundings, swooping down to capture rabbits, rodents, songbirds, snakes and other prey.


The dead trees also became nurseries for owlets and baby woodpeckers.  The birds drilled entry holes in some of the older, larger diameter pines turning the snags into places to raise their young.

Although I haven’t seen raccoons and other cavity-dwelling animals using abandoned owl nests, that doesn't mean they’re not taking advantage of the dead pines too.

When we first purchased our property in 1991, the land was a barren expanse of acreage with only six noticeable trees on it.  I felt protective of each one.  If one of those six trees had suffered the same fate that the slash pines do now, I would have been devastated.

Much has changed over the last two decades not the least of which is the land’s transformation from fields to forest and my attitude about the process.  Now, instead of seeing a tree’s death as an end, I view it as just another phase in the life of the land.  I now know that the loss of one or more trees is but a beginning.  New plants spring up in the sunny spots created when trees die and fall to the ground.  Insects come to feed on the decaying tree bark.  Birds come to eat the insects.  Predators come to eat the birds and other small animals that live in the piles of brush decomposing into the ground.  It’s all part of the circle of life.  A continuum without a starting or stopping point.


As much as I love trees, I love even more watching the ebb and flow of life itself.
Posted by sherry boas at 5:38 AM