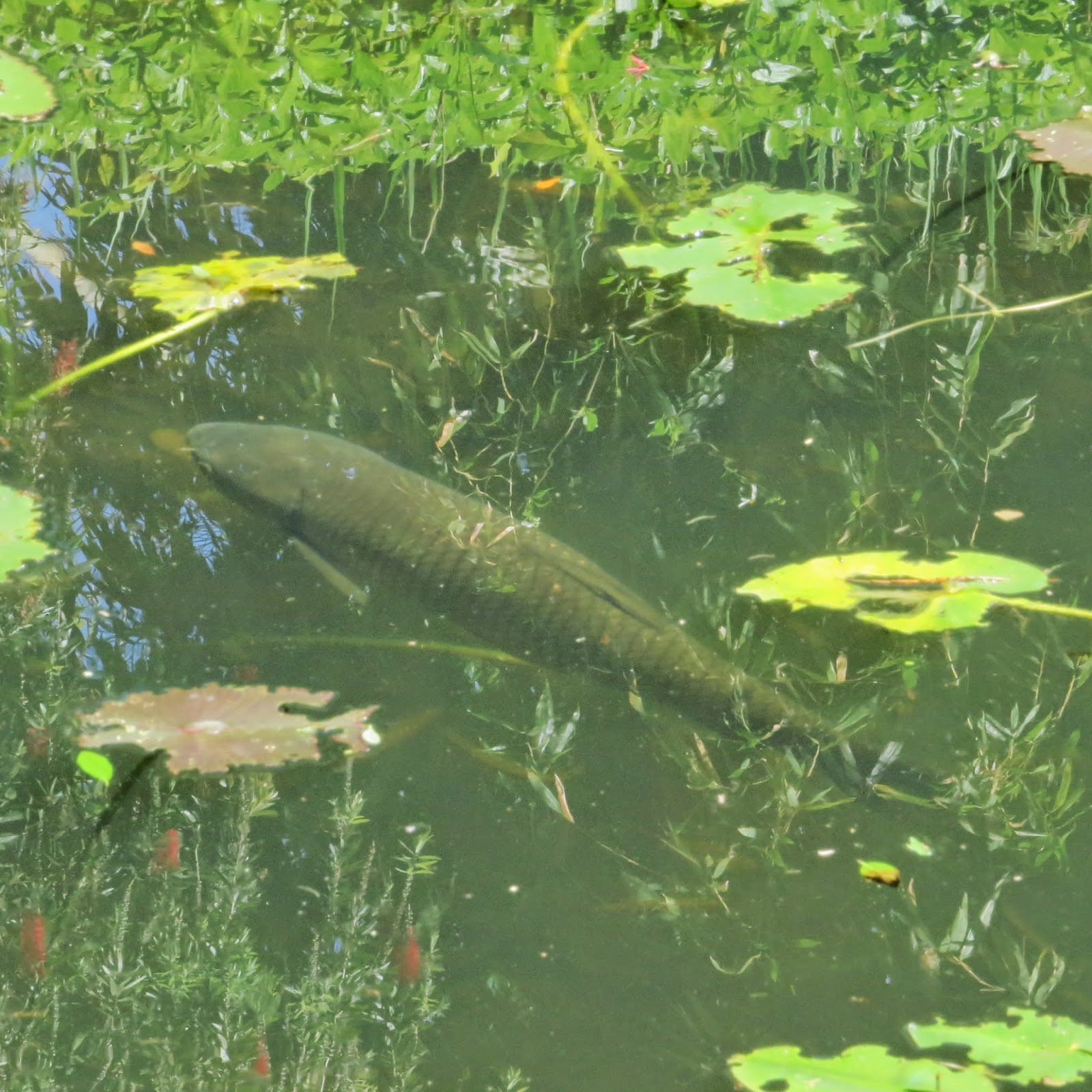 Our triploid grass carp must be happy. All the rain we had in December made lake levels rise, submerging stretches of grassy shoreline in shallow water. The carp, which eat only plant matter, have been munching on this newfound fodder ever since it entered an aquatic state. 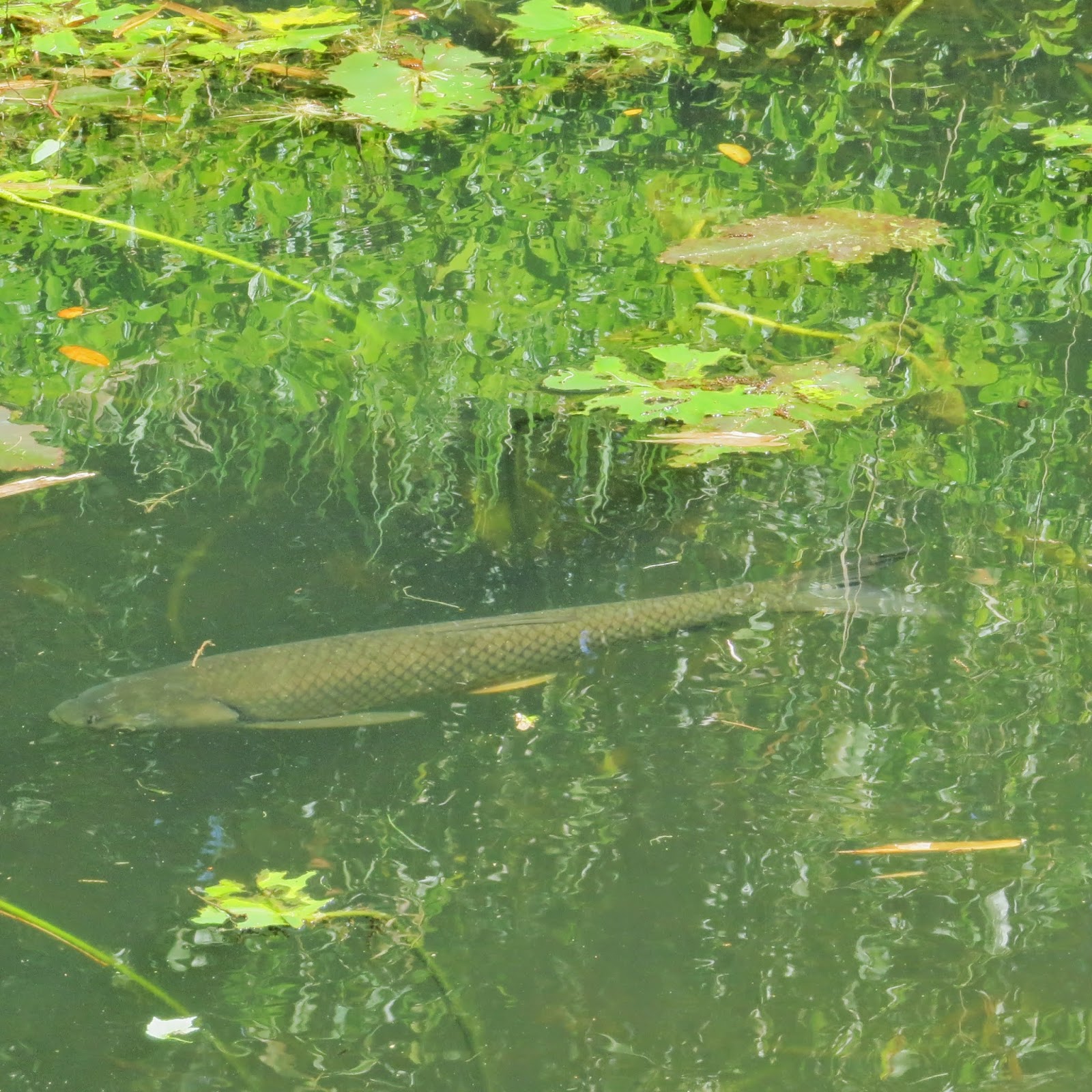 When I go for a row, I often see the carp tugging at the stems and stalks of leafy weeds. The fish are so intent on feeding, they often don't realize I'm close until I'm practically on top of them. Then they startle, making big splashes in the process, as they swiftly swim away from my aluminum skiff.

Triploid grass carp have been eating wetland plants in our lake since May 2006. We purchased our stock during a period when the 12-acre pond was so clogged with floating weeds we couldn't swim without becoming entangled in stringy plants.

Although other methods of ridding the lake of weeds were suggested — removing them by hand (impractical), hiring a company to mechanically remove weeds (expensive) and using herbicides (environmentally questionable) — we opted for the carp. The idea of stocking the lake with an adequate number of plant-eating fish seemed like a practical, affordable and environmentally sound approach.

The grass carp, Ctenopharyngodon idella, are members of the freshwater fish family Cyprinidae, which also includes the minnow, goldfish and golden shiner. They are native to rivers in Siberia and China that flow into the Pacific, but now more than 90 countries around the world raise grass carp for aquatic weed control and aquaculture.

The fish's introduction to Florida's lakes began in the 1970s as a means to manage the extremely invasive weed hydrilla. Although grass carp were successful at controlling hydrilla, their voracious appetite for herbaceous plants raised concerns. If they reproduced in the wild, they might destroy valuable wetlands, swamps and waterfowl feeding grounds. Because of these concerns, scientists developed a means to genetically manipulate grass carp chromosomes so they have three sets rather than two, resulting in the production of sterile fish. Today, triploid grass carp is one of only two exotic fish in Florida — peacock bass is the other— that can be legally stocked in fresh water once a permit is issued.

To begin the process of procuring the carp, we contacted the Florida Fish and Wildlife Conservation Commission, which sent a representative to assess our situation. The FWC approved a permit for 75 triploid grass carp. We drove to a hatchery in Center Hill to pick up our stock of 10- to 12-inch-long fish placed inside several water-filled plastic bags in cardboard boxes.


When we arrived home, the three of our four children who were there at the time helped carry the boxes down to the lake where we opened the bags, releasing the fish into the water.

Looking back on pictures I took that day, I'm struck by the passage of time. In 2006, our youngest son was 14 and still looked like a gawky teen. He now is a tall, lean 23-year-old on the cusp of completing graduate school. Almost as impressive is the growth of the fish themselves. Our once small fingerlings are now aquatic behemoths approximately 36-inches long with an estimated weight of 40 pounds.

Over their expected lifespan of 10-plus years, triploid grass carp grow extraordinarily large. The biggest one ever recorded weighed 99 pounds with a length of 4-feet, nine-inches. When I look at the size of the grass carp in our lake, it's hard to believe they're related to minnows.

It's about time to contact the FWC again to renew my permit. It's going on nine years since we introduced our stock of triploid grass carp. I don't know how many of the original 75 are still alive — probably not many — but even those fish that have survived the ospreys, otters and alligators will soon be reaching the end of their natural life.

It may not be the right answer for every situation, but in our lake, triploid grass carp proved to be the perfect solution for an aquatic weed problem. Not only did these underwater grazers enable us to swim again by consuming the plants that clogged the water, they've also given us hours of entertainment in the process as we've watched them grow big on a diet of weeds.

I hope our carp are happy because I'm sure happy we have them.

Read more about our experience with triploid grass carp here:
Grass carp eat lake weeds for 17 months and grow huge
Posted by sherry boas at 6:28 AM