As I rounded the bend toward home, a flock of bluebirds appeared. I thought they might. 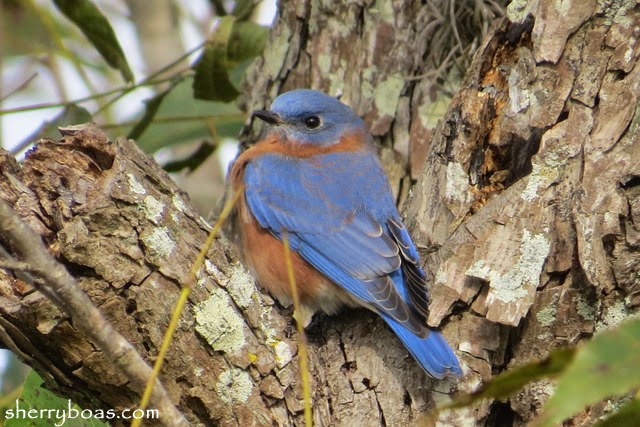 Bluebirds seem to like my neighbor’s pasture, a broad stretch of abandoned groves, rundown buildings and open fields where a small herd of cattle graze. When the birds are not flitting about the grassy expanses in search of insects and seeds, they perch on fences, posts and overhead utility wires. Even though the unpaved road is dusty and bumpy, I often take that route home because I know seeing them will brighten my day. 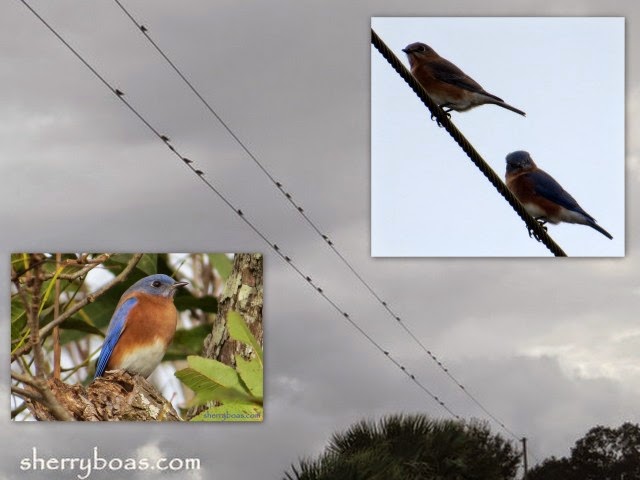 January is prime sighting season for these cavity-dwelling members of the thrush family. Although bluebirds live year-round in Florida, their population swells during winter months when northern birds migrate south.

The Eastern bluebird, Sialia sialis, is related to the American robin but weighs one-third less and is about two inches smaller than its red-breasted relative.


These compact bundles of blue, orange and grayish-white feathers are easy to spot, especially when perched on a fence post or flying from tree to ground in search of insects. Both sexes share the same attractive colors, but the hues are more subdued on the females.


My neighbor’s pasture provides just the kind of habitat Eastern bluebirds prefer — acreage close to water with open fields and minimal undergrowth bordered by woods with a scattering of dead trees. The dead trees are important because snags attract wood-drilling birds like woodpeckers. Since a bluebird’s beak isn’t strong enough to do the drilling itself, it must seek out pre-drilled homes to raise its young. 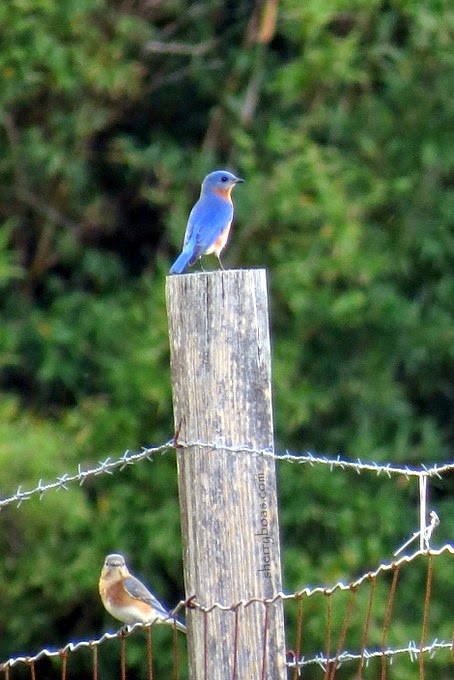 Many critters, especially those such as bluebirds with specific nesting requirements, suffer when dead trees are cut down or when land is cleared for development. That’s what happened during most of the 20th Century. Bluebird populations declined because of habitat loss plus increased pesticide use and the competition for nesting sites from two non-native birds, the European starling and the house sparrow.

Fortunately, bluebirds were lucky. They’ve made a comeback due, in large part, to the installation of nesting boxes on public and private land.

In March 2004, 10 bluebird nesting boxes were installed at P.E.A.R. Park in south Leesburg through the combined efforts of the Oklawaha Valley Audubon Society, the PEAR Association and Boy Scout Troop 254 of Howey-in-the-Hills. Since then, more boxes have been added, resulting in scores of fledglings making their way into the world. And P.E.A.R. Park is not alone. Individuals and volunteer conservationists have installed bluebird nesting boxes in many places throughout the region.

There aren’t any bluebird boxes on our property yet, but I hope there will be soon. Building one doesn’t look difficult or expensive. A single box can be built from a 52-inch long one-by-six cypress board, although pine or red cedar wood works too. Pre-built boxes and do-it-yourself kits also are available online and at many retail outlets.
Click here for bluebird nesting box plans from the North American Bluebird Society

Once a nesting box is obtained, it should be mounted on a post between four to seven feet above ground in an open area six feet away from limbs or fences with the entry hole facing north or northeasterly. Protecting the nest from predators by installing a guard around the post is important, as is cleaning out the box annually. 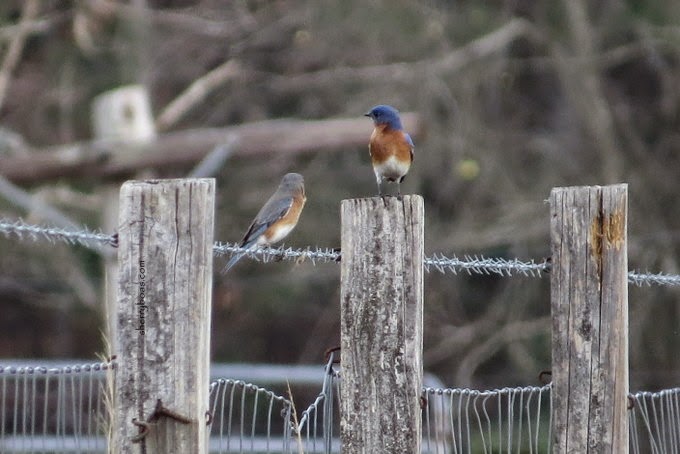 The Eastern bluebird is an uplifting creature. Observing bluebirds on my neighbor’s land makes me happy, but I’d be even happier if I knew they were nesting on land in my control. I can follow the park’s lead by putting up nesting boxes that will encourage bluebirds to set up residences. I may not be able to stop the bulldozers from knocking down dead trees and destroying habitats, but I can help provide at least one species with the ability to survive.

I know it’s just a little step, but I appreciate the value of small beginnings. Something tells me that bluebirds do, too.
Posted by sherry boas at 7:28 AM