I was heading down our unpaved road on the way to town.  It's a bumpy road. I was going slow. To my right is an 80-acre forest slated to become a subdivision. To my left are a few of our rental homes on large lots surrounded by bamboo. Something in one stand of Bambusa multiplex caught my eye.  I slowed to a stop then backed up for a closer view.

Two snakes were entwined in the 'boo.  At least I thought that's what I saw.  It was hard to tell from inside the car so I grabbed my camera and got out for a closer look.

Yes!  Definitely snakes! (I love snakes) Two black racer snakes were entwined in a tangle of love.  Reptilian whoopee in a clump of bamboo.


Although this was the first time I spotted two black racers mating, I've seen racers many times before. Southern black racers (Coluber constrictor) are the snakes I see most often in the garden and around the house. Harmless to people but deadly to rodents, birds, lizards, other snakes, frogs, toads and insects, I consider black racers to be an essential part of nature's arsenal.  Pest control at its most basic level.


This slender reptile can grown up to 6 feet long with a solid black upper side, a dark gray to black belly, white chin, white throat and brown eyes.


Male racers become sexually mature on or slightly before their second year but females take a year or two longer to reach sexual maturity. After mating, a female may lay up to 30 eggs that hatch about 3 months later. When they do, the 6-inch-long babies are fully prepared to hunt and live on their own. That's good because after a week or so of guarding their newly laid eggs, the parents leave their future offspring to fend for themselves.

Great egret greets the day with a smile and a laugh

An unoccupied bluebird nesting box next to Hour Lake is a popular perch for a variety of birds.

On a recent dawn, a Great egret took advantage of this lakeside platform to practice its morning ablutions by preening, stretching and posing in enough postures to satisfy my seemingly unquenchable photographic thirst.

Below is a sampling of the egret's antics.  Hope you enjoy them as much as I did.

Dolphins, dawn and a calm lagoon

Early morning. Chilly. Instead of biking to the beach I decided to drive.

Instead of my usual haunts - 27th Ave. Beach or Hiles Blvd. - I rambled on down to the lagoon side of Bethune Beach.

It was a beautiful morning.  Cold but calm.


I hoped to see some dolphins or manatees and was not disappointed. Shortly after walking down the boardwalk overlooking Indian River, I noticed a moving stream of ripples in the water.  A telltale sign that aquatic company was heading my way.

Two dolphins swam swiftly from the north into the small cove by the park.  I was mesmerized by their antics.


As captivated as I was by the dolphins arrival, I was equally awed by the burgeoning day. I felt as if I was embraced by beauty!


In addition to dolphins, a great egret and several pelicans had gathered in the cove.


Most likely the birds were there for an early morning feeding. Probably, the dolphins were too. But I like to imagine that they, like me, had come to greet the day. Quiet time. Calm water. A new day getting under way.  Ah...the wonder of it all!

Posted by sherry boas at 2:16 PM No comments:

One month. Many birds.

Below are some - not all, but a good sampling - of the many birds I've enjoyed photographing during the month of January 2018.  Most were taken at our home in Groveland but I've included a few shots from New Smyrna Beach.  Usually we split our time equally during the two locations but this January, circumstances and weather kept us away from the beach much more than usual.

The eagle has landed

I was on my way to town - taking back roads, as usual - when a flash of white caught my eye.

Eagle.  On the ground.  Completely occupied with something it was eating.

I pulled over for a better look. 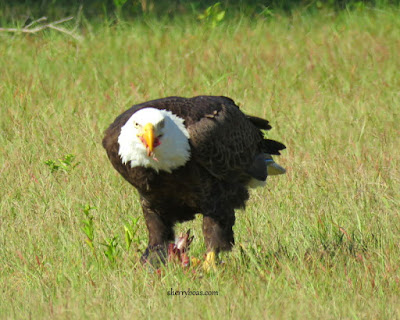 While the American bald eagle is not an uncommon bird in Central Florida, sightings are infrequently enough to give me pause.  And pause is precisely what I did when I realized what I'd chanced upon.

The eagle - a solidly built bundle of black and white feathers with a huge golden beak, penetrating eyes beneath heavy brows and sharp talons protruding from a sturdy pair of strong legs - paid me no heed as it tore chunks of meat off its unfortunate prey. 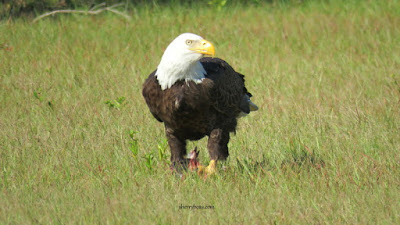 Every few seconds the majestic bird - adult American bald eagles can weigh up 14 pounds with a wingspan of 5.9 to 7.5 feet - it would stop eating to check its surroundings before continuing to tear apart flesh with its powerful beak. 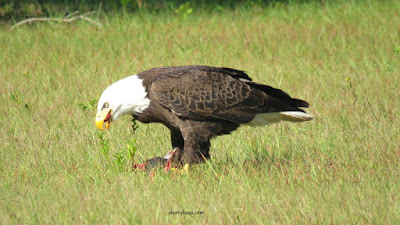 As I sat in my car taking pictures with through the open window, I tried to figure out what animal the eagle was eating.  Bald eagles are opportunistic feeders who are just as likely to feast upon roadkill as they are prey they've stolen from others or captured themselves. 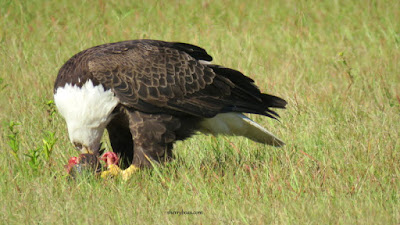 Although it was difficult to tell from my seated vantage point - I hesitated to get out of the car lest I scare the bird away - the size, shape and color of the critter caused me to conclude it was an armadillo. 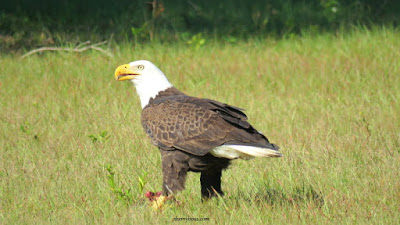 Whatever this particular raptor was eating, it wasted no time consuming as much of its found delicacy as possible. The reason why it was rushing soon became obvious.  Vultures.  Lots and lots of vultures. 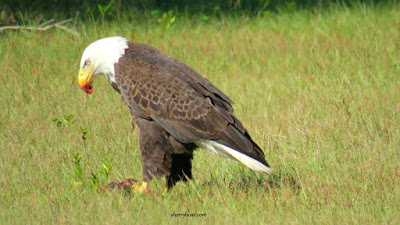 While bald eagles may be masters of stealing fish away from ospreys and chowing down on carrion along roadsides, a murder of vultures is just as eager to steal dead meat away from a lone eagle. 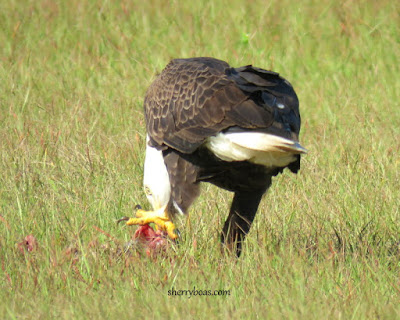 And indeed, that's precisely what happened.  The vultures - there must have been a dozen waiting in the wings for just the right moment - suddenly flew close enough to the eagle to scare it away.  The eagle took flight and the remaining carcass of the chewed apart animal was soon set up by a new group of hungry birds.

For those who wonder (queue my husband) why I stubbornly choose back roads instead of more direct routes from Point A to Point B, an encounter like this is the reason why.

I never know what I'm going to find when I take the long road home but there's always something - often many somethings - to catch my eye and be captured by my camera. This time it was something special - a bald eagle having a feast.  It was a feast for me too.  A feast for my eyes.

Posted by sherry boas at 1:46 PM No comments: