Morning bike ride to see the sunrise. Ralph takes one last swim before we drive back to Groveland while I walk along the shoreline, pick up a washed ashore shell and scratch out a message in the hard packed sand.

Our last day at the beach, at least for this trip. Each of us savoring the moment in our own separate ways. 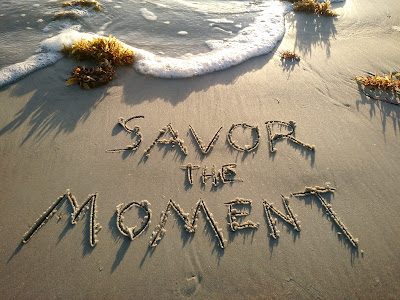 Posted by sherry boas at 6:35 AM No comments:

I can't remember the last time I used the dishwasher.  It was probably when our adult kids and grandkids were all visiting and a rising tide of dirty glasses, cookware and cutlery constantly flowed over the kitchen counters.

Normally when dishes need cleaning - as they do several times a day even with just the two of us at home - I clean them by hand.  A little dish soap, a thin washcloth, a green scrub pad, drying rack and compost bin are all I need to make fast work of a messy kitchen.

Dishwashing is one of many daily activities I think of as mini meditations. Instead of bemoaning the monotony of repetitive tasks like washing and drying dishes, chopping vegetables, brushing teeth, combing hair and hand-watering plants, I try to think of them as mental gateways to mini-vacations. Opportunities for my mind to unwind.

To me, those unpopular tasks provide a means to rest and relinquish woes. They are a chance to focus instead on the everyday pleasures of doing small jobs well. Instead of regretting the time it takes to get such chores done, I try to relish the relaxation mindless activities can provide.

It doesn't always work. Sometimes my mind is too boggled to focus on anything but the patchwork of worries in my head. Ironically, those are probably the times I need mini-meditations the most.

There's an old Zen saying, "You should sit in nature for 20 minutes every day unless you're busy...Then you should sit for an hour." 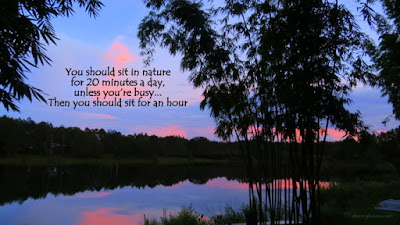 I'm not sure about the 'sitting' part, but I believe there's much to gain from any quiet, introspective time we manage to carve out of an increasingly challenging, crazy world.

Doing the dishes is a simple task. Its successful completion doesn't require a lengthy learning curve or strong skill base. It's also a repetitive task in need of attention several times each day. For those reasons alone, it's the perfect vehicle for meditative contemplation.

Recently, my son Toby and I were discussing the benefits of rumination. As a young twenty-something in search of a better balance in his daily life, he has undertaken a course of online meditations and found the program to be helpful.  Each 10-minute session is leading him closer to mental clarity and direction.

I've never taken a meditation course nor have been a practitioner of yoga yet I feel like I've been meditating for years.  Sometimes I drift off into contemplative mode while out in the lake rowing or while walking through the woods. At the beach, my early morning sunrise bike rides provide a similar effect.  Pulling weeds in the garden and watering plants clears my head while the constant supply of indoor chores also provides a means to escape mental chatter.

Sure, I can use the built-in dishwasher. But I don't want to. I'd rather soak my hands in hot water and suds and attack each platter individually. One-by-one. Lather. Scrub. Rinse. Repeat. If I use the electric dishwasher, my dishes are cleaned, but if I do them by hand, my mind is too.
Posted by sherry boas at 10:03 AM No comments:

I recently drove by my neighbor's field and caught sight of a sandhill crane family.  Mama and Papa Crane were on different sides of the field fence with one baby tagging behind each parent.


The youngins have gotten so big!  The two colts have entered that gawky stage when their legs look overly long for their still-small bodies. 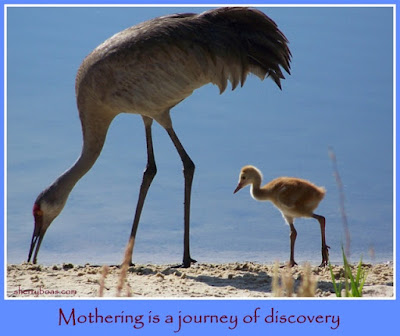 I guess my photo-taking made them nervous because as I stood there clicking away one of the adults rushed over to a broken spot in the fence and scooted through to the other side with baby trailing right behind.


Once Ma and Pa were reunited and separated from me by the fence, any anxiety the birds might have felt seemed to melt away as the tall birds continued on their slow stroll across the field in search of insects and seeds.

I was glad I had a chance to see the crane family - especially the fast-growing colts. What a joy it is to live in an area where viewing these beautiful birds is a regular occurrence rather than a rare experience.

Below is one of many videos I've made over the years of sandhill crane and their babies on our property.  You can find more on my Sandhill Cranes YouTube Channel

I just came in from watching several crows harass an eagle in a tree on our Groveland property. 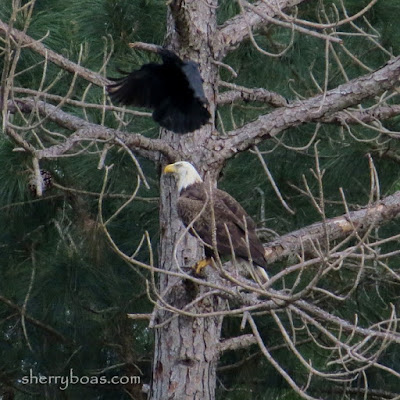 As soon as I heard the birds' loud cawing cries, I knew something was going on so I rushed outside to see what it could be. It didn't take long to locate the source of the commotion - a bald eagle perched high on a pine bough.


The bald eagle may be our national symbol, but to other birds it represents a serious threat to their survival. The regal looking raptor is a royal pain in the flesh to any fish, mammal, reptile, amphibian or smaller bird it sets its sharp eyes upon. It's a skillful raptor who either catches prey in its strong talons or snatches it away from another predator. It's also not above dining on carrion.

The eagle I saw was being attacked by a flock of crows, which is called a murder. A murder is an appropriate name for birds that so ruthlessly defend their territory against perceived dangers. Here on our property, I think of crows as the avian equivalent to a pack of Rottweilers. They're loyal watchdogs with commanding cries.  They won't quit until the threat is gone. I can't tell you how many times the cackling calls of a murder of crows has drawn me outside to witness one wildlife drama or another.

Below is a video I took a couple years ago of several crows dive bombing a bald eagle.


Although crows are always around, I've been seeing them more often than usual now that it's mulberry season.  When the crows are not busy patrolling the property, they take turns dining on some of fruit growing in our orchard.


Since we no longer have a dog to warn us when something unusual is happening, I'm glad crows are here to take up the slack.  I like knowing that while I'm in the house working on a project, a murder of crows is out there watching over our shared territory. Some people might find the sight of so many crows frightening, but to me they're an invitation to adventure. Thanks to crows, I've been privy to fascinating wildlife encounters I might otherwise have missed.
Posted by sherry boas at 3:19 PM No comments:

Learning to get along....

In a recent post (Pelican and dolphin - Playing together or vying for food?) I pondered the possible symbiotic relationship between two animals in search of fish - a bottlenose dolphin and a brown pelican. 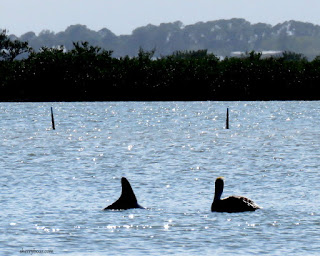 The two critters I wrote about were interacting with each in a small cove off Indian River Lagoon in Bethune Beach.  It was the second time I'd observed the same behavior between a dolphin and a pelican in that location.

Below is a video I took the first time I saw it happen.


In the above video, I'm not sure if the dolphin was trying to catch a fish that the pelican stole away or whether it happened the other way around with the dolphin being the winner in the hunt for dinner. Either way, some sort of symbiotic relationship was taking place, which got me thinking about another encounter involving pelicans that I noticed last November when Ralph and I were biking along the shoreline in New Smyrna Beach.

On that occasion, a seagull was using the pelican to gain an easy meal by stealing fish right out of the bigger bird's mouth.


This type of behavior by seagulls is not unusual.  Pelicans hunt by collecting several fish at once in the large pouch attached to their beak. When their expandable sac is full, they need to shift their catch around before swallowing, a process that usually involves tossing a fish slightly into the air. 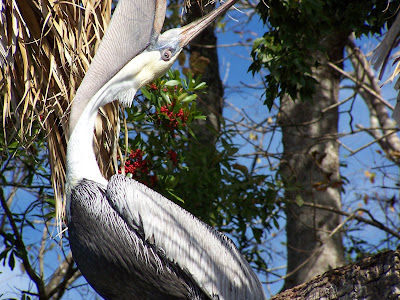 Seagulls flying overhead are on the lookout for just such action. When gulls notices a brown pelican about to eat its catch, they swoop down in an attempt to steal the fish away from the larger bird's pouch just as the pelican is about to maneuver it into position for swallowing. Sometimes a gull will even land on the pelican's head - like it did in the above video - in order to get as close as possible to a potential meal.

Although I doubt if pelicans enjoy being harassed by a colony of gulls, especially when one lands on its head, they seems to accept the behavior as an inevitable part of the process.


There are three kinds of symbiotic relationships in nature: mutualism, commensalism, or parasitism. In mutualism, both animals benefit from the relationship. In commensalism, one member benefits and the other is unaffected, whereas in parasitism, one species generally gets hurt, such as when fleas infest a dog's coat and feed on its blood.


I'm not sure what type of symbiotic relationship happens between a dolphin and pelican or between pelicans and seagulls.  In both cases, no animal is hurt although it could be argued that by having food stolen away, one animal suffers.  More likely, both are examples of commensalism symbiosis.

All I know for sure is that the interconnectivity between organisms is an essential part of life for all creatures on our shared planet. Like the cow that tolerates the cattle egret standing on its back or the pelican enduring the squawks, jabs and thievery of seagulls, we all have to learn how to tolerate stress.  In order to live successful, fulfilling lives, people as well as animals need to get along with each other, even in those cases where interdependence is difficult or detrimental to our individual health.

If a hungry pelican can tolerate a gathering of annoying seagulls trying to steal away its catch, it seems like we humans should be able to endure the slings and arrows of our own adversaries.

Of course, even a pelican has its limit. When it has taken all the abuse it can take, a pelican will spread its wings and fly off to fish elsewhere.

Yet another lesson from our feathered friends. Breath in...breath out...move on.

Posted by sherry boas at 6:22 AM No comments: