A picture. A poem 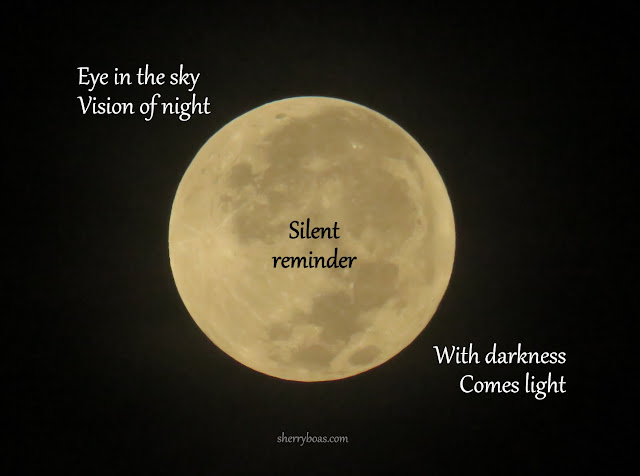 Can't get out! Spiderweb has us trapped!

I was in the kitchen working on my second cup of coffee when I heard my husband shout to me from the hallway on the west side of our house.

"Come quick!  And bring your camera!"

Not one to miss what I assumed would be a wildlife encounter since Ralph was calling from the room leading to his vegetable garden, I wasted no time heeding his command.

I'm glad I did because a large, colorful yellow and black argiope spider (Argiope aurantia) had woven an incredibly broad and beautiful web across our house's western exit.

From where we both stood looking out through the door's 9-pane windows, Mama Argiope's 2-inch long body hung upside down smack in the middle of its web's distinctive zigzagging center.

The black and yellow argiope is a species of orb weaving spider also known as a yellow garden spider, golden garden spider or writing spider, but it can also be called 'Charlotte,' because the spider in E.B.White's classic children's book, Charlotte's Web, was an Argiope aurantia.

Although quite harmful to insects - argiope spiders dine on whatever flying insect unwittingly becomes entangled in its sticky web - orb weavers present no danger to people. Quite the opposite. Argiopes are a gardener's friend because their diet often contains pests that would otherwise damage plants.

Unfortunately, that positive attribute isn't enough to dispel its unpopularity. Although Ralph and I appreciate spiders, most people don't.  As Wilbur the pig demonstrates in the dialog below, despite his friend's beneficial contributions to society, Wilbur finds its eating habits less than endearing:

[a fly lands in Charlotte's web]
Charlotte: Just a minute, Wilbur.
[she climbs up and wraps the fly]
Charlotte: He'll make a perfect breakfast for me.
Wilbur: [shuddering] Ooooh. You mean you eat flies?
Charlotte: Why, certainly. I eat anything that gets caught in my web. I have to live, don't I?
Wilbur: [nervously] Why, yes, of course. Do they taste good?
Charlotte: Delicious.
Wilbur: LECCH!
Charlotte: Course, I don't really *eat* them, I drink their blood. I love blood.
Wilbur: [gasps] Oh, please don't say things like that.
Charlotte: Why not? It's true.
Wilbur: But it's *cruel*.
Charlotte: Well, *you* can't talk. You have your meals brought to you in a pail. Nobody feeds me. I live by my wits.
Wilbur: It just seems an odd sort of diet.
Charlotte: Do you realize that if I didn't eat them, bugs would get so numerous, they'd destroy the earth? Spiders are really very useful creatures.

As Ralph and I stood inside looking out, it dawned on me that the only way to get into the garden without damaging the spider's web was to duck down and scoot under it, which I promptly did.

Once outside, I noticed that the female argiope was not alone.  Curled up in an upper corner of the web was a male argiope, much smaller than the female, as male spiders tend to be.

Like their human counterparts, male web weavers spend much of their life in search of a partner with whom to mate. When they finally find a female of their species, they build themselves a tiny web in a corner of the female's web and try to entice her with music made by plucking the web's glittering strands. Each vibrating pluck of the strings sends a message that the male hopes will entice the female spider to engage in a bit of amorous action. However, unfortunately for the male, there's no happy ending. Once coitus is achieved, the male spider dies and will likely be consumed by its so-called partner.

Below is a video I took of the spider - of both spiders - in the web outside the hallway door leading to Ralph's vegetable garden.

Read more stories about Argiope spiders by clicking on these links

Posted by sherry boas at 3:52 PM No comments:

Another early morning at the beach

Ralph and I arrived at New Smyrna Beach yesterday afternoon and I couldn't wait for morning to get back on my bike, ride down to the ocean and watch the sunrise.

This is the view that greeted me as I biked onto the hard-packed, rain-soaked sand this morning shortly before sunrise, just after high tide. Dark, heavy clouds hung low over the water but in the distance, a strip of brightness lit up the horizon like a brazen flare.

As I biked south, streaks of pink light streamed across the still-dark sky. 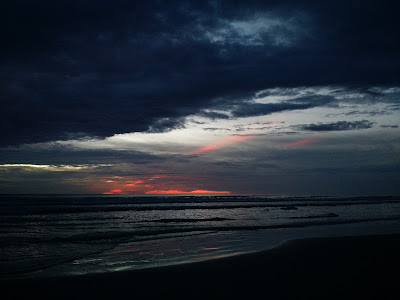 Looking southward instead of east, I inhaled morning calmness along with the view.  Few people were out and a slight breeze kept the sand fleas away as long as I kept moving. 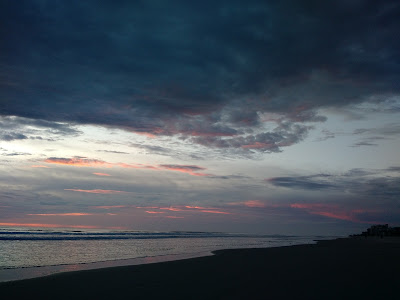 More pink light filtering through the cloud cover hinting of illumination soon to come. While I usually focus on the ocean view or north-south vistas as I bike along, this morning I paid attention to the westerly sky where random clouds received a dash of color.


When I reached the stairway at Watts, I stopped to juggle but once I stopped moving, the sand fleas or no-see-ums zeroed in on my body, forcing me to cut short my morning stretches and juggling practice and run down into the ocean to take a quick dip in the warm and soothing brine.

Before heading back to my sleepy husband, I paused to write a few messages in the sand. 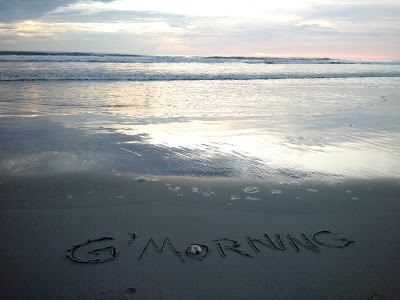 
Before arriving back at 27th Avenue, I stopped to take a video of two cormorants in the shallow water.  Cormorants are not birds I normally associate with the beach. I see snowy egrets (like the one in the video) all the time as well as willets, pelicans, plovers, gulls, terns and great blue herons.  But this morning was the first time I noticed a pair of cormorants - birds I normally see at our Groveland lake - in the ocean.  As I watched them in the water, I couldn't help but wonder if they were frolicking or feeding. Most likely, the latter, but maybe (I like to think maybe) just a bit of both?


By the time I left the cormorants, the sky was much brighter than it had been when I started out. I was now almost back to where I began with just a couple more images to capture before leaving.


Despite it being a Saturday morning on Labor Day weekend with dense cloud cover starting to give way to speckled light, few people were out on the sand. That won't be the case in a couple hours when this same stretch of beach will be blanketed with beach-goers on holiday.

Gulls may be noisy, greedy, unpopular birds but I never tire of seeing them, especially when they stand on a pier surveying a domain that's as much (maybe more...) theirs than ours.

Watching that gull on a still-quiet morning on what soon will be an extremely busy beach day, reminded me that the world belongs to us all - the large and the small, the winged, wingless, clawed, scaled, finned, furred and feathered.

It's ours to protect, not to neglect.  It's ours to preserve, not to destroy. It's ours and, hopefully, it's their world too, for as long as we share and take care for its many wonders.