“Don’t use that door,” I told my husband as he was about to go outside.  “You’ll break the spider’s web.”

“What web?” he asked absentmindedly, adding that he’d already gone out and come back through the same door earlier today.

“Well, I guess I mean the web I saw there yesterday,” I said with a twinge of sadness.

I felt bad, but not too bad because I knew the spider that lives by the door rebuilds its web on a daily basis.

The Black and Yellow Argiope (Argiope aurantia) is a beautiful orb-weaving spider with bright yellow and black markings on its oblong body and long orange and black legs.  It’s also huge, about the size of an infant’s hand.  Although big, it’s harmless to people.  But bugs…well, it’s far from harmless to them.  Like other orb weavers, this carnivorous hunter makes fast work of pesky insects like flies, wasps, aphids, gnats, mosquitoes, moths, grasshoppers and palmetto bugs.  It catches them in its distinctive web.

Do you remember the message-writing spider in Charlotte’s Web, E.B. White’s classic book?  Well, Charlotte was a Black and Yellow Argiope, also known as a writing spider.  She is easy to identify because in the middle of her web she weaves a series of thick white zigzags that look like writing, hence the nickname. 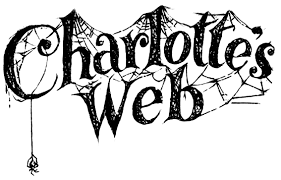 Lately, I’ve been seeing Argiope aurantias everywhere.  They’re in the vegetable and flower gardens and under the house eaves.

In the rose bushes, they’ve stretched their nets from one stem to another.  In the crepe myrtles, they wait for prey to land on sticky silk strung between branches.

When I take a walk in the woods, I have to be careful not to run into a web.  The center part has a diameter of about two feet held in place by five or six anchors stretching up to three-feet away.  Often when I’m out rowing, I spot a Black and Yellow Argiope glistening in the sun as its web, suspended from trees along the shoreline, sways in the breeze.

The spider, whose web anchors blocked the side entry, had been living under the eaves next to the door for most of the summer.  That’s typical of this species.  Once a female finds a suitable site, she stays put unless the food supply diminishes or the web is destroyed.  I say female because in the arachnid world, females rule.  It’s the female who decides where she’ll live and with whom she’ll mate.

The male, who only mates once, is about a third of the size of the female and lacks her colorful markings.  Once a potential partner is located, the male weaves a small web next to hers where he may have to compete with other spiders vying for her attention.

Males woo by plucking a taut strand in the female’s web in the hope that his potential mate will respond positively to his good vibrations.  If she doesn’t, she may eat him instead.  She might do that anyway even if she does accept his musical overture.  After mating, females sometimes consume the male, a process known as monogyny or sexual cannibalism.

Because of monogyny, the male spider’s lifespan is short, usually under a year.  Female golden orb weavers, however, can live for several years in warm climates like Florida.  After mating in late summer, the female will produce a brown, papery egg sac about the size and shape of a fig that she attaches to her web.

Inside the sac are 300 to 1400 eggs that will hatch in the spring.  Many of the young will not survive predation by parasitic insects, birds and lizards.  Those that do, venture off to build new webs, find mates and continue the cycle of life.

As regular readers of this column know, I’m quite fond of spiders.  I appreciate the way they control pest populations and consider their webs to be works of art.  I find their individual behaviors and markings to be just as fascinating and special as those of birds or other wildlife.

Although Ralph may have been unaware of the Black and Yellow Argiope’s presence outside the entry to our house, I’d had my eye on her for months.  I realized she’d made a mistake when she decided to anchor her web in front of our doorway but was confident she’d recover if some of the anchors were broken.

“Come see the spider,” I said to Ralph a few days later.  This time he knew which spider I meant.

“That’s quite a web,” he admitted as he looked at the zigzag design in the web’s center upon which the Black and Yellow Argiope sat.
Nearby, a much smaller, less colorful spider awaited his fate.

I gave my husband a hug.