A good bug with a killer name

I sure wouldn't, but then I don't make a habit of hiding in curled up leaves until unsuspecting prey wanders by. I don’t grab the intended quarry with long, sticky legs to inject enzymes that paralyze bodies and dissolve tissues. And I certainly don’t return later to suck up those liquefied tissues with a straw-like appendage called a stylet.

But that's what Zelus longipes Linnaeus, better known as the milkweed assassin bug, does. Such blatantly brutal behavior is what earns this colorful predator its killer moniker.

The other day, I watched as a milkweed assassin bug did his dastardly deeds.

I was outside enjoying the sight of beneficial wasps flying in and out of the spotted bee balm plant when...

...I noticed all the queen butterfly caterpillars munching away on the tropical milkweed leaves.

As I leaned in for a closer look, I became aware of an orange and black insect on a milkweed leaf, too.

At the time, I didn’t realize it was an assassin bug. All I knew was that it was brightly colored and interesting to watch, especially when it probed a stinkbug with a long thin appendage. Although the stinkbug looked dead, I later realized the assassin bug had actually immobilized it by injecting potent chemical compounds into its body.

While I watched, the milkweed assassin bug stood over the stinkbug, patiently waiting until its prey was completely inert. At that point, the predator retracted its stylet and stepped away as the stinkbug rolled forward on the leaf, accompanied by two ants that seemed to be anticipating the feast.

Murder was taking place on the face of a tropical milkweed leaf with two ants and I as the only witnesses. However, actions that seem brutal on a human scale are merely a means of survival to wildlife. It was not my job to interfere or intervene.

Because it has the ability to inject a very powerful toxin into its victims, a milkweed assassin bug can consume prey bigger than itself, but doing so has its risks. The dissolved fluids from large victims take a longer time to ingest. This means the milkweed assassin bug is exposed to potential predators like birds for more time than it would be if it dined on smaller prey. A large meal reduces hunting time but increases vulnerability. No matter what the species, life is full of plusses and minuses.

The day after I first discovered the milkweed assassin bug on the tropical milkweed leaf, I went back to see if it was still there. It was.
Only this time, it was not alone.

The long-legged limbs of two look-alike orange and black bugs were entwined in an amorous embrace. The third essential activity of all creatures — reproduction — was underway. 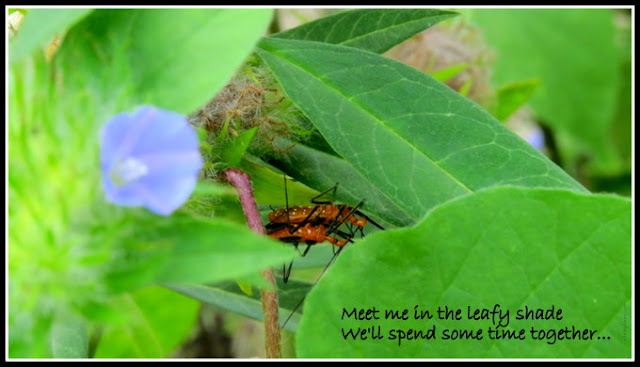