The orange blooms of flame vine light up the landscape

If you like bold colors, you’ll probably love the cascading blooms of Pyrostegia venusta, commonly known as flame vine or flaming trumpet. 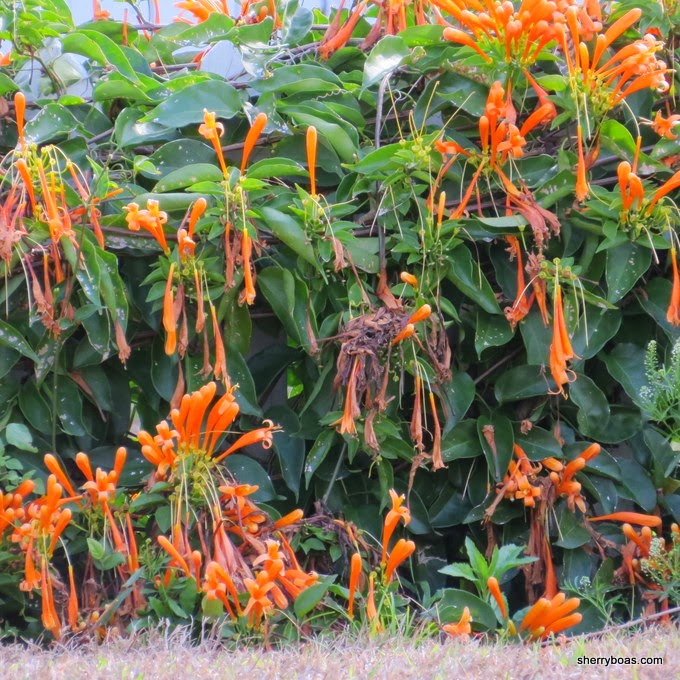 Pyrostegia venusta is one of those you-can’t-help-but-notice-me vines. The bright orange tubular blooms of this vigorous climber jump out of the landscape like a flash fire, blazing a colorful streak across the dull winter landscape.

Many flame vines have been catching my eyes over the past few months while driving around Central Florida. Occasionally I’ve passed “well behaved” vines that cover a fence or tumble over a trellis in an attractive, neat fashion. More often than not, however, the vine’s height-hungry tendrils have reached up and out of control. 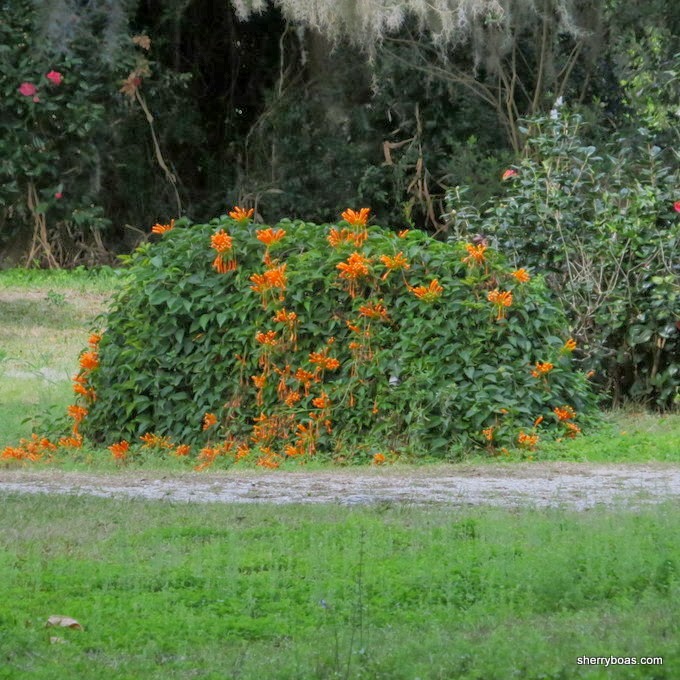 Native to southern Brazil, northern Argentina and Paraguay, flame vine was first spotted in North America in the mid-1800s and quickly made its way across the southern, warm-weather states. Other vines may be satisfied with creeping along the ground, but not this one. It insists upon upward mobility. Once established, a single vine can grow to be 80-feet-tall and can cover entire tree canopies, smothering the trees that lend it support.

Although not listed as an invasive plant species by the Florida Exotic Pest Plant Council, the rampant growth pattern of this vine makes it unsuitable for many landscapes, including mine. As much as I admire its beauty, I’ve also noted its aggressive behavior. I don’t want to add yet another difficult-to-control plant to my own landscape. However, that doesn’t keep me from appreciating it elsewhere.

I still remember the first time I noticed this flower. It was many years ago when I was new to the area and exploring some of the older downtowns. I was driving along Main Avenue in Minneola en route to downtown Clermont when, on my left, I passed by an older two-story wooden building housing the Just My Style Hair Salon & Spa. In front of the structure was a white arbor and low fence completely engulfed by what I later learned was flame vine. What a sight! The plant’s orange blooms were — and continue to this day to be — absolutely stunning. 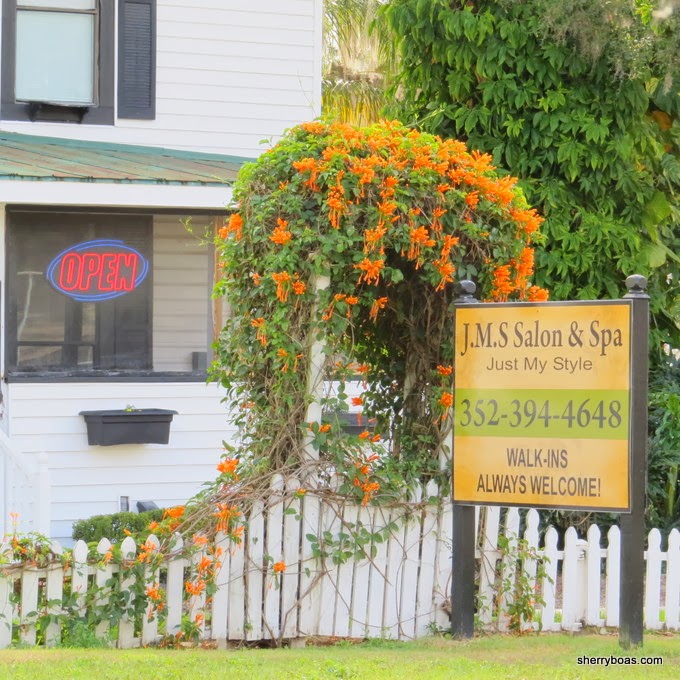 While people like me admire these climbing beauties from afar, hummingbirds take a more hands-on — perhaps I should say, “heads-on” — approach. The nectar-producing flame vine flowers, which also attract bees, are just the right shape to accommodate a hummingbird’s long bill. The vine also draws songbirds but for a different reason. The dense, tightly woven vines provide well-hidden places to build nests and raise young. 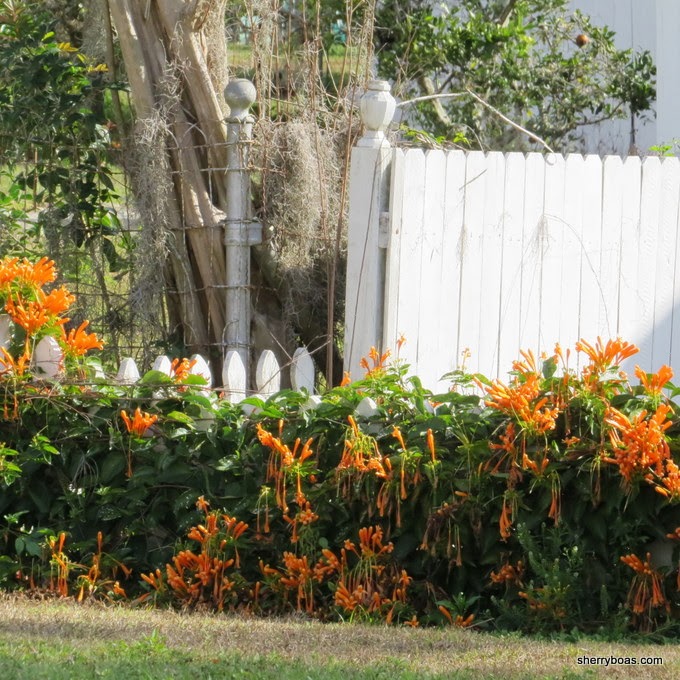 Flame vines have not finished blooming. They should continue producing prolific amounts of tangerine-colored flowers throughout March and early April. So the next time you’re driving down the road and pass a flash of color spread across the treetops or notice a fence line covered in a flush of radiant blossoms, you’ll know you are passing one of nature’s boldest bloomers. Flame vine may not burn like a fire but its beauty will be emblazed on your memory for years to come.
Posted by sherry boas at 5:19 AM No comments:

It’s interesting how a pretty plant can lose its attractiveness once its true nature is revealed.   That’s what happened with me and cogon grass.

Cogon grass (Imperata cylindrical) is a non-native perennial listed as one of the Top Ten Worst Weeds in the World in the Global Invasive Species database.

Plants on the Ten Worst Weeds list don’t come by that dubious honor without reason. To do so, they must prove to be incredibly invasive, able to survive in a variety of habitats under a wide range of conditions, be difficult to eradicate and be harmful to native plant and animal communities.

Native to southeastern Asia, cogon grass now covers approximately 500 million acres in 73 countries. It entered the United States in the early 1900s and quickly spread across several southern states. In Florida, where it covers about 700,000 acres, it is listed as a Category 1 invasive — the worst kind — by the Florida Exotic Pest Plant Council.

I didn’t pay much attention to cogon grass until 2013 when I noticed a few patches growing on our property. Before then, I used to drive by fields of white seedheads blowing in the wind and, while I wasn’t sure what kind of grass I was looking at, I admired its beauty. There were times when I even added a few of the fluffy white tops to dried flower bouquets because I thought the feathery white seedheads were so pretty.

Bad Sherry! Had I realized my innocent bouquet gathering contributed to the rampant dispersal of this nasty perennial, I would never have done it.

Wind currents can carry the white feathery seeds — about 3,000 seeds per plant — several miles, but the main way cogon grass spreads is through a network of underground stems called rhizomes. Although the grass can grow up to five feet tall, more than 60 percent of its growth is below the surface in a dense web of sprawling, dirt-hugging roots. Most rhizomes are within six inches of the surface, but some reach four-feet deep into soils ranging from sand to clay to loam and peat.

Like most invasive plants, cogon grass isn’t fussy about where it grows. While it prefers full sun, it can also take root in shady locations. In Florida, cogon grass poses a threat to the health of many pine forests by reducing tree survival and growth. It razor-sharp blades can cut wildlife when they try to navigate through the dense foliage, and its high content of the element silica makes it an unpalatable food source.

Once you become aware of its appearance, you’ll notice cogon grass in a variety of places. I see it along the Florida Turnpike and in fields bordering quiet country roads as well as along busy thoroughfares.

When I realized cogon grass had invaded our property, I figured we could get rid of it by mowing it down. Unfortunately, it’s not that easy. Rather than ceasing its spread, mowing increases it by spreading seeds and rhizome fragments from one place to another.

Because of its intense rhizome system, pulling out clumps doesn’t work either. It isn’t even possible to eradicate cogon grass by burning because it thrives when other species succumb to the heat and flames. The only effective control seems to be repeated applications of herbicides such as Roundup. Even then, complete eradication might take years and during that time who knows how many new cogon grass colonies the wind will carry onto the land.

The more I learn about cogon grass, the less I like it. I’m not sure what we’re going to do to about the infestation on our property but I do know it has changed my outlook. What I used to think of as ‘pretty,’ I now consider ‘pretty awful.’ Instead of seeing swaths of feathery seedheads as spectacles of beauty, I see the menace they present to the balance of nature. Words alone can’t prevent the spread of this aggressive invasive, but they can’t hurt either. Instead of spreading seeds, help me spread the word.
Posted by sherry boas at 4:47 AM 2 comments:

When I think of Valentine’s Day — reminder: it’s this Friday — I always find myself reflecting back to the days when Sheldon and Bernice Waterman lived across the street from our family in Kissimmee.

Shelly and Bernie’s wedding anniversary was Feb. 14. It was a second marriage for Shelly, the first for Bernie, and although they had no children together, the couple, older than Ralph and me, easily slipped into the role of friends to us and surrogate grandparents to our kids. At the time, we had three children. Our youngest son had not yet been born.

Shelly, a tall slender man with slightly stooped shoulders, was the kind of fellow always ready with a joke to share. As a stripper on a printing press — a job title that lent itself to no shortage of witty remarks — his stories never failed to amuse and were told in a sweet-spirited manner that mirrored his gentle nature.

His counterpart, Bernie, was a short-haired, middle-aged woman who, despite a slightly acerbic disposition, loved our children unconditionally. She was especially fond of my oldest son, Timothy, who shared her birthday. She and my then-five-year-old son could sit for hours playing the card game Concentration (Timmy was a whiz at that game) and still be up for another round the next day.

As a young wife, I often watched my older neighbors with an eye toward gleaning as much knowledge as I could from their relationship. I noticed how much Shelly and Bernie seemed to enjoy each other’s company, how often they smiled at one another and shared private jokes. Although most couples seemed to grow apart as the years went by, Shelly and Bernie grew closer. Whenever Shelly wasn’t at work, he and Bernie were together. Whether it was taking a trip in one of the many RVs Shelly remodeled in the driveway, volunteering at Give Kids The World, going for a bike ride around the community or simply driving into town for groceries, they were two people who acted as one.

We lived across the street from the Watermans for five years before relocating to Lake County. For several years after we moved, we stayed in touch, even visiting each other occasionally. Eventually, however, distance combined with the busyness of raising a young family got in the way. We drifted apart.

Then one day, out of the blue. Shelly called to say Bernie had passed away.

In our culture, we commonly define Valentine’s Day as a day to remember loved ones. Usually that means paying tribute to a family member like a husband or wife. For me, however, an important part of every Valentine’s Day is time spent reflecting upon a couple whose Feb. 14 anniversary epitomized romance, love and togetherness.

I’m sad I lost touch with Shelly and Bernie.  I’m even sadder that Bernie is no longer with us.  But I’m glad this gentle, loving couple was once a part of my life.  Without any deliberate teaching on their part, my neighbors taught me well.  Sometimes Valentine’s Day isn’t just about celebrating those nearest and dearest to us.  It’s also about remembering the unintentional gifts of others.