I noticed it early one morning as I looked out the window: A large tan-colored critter with a smug grin peering out from the hole of a previously vacant birdhouse.

As soon as I saw its exceptionally large toepads, I knew what I was looking at — a Cuban treefrog, Osteopilus septentrionalis. It was so ugly, it was cute. 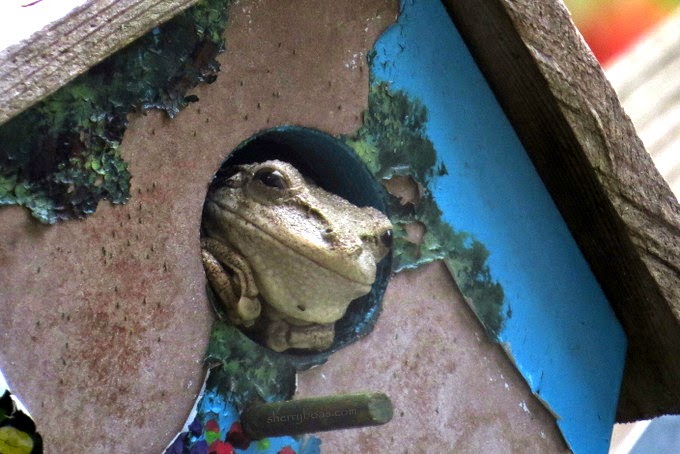 But cuteness doesn’t cut it in conservation circles. Cuban treefrogs have been in Florida for 84 years yet scientists consider them an invasive exotic species mainly because of their voracious appetite for native frogs. Ever since its accidental arrival aboard cargo ships in 1931, this native of Cuba, the Cayman Islands and the Bahamas has been expanding its range from the Florida Keys northward. It currently inhabits 36 of the state’s 67 counties and is expected to keep spreading.

Although Cuban treefrogs also eat bothersome insects, spiders, lizards and small snakes, their consumption of at least five different species of native frogs has earned them a black mark in environmental communities. Some conservationists recommend humanely euthanizing these unintentional residents of the Sunshine State.

I didn’t take that step with the Cuban treefrog in the birdhouse. As much as I appreciate the scientists’ concerns, I am no more likely to kill a non-native frog than I am to end the life of a non-native bird such as a European starling that might have taken up residence in a bluebird box.

The taking of another being’s life is a complicated and highly personal matter. While there are some critters I willingly destroy — mosquitoes, fire ants, houseflies, cockroaches and lubber grasshoppers come to mind — I go out of my way to avoid hurting others. I catch and release wasps that inadvertently get into our house. I never harm snakes, anoles, bees or spiders. I’m not crazy about killing caterpillars that eat the vegetables my husband invests so much time growing. Yet, when it comes to the Cuban treefrog, there are good reasons to consider euthanasia.

According to the Florida Fish and Wildlife Conservation Commission, more than 50,000 non-native fish and wildlife species inhabit the United States, with approximately 500 in Florida. However, only 123 carry the label of invasive exotic pests. To earn that label, a non-native species must cause harm to native species, threaten human health or cause economic damage. In addition to the Cuban treefrog, some of Florida’s other invasive exotic pests include Burmese pythons, Nile monitor lizards, monk parakeets and lionfish.

Much of the reason I won’t kill them is because of the label “invasive exotic pest.” How many years does a species have to live in an area before it is considered a legitimate part of the environment? The Cuban treefrog has been in Florida for more than 80 years, longer than many of the state’s human residents, but it still holds the title of non-native. The Cuban treefrog eats native frogs like the green treefrog and the squirrel treefrog, but so do other non-native species such as domestic cats. No one is recommending the humane euthanizing of pets to solve the problem or the displacement of human beings who undoubtedly have the greatest impact on native plant, fish and wildlife populations.

Trying to keep the environment in balance is no easy task, and I don’t envy the job of scientists and conservationists who are doing their best to work on these complex problems. As a mere resident with an interest in maintaining a healthy environment, I have to make my own decisions on how best to manage the land on which I live.

Despite suggestions otherwise, when it comes to the Cuban treefrog, I’m not yet ready to enter ‘capture and destroy’ mode. Alligators, opossums, raccoons, yellow rat snakes, barred owls and other birds of prey all eat Cuban treefrogs. For now, I’m leaving the control of this invasive exotic pest to its natural predators.