Sailing down my golden river...

I don’t like obituaries. Instead of waiting until after someone dies to sing their praises, I feel it’s important to tell people how much they mean while they’re still here to listen.

When Pete Seeger passed away last week January 27, my immediate reaction was overwhelming sadness. While the world had lost a musical icon, an emissary of peace and a voice of reason, I had lost a personal hero.

My eyes overflowed with tears on that Tuesday morning, as I read and listened to one online tribute after another. Despite my sorrow, I felt a wave of gratefulness: Seven years earlier, I had the chance to tell Seeger how much he meant to me.

In 2007, I wrote a column chronicling a close encounter with the famed folk legend at the Clearwater Festival in New York. Seeger initiated the festival, an annual event, almost 40 years earlier to raise public awareness about the (then) sorry state of the Hudson River.

Even though he was 88 years old at the time, Seeger and Toshi, his wife of 70 years who passed away in July 2013, attended the concert. Purely by chance, I sat next to them one day at lunch.

I included that essay in my first book, “Rowing Through TheMist: The Everyday Pleasures of Simply Living,” and sent a copy to Seeger at his home, a hand-built cabin, in the Hudson River Valley town of Beacon, NY. 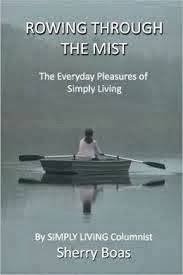 A few weeks later, a postcard arrived in the mail. On one side was a reproduction of the Syracuse Cultural Workers poster, “How To Build Global Community.” 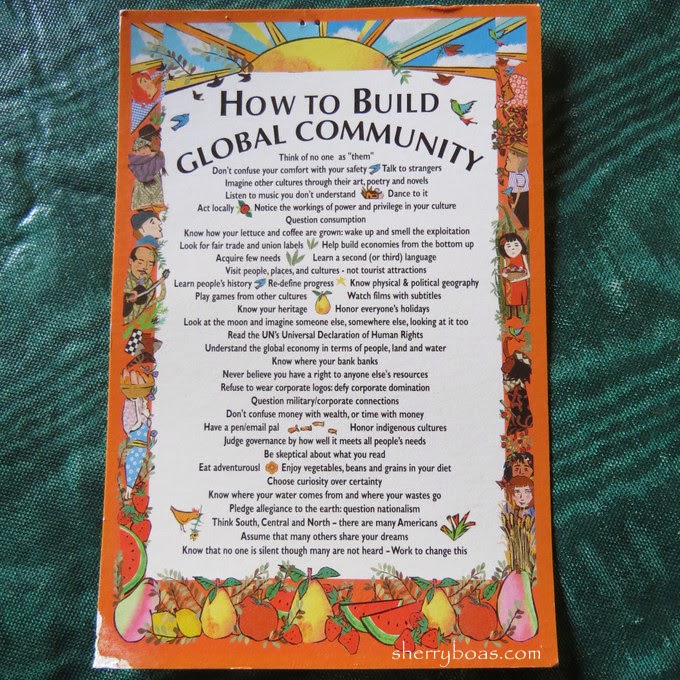 On the other was a hand-written message from Seeger — a brief ‘Thanks!’ for my gift above a considerably longer plea for me to encourage the newspaper to plug an upcoming United Nations Conference in Bali. Seeger said, “It may save the oceans from rising.” He signed the note “Love, Pete” and included his signature banjo drawing. I mounted the postcard on my wall and have treasured it ever since. 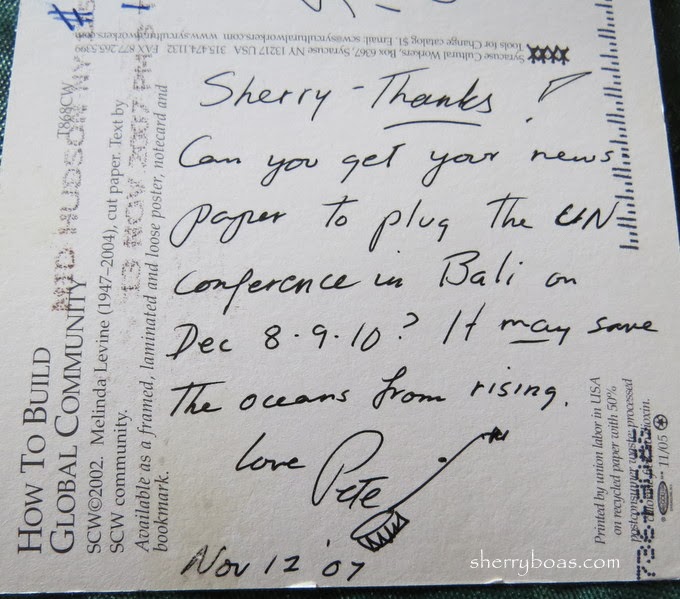 If we’re lucky, at some point in our life we each find a hero who inspires us and gives us hope. For me, Seeger was that person. Am I sad that he died? Incredibly so. But does his death mean I’ve lost him? Not at all. Perhaps more than most people, Seeger lives on in his music — 97 albums and five singles — his writing and in the stories other people have written about him. 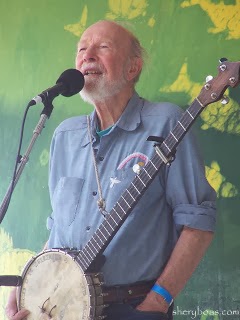 Perhaps the best words to sum up my feelings are Seeger’s own in a 2006 interview with Wendy Schuman for Beliefnet.com. When asked if he believed in an afterlife, Seeger replied, “Well, you might consider this: When Toshi and I had our first child who died when it was only six months old, I was in the army, my father wrote me and said, ‘I don’t think I could cheer you up in the usual way. But remember this, that something good that has happened can never be made to unhappen.’ That’s a nice way of putting it, don’t you think? Something that has happened can never be made to unhappen.”

Seeger's life was like that - something good that happened. If his life were a song, Seeger would have wanted us to sing along.