A flash of blue

I’ve seen so many bluebirds in the past few months that I no longer get excited when a flash of blue flies by.

Even though I often see lines of bluebirds sitting on telephone wires when I’m driving and notice them flitting from tree to field in yards that I pass, I still grab my camera and run outside whenever they deem our property worthy of a visit. 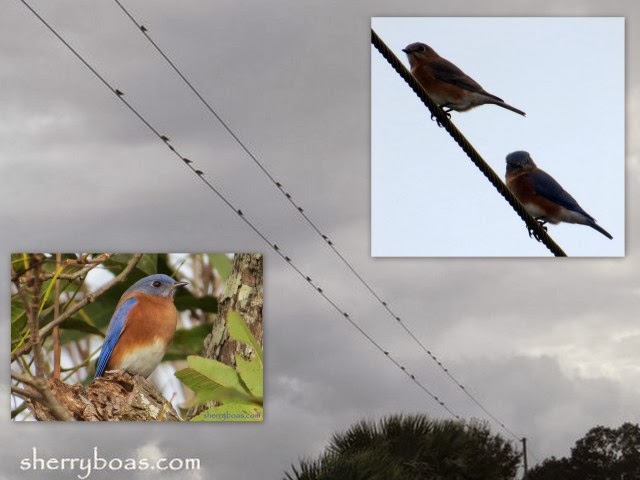 Before sitting down to write this column, I was taking yet more pictures of the sweet little songbirds sitting in our mulberry and fig trees. As I explained to Ralph, my not-quite-as-wildlife-obsessed husband, there are worse things to do than fill up the hard drive with images of avian beauty.

Bluebirds are members of the thrush family, which also includes robins and wood thrushes. There are three different species of bluebirds — Western, Mountain and Eastern – but only one, the Eastern bluebird, lives in Florida. Many Eastern bluebirds are year-round residents, but like so many other birds (and people), their numbers increase during winter when their northern relations migrate south.

Weighing about an ounce  — the same as 10 pennies — and measuring eight inches from head to tail, these compact bundles of blue, orange and grayish-white feathers are easy to spot, especially when perched on a fence post or flying from tree to ground in search of insects.

Both sexes share the same attractive colors, but the tones are duller on females and bolder on males, who also have bright blue heads compared to the females’ more subdued gray-feathered headdress.

As cavity-dwelling birds, Eastern bluebirds frequent open fields or meadows on the edge of woods, especially when the woods have dead trees suitable for nesting. Since our woods are now dotted with snags due to the demise of numerous slash and sand pines, I’m hoping some bluebirds will decide to move into one or more of the abandoned holes woodpeckers have drilled into the soft wood.

If the birds do decide to become more than fly-by visitors, I’m confident they’ll find plenty to eat. An Eastern bluebird’s diet consists mainly of grasshoppers, crickets, beetles, spiders, worms, millipedes, centipedes, sow bugs and katydids. As my garden-loving husband can attest, there is no shortage of those insects in our yard or his garden. We also have many trees bearing fruit and berries, which are also essential sources of bluebird food.

I’m delighted that the bluebird population in my part of Central Florida has become so numerous that I can now drive by a flock without needing to swerve suddenly onto the shoulder to observe and take photos. However, that doesn’t mean I’ve stopped looking for or caring about the welfare of these tiny packages of sunshine, sky and earth tones.

Like many of nature’s critters, bluebirds have it rough. Nestlings are subject to attack by house sparrows, house wrens and predators such as raccoons, cats and the American kestrel.

In recent years, much of the habitat they need to survive has been lost to development. While those threats seem obvious, another enemy isn’t. As anyone who has inadvertently stepped on a fire ant nest knows, the insects’ stings are extremely painful. Unfortunately, fire ants, introduced to Florida in the 1930s, can inflict even worse damage to bluebird nestlings, decimating an entire brood within hours.

All these challenges only make each sighting more precious. Literature has long depicted the bluebird as a symbol of happiness, good cheer, friendship, luck and hope. I couldn’t agree more. Bluebird sightings always bring a smile to my face.