A cool creature no matter what it's called

It's small, somewhat furtive and green. Sometimes it’s brown. It has a voracious appetite for insects and spiders but is completely harmless to people. It clings to walls and screens and sometimes finds its way into a house, but its real home is outside on trees and plants.

I call it a green anole but its proper name is Anolis carolinensis. As the only species of anole native to the United States, Anolis carolinenis is one-of-a-kind. However, it’s often misidentified as a chameleon, a brown lizard or a gecko. 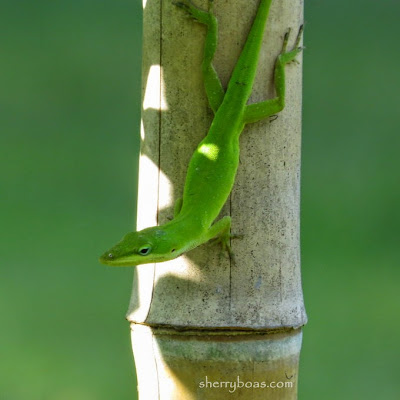 It’s easy to understand why. Because our native lizard changes color, people think it’s a chameleon.

It’s also confused with the invasive brown lizard from Cuba, Anolis sagrei, because both look similar, share the same territory and are active during daylight hours.

Finally, the anole-gecko mix-up probably stems from an insurance company’s highly effective advertising campaign to depict a Cockney-accented cartoon character as a gecko even though it strongly resembles our native green anole.

Despite what the anthropomorphic insurance mascot suggests, Anolis carolinensis is not a gecko. Geckos belong to the Gekkota family while green anoles are members of the Iguanidae family. Anoles are diurnal reptiles, active during daylight hours, but most geckos are nocturnal creatures who go about their business in the dark.

Unlike green anoles, whose eyelids can open and close, the eyelids of geckos are fused open and immobile. To keep them clean, geckos wash them frequently with their long tongues.

Another difference between geckos and anoles is the vocalizations geckos make. Green anoles are silent, but geckos emit a range of noises that sound like barks, chirps and even duck-like quacks.

Green anoles and brown anoles are often considered one and the same. They live and are active in the same places and look similar in body shape and size. One thing they don’t share, however, is skin patterns. Dark stripes, bars or spots mark the brown skin of Anolis sagrei and their backs — especially those of the males — often sport a raised ridge crest. None of these characteristics is present on the bodies of green anoles.

The confusion between green anoles and chameleons is due mainly to the ability of our native green anole to change color from green to brown.

However, true chameleons, which are native to Africa, Madagascar and parts of Asia, belong to a completely different family of lizards. While green anoles can change only from green to brown, a chameleon’s skin can exhibit a broad spectrum of rainbow colors.

The two types of reptiles also differ physically. Instead of having slender bodies, chameleon bodies are thick and stubby. They have short, tightly coiled tails and extremely long curled tongues that they use to catch prey. Another distinguishing characteristic is that chameleons have two large bulging eyes that can open and close independent of each other, something green anoles cannot do.

Despite all the confusion, Anolis carolinenis — the little green anole — remains a fixture in the Florida landscape. But it is not without challenges. In recent years, populations of our only native lizard have declined primarily because of the increase in brown anoles. Brown anoles have taken over green anole territories, and adult males occasionally prey upon green anoles. Pesticide use has contributed to population loss as well.

As far as I know, no geckos or chameleons live on our property near Groveland, but we have a healthy population of both green and brown anoles. They frequent our gardens, woods and fields. One little green lizard even lives in my rowboat and accompanies me when I go rowing.

It’s important to know your neighbors — even green ones that occasionally turn brown — but even more important is to care for the environment, so the insect-eating little green lizards of the world will continue to exist.