When a chickadee came to my birdfeeder the other day, I was ecstatic. I had been waiting a long time — 25 years — to see one on our property in Florida. 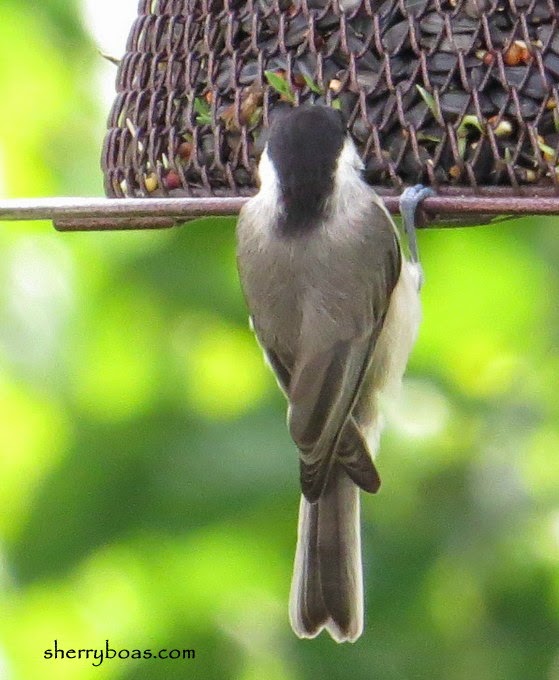 Of all the birds I love — and there are many — the humble chickadee holds a special spot in my heart. My fondness for this feathered flier goes back to my days on Cape Cod shortly after my husband and I began sharing our lives together.

In the early 1970s, we lived at an old farmhouse in Orleans, MA. Although the two-story wood-shingled structure had been in Ralph’s family for generations, we were the first in a long time to live there year round.

It was an easy life in those days. We worked just enough to pay for the few items we needed. We had few responsibilities and even fewer cares. Ralph focused his attention on tending and expanding the already lush gardens that dotted the property while I read one classical novel after another from the amazing literary collection that filled every nook and cranny — and there were many — in the wood-frame house.

One summer, after working my way through several Dickens and Henry James novels, I took a break from books to concentrate on birds. Several acres of woods surrounded the farmhouse. Birds constantly flitted from tree to tree. Although I knew little about birds when I first arrived on the Cape, my knowledge expanded day by day. Before long, I could distinguish different species by the way they looked, how they flew, the songs they sang and the type of nests they built. While my passion for observing nature didn’t exactly begin on those lazy summer days, the hours I spent walking through the oak and locust tree woods fanned the flames of my burgeoning flora and fauna fascination.

Of all the birds I saw during that period of my life, the one that I most enjoyed watching was the little black-capped chickadee. The chickadee is a chipper bird with an easily recognizable call and distinctive features. Its bold nature and fearlessness always impressed me. I admired its curiosity. Like the much larger Florida scrub jay, the little chickadee is not shy of people. The small songbird — tinier than a sparrow — will even land on the outstretched hand of a person offering seeds.

I wanted to be that person.

I spent hours that summer perched on a chair outside the farmhouse’s back door where I sat very still and quietly, my outstretched hand filled with sunflower seeds. I don’t recall how many days it took before I gained the birds’ trust but eventually, I did. At some point during that summer of my early 20’s, nature believed in me. Birds ate out of my hand and I was ecstatic.

Fast forward 40-plus years. Instead of living on Cape Cod, my home is in central Florida where my husband Ralph and I have worked hard to create a semi-tropical oasis that’s not only beautiful to look at but a haven for wildlife. For the most part, we’ve succeeded. Our once-barren land is now lush and green, and we share it with a wide range of critters. But until recently, chickadees hadn’t discovered us.

Two chickadees came to the birdfeeder that a pair of cardinals believes it owns. Instead of being black-capped chickadees like the ones I fed in Massachusetts, these southern songbirds are Carolina chickadees, a name given to them by John James Audubon during his time in South Carolina.

About an inch smaller and a tenth of an ounce lighter than their northern cousins, both species share similar traits and behaviors. They are cute, friendly and curious songbirds that will stop by a birdfeeder for a quick snack of sunflower seeds or suet in between regular meals of insects, spiders, berries or seeds. Chickadees are cavity-nesting birds that seek out mixed forests and open woods.

Maybe that’s why they are here. With the recent loss of many pine trees, our property is now peppered with snags — dead trees deliberately left standing to attract wildlife. Maybe we’ve finally created the habitat chickadees require.

Whatever the reason, they finally arrived, and I’m delighted they’re here. When I was still living on Cape Cod and feeding black-capped chickadees from my outstretched hand, I wrote a song about the cheery little visitors that gave me their trust. As I look out my kitchen window now and watch the southern version of that familiar bird steal a seed away from a possessive cardinal, one line of that long-ago song runs through my mind:

“Other birds have sweeter songs with fancy melodies, but my chickadee’s a friendly bird and that’s enough for me.” 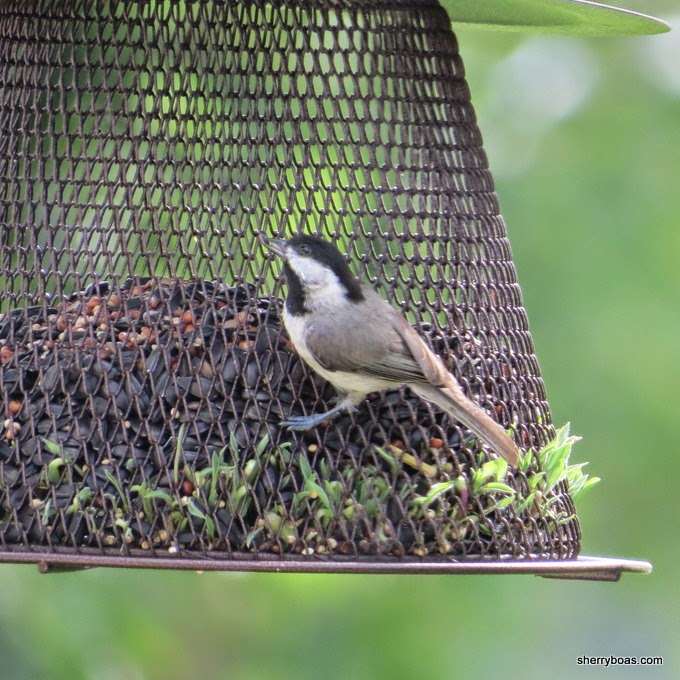