Saga of the sandhill crane family

I didn't have empty nest syndrome several years ago when the last of my four children left home, but recent events have made me wonder if I'm experiencing it now.

It all started when the pair of sandhill cranes nesting on our lake hatched two fluffy, wide-eyed chicks. 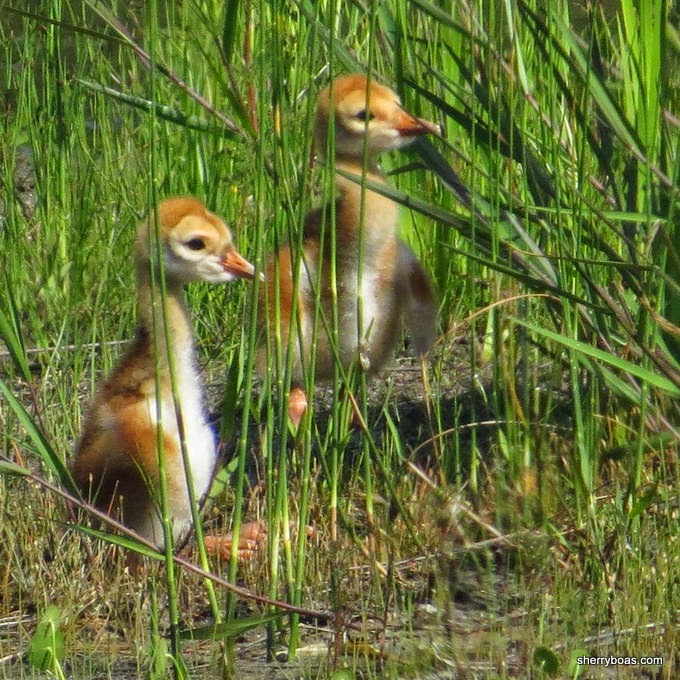 I had been eagerly anticipating the baby birds' arrival ever since April 16 when I observed the nest-building activities of the adult birds on a tiny spit of land in the shallow water at the north end of our lake.

For weeks, I'd wake up every morning and grab the binoculars to check on the cranes. I watched the patient mother-to-be sit on her minuscule island while the future father stood nearby. I marked the date on my calendar when nesting began and counted 32 days ahead — the incubation time for sandhill crane eggs — to predict the anticipated day of arrival. 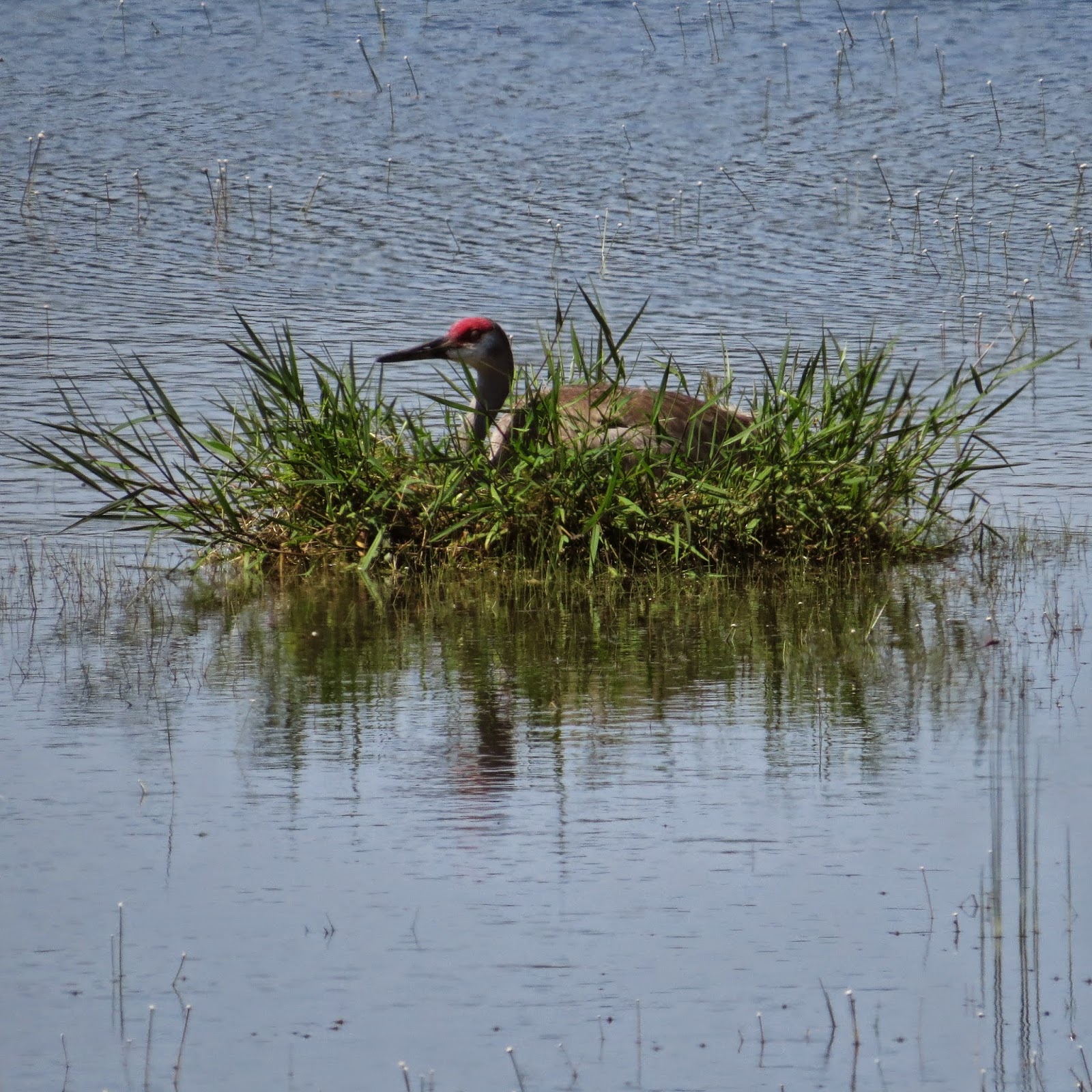 My estimates were only off by two days. On May19, my morning binocular scan yielded a tiny object moving on the island. 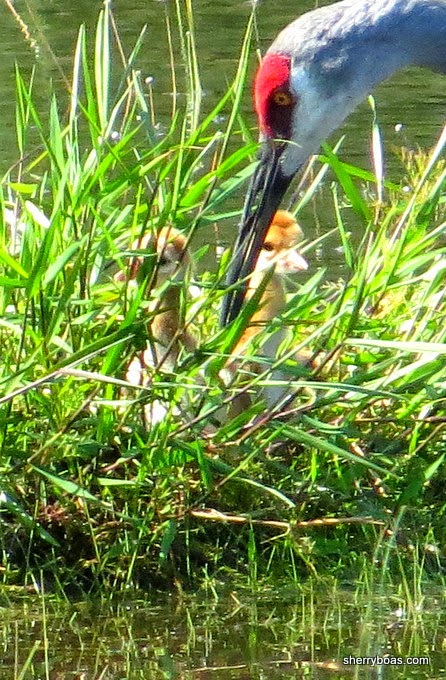 Grabbing my camera so I could zoom in closer, I saw not one but two baby cranes tagging alongside both parents as the adult birds poked long bills into the shallow water.

Incredibly excited, I mounted a daily watch. Although eager to see as much as possible, I refrained from getting too close.

Rather than make the birds uneasy, I photographed from afar, relying on a powerful zoom to catch the details of the baby cranes' young lives.

Everything was going well on Days 1, 2 and 3. Each morning the crane family would awaken with a series of stretches before venturing out to explore the lake. 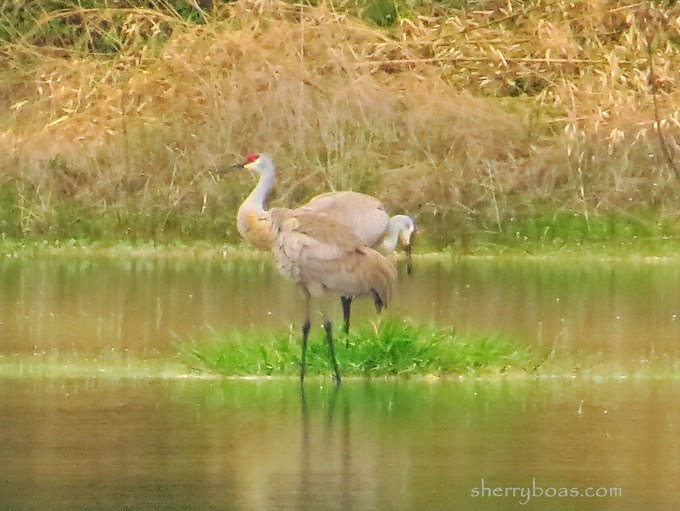 For the first couple of days, the foursome didn't roam far, but by Day 3, they had already covered a considerable distance. By then, the two chicks were beginning to master walking and had learned to grab the food their parents tossed their way.

However, around that time, it also became evident that one chick — presumably, the first to hatch — was notably stronger. It walked faster, stood longer and managed to eat more food than its sibling. The more I watched, the more I began to worry. Would the two babies survive or, as so often happens with sandhill crane chicks, would only one of them live?

By Day 4, both baby birds had managed to follow their parents along the shoreline from one end of our 12-acre lake to the other. Seeing how far both chicks were able to go boosted my spirits. Perhaps my suspicions were wrong about the weaker one. Maybe it just needed time to gain strength and stamina. 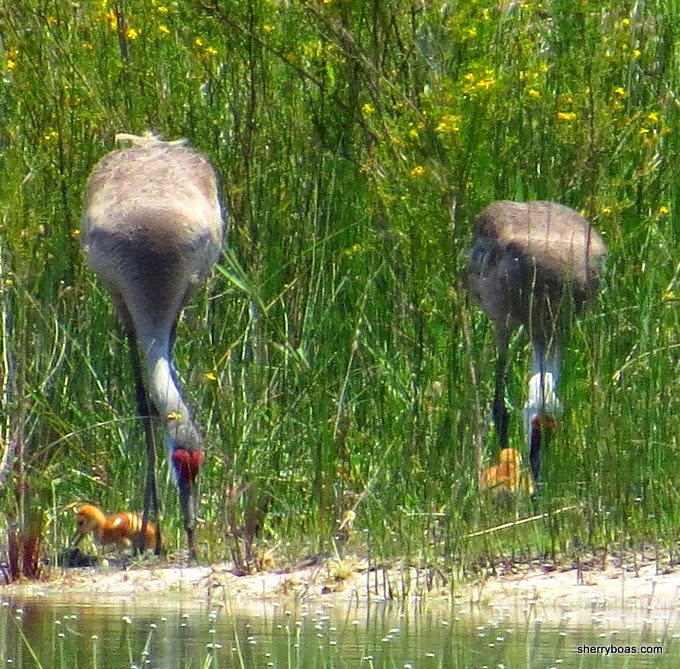 When I awoke on Day 5 and looked out the window a thick mist was rising off the water. Although it was still very early, the crane family was already halfway around the lake's perimeter. Before going into the kitchen to make breakfast, I snapped off a couple quick shots assuming I take more pictures later. 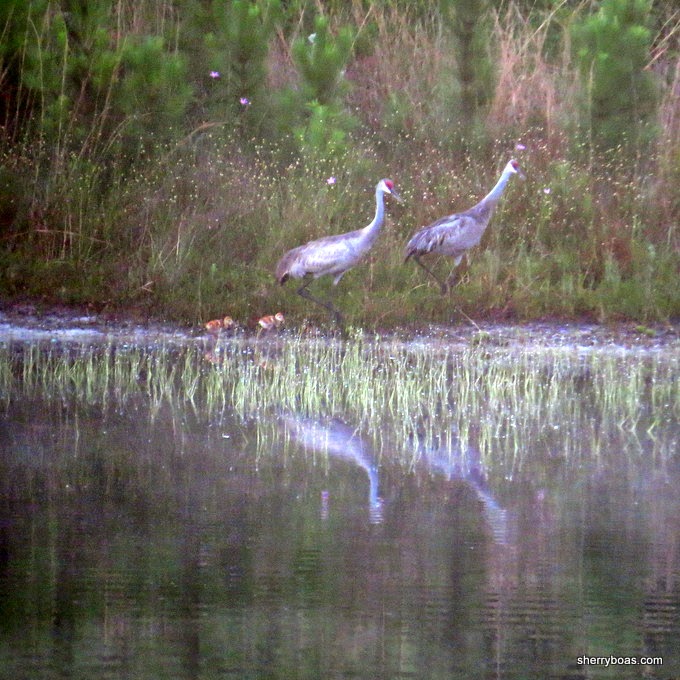 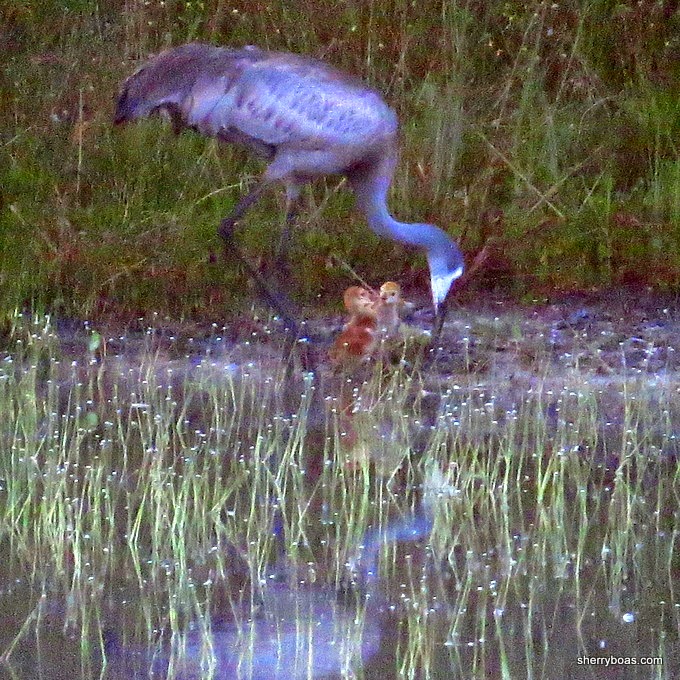 I never did. That was the last time I saw them on our lake.

Somehow, the sandhill crane family left our fenced and bamboo-hedged property for another location, though how they managed to navigate obstacles with young chicks that could not yet fly remains a mystery.


My guess is that they walked to our neighbor's abutting acreage, vacant pasture crisscrossed by a series of narrow canals. With grain bins for the cattle and dry upland to explore, I can understand its appeal.

Nonetheless, I missed them. I felt lonely, distraught and abandoned.

Later that day I drove along my neighbor's fence line to see if I could find the birds. Although I saw a pair of adult cranes, I didn't see any babies. A few days later Ralph and I climbed the fence to search farther in. We came up empty.


From that point on, I tried to stop looking. Then, on the last day of May, while taking the back road home from town, I stopped along my neighbor's fence line. There, foraging in the tall grass beneath an abandoned pecan orchard, was the sandhill crane family. Only it was a family of three. 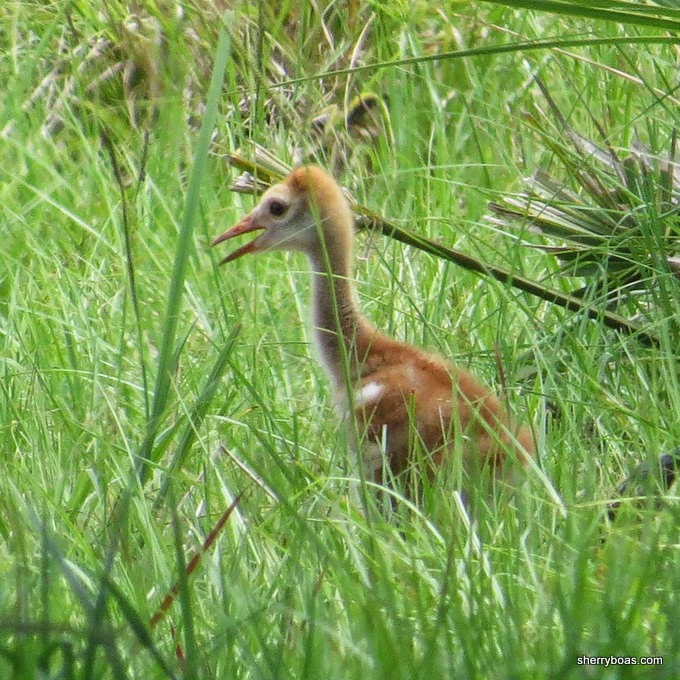 How can I be certain they are the same birds that nested on our lake? I suppose I can't. However, logic, previous experience and gut feelings suggest they are indeed "my" birds. The remaining baby chick looks healthy and strong. The parents continue to stay close to teach, protect and show their sole offspring how to survive in a difficult world.


Experts say symptoms of empty nest syndrome include a sense of loss of purpose, feelings of rejection, worry, stress and anxiety. I can relate to those feelings, but not about children — I didn't worry when they left home. I didn't feel lost or rejected. But with birds — sandhill cranes in particular — I do. Maybe that's why it's called "empty nest" syndrome.
Posted by sherry boas at 7:04 AM