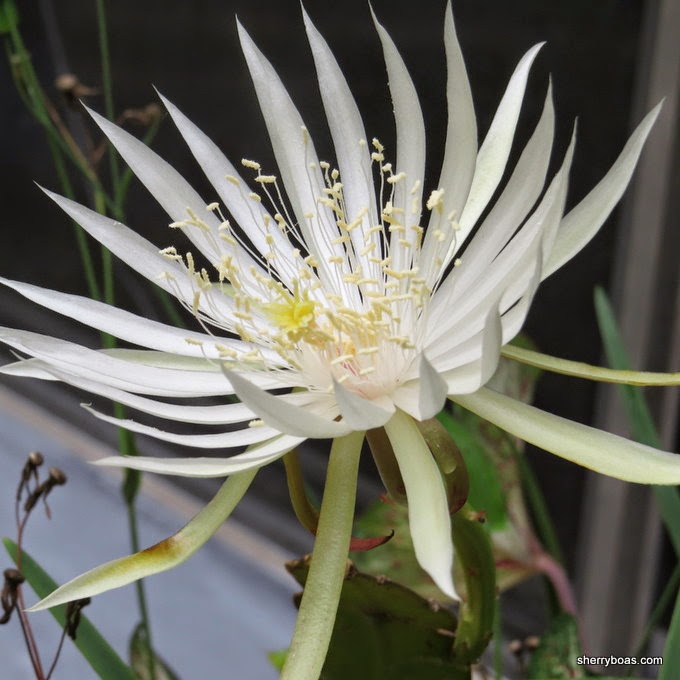 According to Wikipedia, Selenicereus grandiflorus is a cactus species originating from the Antilles, Mexico and Central America commonly referred to as Nightblooming Cereus, Queen of the Night, Large-Flowered Cactus, Sweet-Scented Cactus or Vanilla Cactus.

According to me, it's simply a 'cereusly' grand surprise.

I received my Night-blooming Cereus two years ago as one of many plants offered at a Garden Web plant swap in Winter Garden.  I knew what it was because my daughter, Jenny, has a lovely cereus growing in a container at her home in Florence, MA.  I took the plant because I liked the idea of having one too.

However, I'm ashamed to say, I was not a good caretaker.  After I took the cutting home from the plant swap I basically ignored it.  I gave it no attention at all.  For two entire years!

When I say I ignored it, that means I didn't even plant the foot-long snippet I was given.  Instead, I let it lay around in an empty landscape pot in a corner of the garden.  If it rained, it got wet.  If it didn't rain, the cutting sat there without added water.  Occasionally I'd pass by and notice that it was still alive.  Remarkably, the long, flat leaves remained green with stringy roots that seemed to grow longer over time.

About a week ago, I passed it again and noticed something different.  A stem had emerged near the end of one leaf that bore all the markings of a future flower.  Suddenly, I was inspired. Sort of.

I took the cutting out of the landscape pot and stood it upright inside an existing planter that contained an unruly ice plant, a caladium and some red tasselweeds.  I didn't actually dig it into the soil.  I merely (lazily) positioning it in such a way that its future bloom would be visible from inside my bedroom window.

Two days later, I woke up at 6 A.M. to a cereus surprise:

Now that the blooming is over, I will have to wait another year for a repeat performance.  That's fine with me.  I ignored the epiphyte for two years and it still rewarded me with a solitary bloom.  Plants don't get more generous than that!

(BTW, I'll soon be transferring it to its own container with real soil and everything.  After two years of being ignored, I think it deserves a little attention.)