Is Bear hunting in Florida a good idea?

In the 23 years I’ve lived in south Lake County, I’ve seen a black bear only once.

It happened two years ago when my husband Ralph and I were walking down the driveway to get the mail. The bear, which was eating acorns under a large oak, ran into the woods as soon as it realized people were near. I had my camera with me and managed to capture one picture before the bear vanished into the forest. 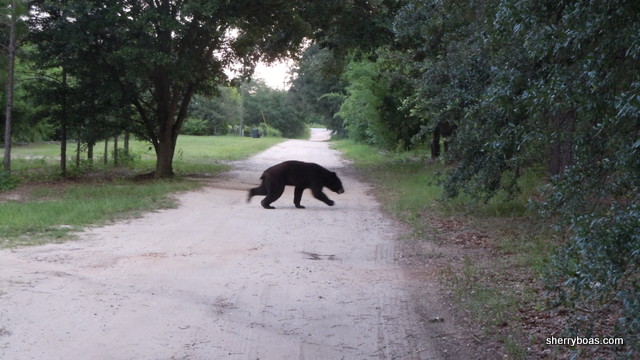 Ralph and I were probably the last people to see that bear alive. Later that night, a car on a nearby road killed a black bear.

More than 1,000 bears have been killed on Florida roads since 2009, according to David Telesco, bear management coordinator for the Florida Fish and Wildlife Conservation Commission. That’s a huge toll on a population estimated a decade ago at 3,000 animals, though now believed to be considerably higher.

Bears in Florida don’t have it easy. In addition to being victims of highway collisions, black bears also must contend with a shrinking habitat. A single bear ranges over 25,000 acres, yet every year more and more of the land it needs to survive is converted to residential and commercial development.

With such difficult challenges, at least Florida black bears don’t also have to contend with the additional burden of being hunted — but they might soon.

Although hunting bears has been prohibited in Florida since 1994, the ban could be lifted in light of several recent bear attacks on people. The commission is holding a hearing beginning at 8:30 a.m. on Wednesday Feb. 4 at the Hyatt Regency, 225 E. Coastline Drive, Jacksonville, to determine whether to lift the 20-year bear hunting ban. A decision will not be made until at least June.


Click here to read the complete FWC Bear Management Update to be presented at the meeting on Feb. 4.

With 19.55 million residents in the Sunshine State and only 3,000 black bears, it would seem the two species should manage to get along. And most of the time, they do.

In the last nine years, there have been only 18 documented bear attacks on people. While none of those attacks resulted in fatalities to the humans, the bears weren’t as lucky. In 2014 alone, the wildlife commission euthanized 30 bears because of nuisance behavior, according to bear biologist Sarah Barrett.

When bears do misbehave, it usually is due to human stupidity. Nearly half of the 18 bear attacks in the past nine years took place when people were trying to hand-feed bears or were hitting them with sticks.

People need to learn how to coexist with wildlife. Bowls of pet food left outside, greasy barbecue grills, open garage doors and even birdfeeders all act as calling cards to hungry bears in search of an easy meal.

Instead of reestablishing bear hunting, people living in areas frequented by bears should be required to use only bear-proof garbage cans and be educated in ways to prevent bears from coming to homes in search of food.

It is so typical of humans to move into land where wildlife once lived, then condemn the very critters whose land they have taken away. A wild animal is not doing anything wrong when it comes looking for food.

Conservationists consider the Florida black bear a success story. In the 1970s, the bear population hit an all-time low of 300. Thanks to a ban on hunting and protection provided by being included on the state list of threatened species, bear populations have made a resounding comeback. However, protection was lifted in 2012 when the black bear was removed from list, and now hunting is once again under consideration.

If you feel as I do that hunting bears is not the answer to Florida’s nuisance bear problem, there is something you can do. You can sign an online letter by Environmental Action at Stunt The Hunt to let the wildlife commission know you don’t want to see the hunting ban lifted.

But act soon. The letter is being presented to the commission at the Wednesday hearing. There’s “bearly” enough time. 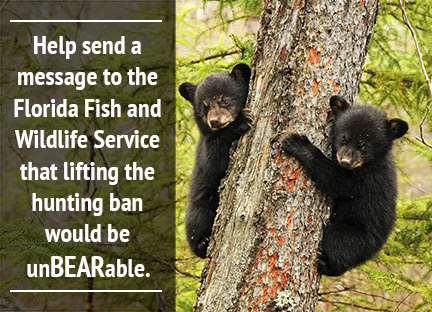