We are in the process of replacing our house’s 22-year-old wall-to-wall carpeting with flooring less likely to trigger allergies.

It’s a big project, so we’re doing it in stages. We began with a room on the south side of the house that used to be my office. After removing the carpet and tiling the floor, we moved our bed there. It’s a small room, but that’s what we were after. We wanted an uncluttered space that we could easily keep free of dust and allergens. So far, the experiment is working. I’m sleeping better, sneezing less and waking up with eyes that are no longer watery.

I had hoped sleeping in a carpet-free room would help my sinuses, but I didn’t anticipate another positive change brought about by our recent room rearrangement: The view from my new bedroom is spectacular. Just outside the large picture window is a mature bottlebrush tree (Callistemon citrinus) that draws wildlife like a magnet. Birds, butterflies, lizards, bees and wasps are constantly coming and going in and out of the tree’s flower-bedecked branches. 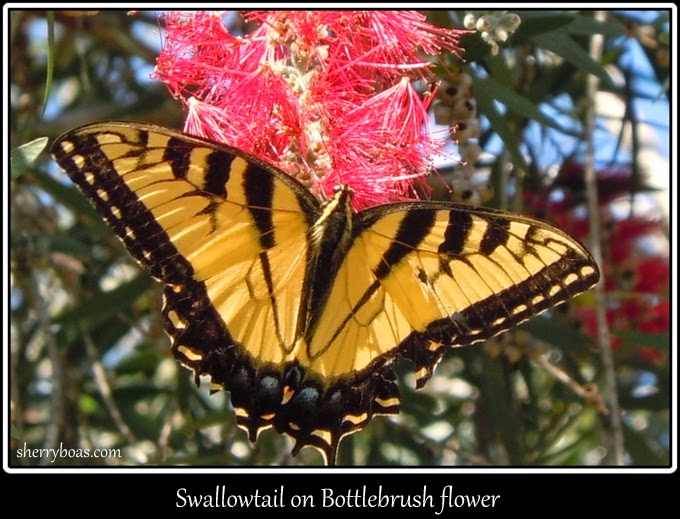 The first thing I usually hear when I wake up in the morning is the sound of a male Carolina wren. The wren, a small bird with a loud voice that belies its diminutive size, likes to sit on the uppermost branches of the bottlebrush tree and welcome the day with his trilling tune. Although his song rouses me, rather than getting up quickly, I find myself staying in bed longer to see what other treats the tree will provide.

Lately, I’ve spotted yellow-rumped warblers landing on the red, bristly blooms. I’ve yet to learn whether these pretty birds are there to enjoy a sip of the sweet nectar or to eat tiny bugs caught in the sticky substance. It could be they’re after both. 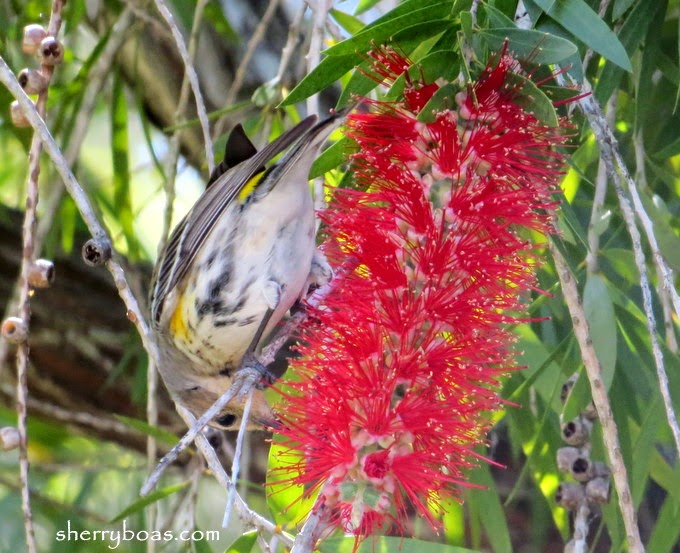 Cardinals also are drawn to the tree, although they don’t frequent it as often as the warblers do. When they do come, I usually see both male and female cardinals feeding together. If I didn’t see them fly in, I’d probably miss them entirely. The male cardinal’s coloring is exactly the same shade of red as the bottlebrush blooms, and the bristles are about the same length as a cardinal’s body. I wonder why cardinals don’t spend more time in the bottlebrush tree since it provides such excellent camouflage.

In past years, I’ve seen hummingbirds hover over the blooms, but I’ve yet to see one arrive on the tree outside my new bedroom’s window. Hummingbirds like bottlebrush trees since they are such a rich source of nectar. One of these mornings, I’m sure one will appear.

I may not have seen hummers yet, but I sure have seen bees. Yesterday, the tree was abuzz with pollen-gathering insects. We’ve all heard about bee colony collapse and the shortage of honeybees worldwide but in our yard, especially around the bottlebrush tree, bees are working overtime. Along with them, various wasps zoom in and out of the tree. Like bees, wasps also are pollinators, but because they lack a bee’s fuzzy hair, they aren’t as efficient at gathering pollen.

One recent afternoon, I watched a male green anole try to attract a female from his perch on one of the tree’s thin branches. The native lizard bobbed up and down displaying his bright pink dewlap. However, I don’t think he was rewarded since I didn’t see any females approach. Instead of trying to attract a mate, the anole might have been marking his territory or trying to intimidate another lizard. Regardless of whether his efforts worked on other anoles, he succeeded in attracting my attention, putting on a show I was happy to have witnessed.

Butterflies tend to flutter about the bottlebrush tree a little later in the season when the weather is warmer, but the other day as I was still lazing about in bed, I noticed a beautiful blue-colored butterfly land on one of the uppermost blooms. Few things motivate me to move faster than a wildlife sighting. As soon as I saw the butterfly, I jumped out of bed, grabbed my camera and ran outside. Since moving into the new bedroom, I’d gotten into the habit of keeping my camera in the room with me. I took several pictures that morning and later identified the flutterer as Limenitis arthemis astyanax, commonly known by the descriptive name, red-spotted purple butterfly.

When we decided to enter into a renovation project to free our home of allergens, I had no idea our efforts would result in such unexpected bounty. Not only can I now breathe easier, I also enjoy an endless array of wildlife sightings from the comfort and sneeze-free zone of my tiny new bedroom.

Bottlebrush trees bloom from spring through summer. I’ve seen so much already in just a few short weeks from my new view. I can’t wait to see what the next few months will reveal.
Posted by sherry boas at 6:28 AM