Mulberry versus waxwing theory put to the test

My husband Ralph has a theory: If we plant enough mulberry trees, at some point there will be more mulberries than the birds can eat.

I didn’t think it would work.

The birds are cedar waxwings, feathered bandits that fly in annually to strip our white and black mulberry trees of fruit a day before they’re ready to pick. It's uncanny how they know exactly when to arrive until you realize how waxwings work.

A select group of birds takes on the role of scout. About a dozen or so scouts then fly by potential feeding sites ahead of time to check on their status. After surveying the situation, the scouts report back to the flock — how they do it is an avian mystery — so their hungry friends will know exactly when to time their arrival.

When the berries are just about ready to pick — about two weeks after the scouts’ check-in — a large contingent of ravenous birds descends on the source. Suddenly, a quiet afternoon is shattered by the unrelenting high-pitched chatter of several hundred flying mouths intent upon devouring each almost-ripe berry dangling from the limbs of heavily-laden mulberry trees.

And this year, our trees were more heavily laden than ever.

We’ve been growing white and black mulberries — and battling waxwings — for a long time. We planted our first four trees shortly after we built our home, positioning them about 30 feet away for easy access during picking season. Mulberry trees grow big. After 20-plus years, the original four are now about 35-feet tall with canopies equally as broad. From those “starters,” Ralph propagated cuttings to form new trees that he planted in different places around our acreage. Some of the trees produce black-colored berries while others yield slightly sweeter white fruit. We like the flavor of both. Apparently, cedar waxwings do too.

Cedar waxwings are highly social birds. Weighing in at just over an ounce with a 12-inch wingspan, these medium-sized, black-masked, crested beauties have tawny colored feathers on their backs and pale yellow bellies. The end of each tail feather looks as though it was dipped in yellow paint and there’s a dot of what resembles red wax on the outer tip of each secondary wing feather. 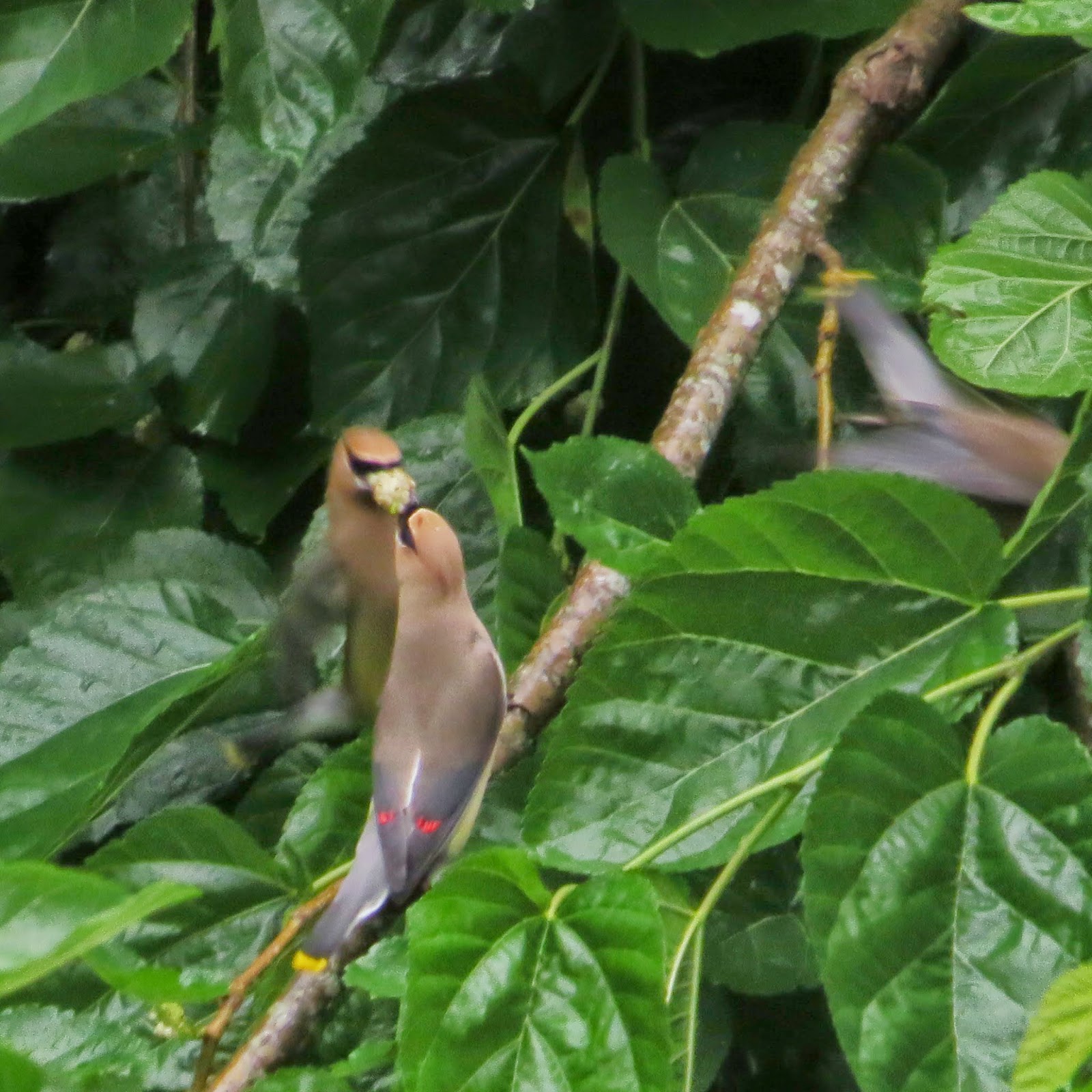 I enjoy seeing waxwings because they are so beautiful and so interesting to watch. I really don’t mind if they eat our mulberries. I just wish they’d leave us a few. We planted the trees hoping they’d attract birds and supply us with fruit. We’ve succeeded on the first, not so much on the second.

Ralph began implementing his plant-more-mulberry-trees theory several years ago. He positioned mulberry trees all around our property thinking the waxwings would focus on some of the other trees instead of the ones by our house. He was right about the waxwings finding the other trees because the flock arrived in time to devour their berries just as they were about to ripen. The scouts must have added them to their mental map. Unfortunately, the feeding frenzy wasn’t limited to remote plantings. Waxwings descended on the trees near our house as well.

This year, the flock arrived on March 29th. Three weeks later, they are still here although not as often as they were in the beginning. Mulberries aren’t the only food cedar waxwings eat. Their diet includes all sorts of fruit, berries, seeds, small cones and insects. Occasionally, they even feed on the sap of trees. I’m sure the scouts are working hard to inform their companions of the latest, freshest treats available.


What does that mean for us? It means Ralph was right. While the waxwings have been off tormenting other growers, we picked buckets of black and white fruit. I thought planting more mulberry trees would increase the number of waxwings instead of solving our problem. I don’t like being wrong, but in this case, I’m glad I was.