A little bird told me … wake up! 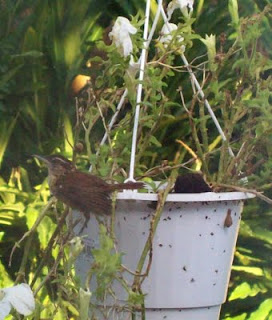 For several weeks I've awakened to the songs and chatterings of these buff-colored birds with the distinctive white stripe above their beady black eyes.

"Do you know what's making that noise?" I asked Ralph one morning while we were still in bed.

"A frog?" he suggested, "or some kind of cricket?"

"Nope," I said as I slipped out from under the covers and walked to the porch. "It's a bird — a tiny bird with a loud mouth."

Sure enough, I spotted a female wren hopping from the lower limbs of a crape myrtle to the protective cover provided by a bed of yellow-flowered wedelia.

Although it weighs less than nine dimes, a Carolina wren is a powerhouse of activity. From dawn till dusk, these adaptable dwellers of farms, fields and gardens scour the ground and lower limbs of bushes and trees in search of the foods they like best — insects, spiders and the occasional berry.

From years of observing these charming chirpers, I've concluded that they rarely partake in any activity without a good deal of vocalization. What I didn't realize is that while females chatter, only the male birds sing. Males fill the air with a steady stream of high-pitched, whistled melodies while their female counterparts engage in a series of repetitive mutterings.

Scientists who have studied captive Carolina wrens have documented as many as 3,000 different songs by a single male in a day. With such a strong desire for self-expression, it's no wonder I find myself roused in the early morning by a bird-song serenade.

Carolina wrens are terrestrial creatures that tend to use their wings more for assistance when hopping over large objects than for actual flying. When they are not busy building their beautifully woven cavelike nests, these mate-for-life birds expend considerable energy defending their territory and warning each other of potential dangers.

In addition to the ever-present threat posed by domestic cats, predators of the adult birds include blue jays, hawks and owls. Because the parents prefer nesting sites less than 10 feet off the ground, the oval-shaped eggs are particularly vulnerable. Squirrels, raccoons, snakes and fox all feed on the cream-colored, brown spotted ova.

Although Carolina wrens are notorious for their loud songs and persistent chattering, they are also famous for their unusual nests. No abandoned article of clothing or footwear is safe from these clever weavers of twigs, weeds and found materials. Carolina wrens are just as likely to build their nests in a forgotten pair of boots, the pocket of an old shirt or an upturned garden hat as they are to use natural settings such as an old stump or a tangle of vines. I've discovered their handiwork on a shelf in our garage, inside a flowerpot filled with rain lilies and in the hollow belly of an old mailbox.

Lately I've been wondering if nest building is on the mind of the bird that has been waking me each morning from my slumber. There is a definite pattern to its beseeching cries. The sounds begin about the same time each day, come from the same part of the yard and are intoned with the same sense of insistence and urgency. If I wasn't still so tired during this daily deluge of avian verbosity, I might follow the bird and figure out what it is doing.

Most mornings, however, I'm too sleepy for all that. It's all I can manage to pull the covers over my head, nestle into the pillow and strive to re-enter a dreamlike state. Unfortunately, that tactic is rarely successful. Although I admire the little chirpers that inhabit my yard, their admonishments for my sluggish behavior inevitably drift into my sleep-muffled head.

Who needs an alarm clock when you have a back yard filled with birds?