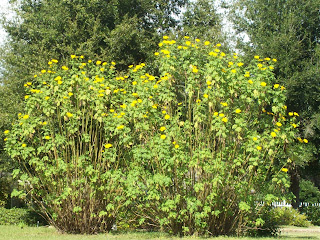 My Mexican sunflowers are finally blooming. It sure took them long enough. Tithonia diversifolia must be one of the pokiest plants around. Although the buds started swelling a few weeks ago, the large, daisy-like blossoms only began appearing at the end of October. Drive through any neighborhood and you’re bound to notice a few of the tall, bushy plants peeking over fences and along property lines. The flowers, when they finally open, look like giant golden daisies. The bushes often tops out around 15-feet, tall enough to tower over hibiscus, oleanders and other ornamental shrubs.

I like Mexican sunflowers because the flowers are so cheery and because they attract a number of butterflies and bees. What I don’t like about them is how difficult they are to properly place in the landscape. I’d probably feel differently if tithonia bloomed for a longer time or looked more attractive when it wasn’t flowering. It would also help if the cold didn’t kill it back every year reducing the bush to an unruly skeleton of gawky stalks. Until the buds turn into flowers, tithonia is an ugly plant. It’s tall and leggy with rough, hairy stems and broad, unattractive leaves. In its pre-bloom state – which is most of the year - it looks more like a huge weed than an ornamental perennial. In some ways, that’s exactly what it is.

I planted my first Mexican sunflower near the house but Ralph was never happy with that location.

“Can’t you move it somewhere else?” he repeatedly asked. “How about someplace where it can sprawl without being in the way of the mower?”

My practical husband had a point. The tall stalks have a tendency to lean over, touch the ground and re-root. That’s a fine attribute for small plants but not such a positive trait when you’re talking about a 12- to 15-foot tall shrub that grows equally as broad.

Our son, Timmy, took Ralph’s suggestion to heart and relocated several tithonias to a spot alongside his vegetable garden. Unfortunately, Timmy then moved away, leaving the plants (and his abandoned vegetable garden) for us to tend.

“They’re still in the way,” Ralph remarked one day when the mower was attempting to whack that area back into a semblance of order.

I’d like to relocate the existing plants to a place on the property where they can sprawl as much as they want. In my ideal world, that spot would be within sight of my front porch so I can look out the windows and enjoy the massive clusters of golden blooms but it wouldn’t be in the forefront. I don’t want to look out and see the plant most of the year when it is not flowering and I especially don’t want it to be front and center after the first frost when whatever blooms remain have withered up and fallen off.

“How about planting it across the lake,” I suggested the other day. “That way, I could look out the windows and still see it but it won’t be in the way of the mower.”

I hope we get to it this winter. After years of growing Mexican sunflowers in the wrong place, it would be nice to finally get it right.