A sweet journey back in time 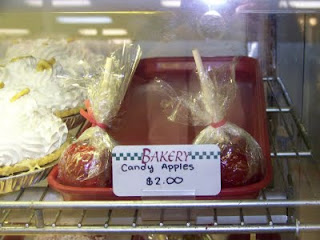 I just finished eating a candy apple. October is my birthday month, and indulging in treats that I usually don't eat is one of my birthday traditions. This year, not only did I enjoy eating a bright red candy apple, I traveled to Pennsylvania to get it. Another birthday gift to myself was a return to my hometown, coinciding with my 40-year high school reunion. For my 58th birthday, I traveled back in time to my youth, revisiting old friends, driving down winding country roads and stopping by some of the businesses I frequented in my childhood.

My friend Megan picked me up at the airport, and we used the 45-minute drive from Philadelphia to Yardley to fill in the gaps since we last saw each other 23 years ago. After driving past both of our childhood homes, we stopped at Cramer Bakery, where I was hoping to find the pecan crescent cookies I was so fond of as a child. Unfortunately, the bakery — which looked amazingly the same as it did in 1969 — had sold out of those particular cookies. That's probably just as well. One lesson I learned from my birthday trip is that edible remembrances of times gone by are often sweeter than the treats themselves.

Megan drove me to the home of Mary Ann, another classmate I had known since kindergarten. Because Megan had opted out of attending the reunion, my plans were to stay at Mary Ann's house for the weekend and go with her to the reunion activities. Mary Ann and her husband, Harry, live in the small town of Wycombe in a historic home that they have lovingly restored. Even though we hadn't seen each other for four decades, meeting Mary Ann had none of the awkwardness one would expect after so much time. Despite the years, our interests and lifestyle choices were remarkably similar. We caught up with each other quickly and felt immediately at ease.

Mary Ann and I attended several pre-reunion gatherings with former classmates. A few of us met one morning at Styer Orchard, where I bought the candy apple. Like Cramer's, Styer's was around when I was a child, and memories of going there in autumn for pumpkin pies and candy apples flavored my youth. Another old familiar haunt was Goodnoe Farm Dairy Bar, an ice cream parlor where I worked as a teen. Although I rarely eat ice cream anymore, for old time's sake I ordered a sugar cone topped with a generous scoop of cherry vanilla ice cream.

All of our outings weren't about food. About a dozen classmates gathered at Bowman's Tower, a 125-foot-tall stone tower near Washington's Crossing that we used to frequent. Although we obeyed the rules and rode the elevator to the top (an elevator that wasn't there during our high school years), some of us opted to take the stairs back down even though a sign told us the stairway was off limits. We were, after all, the class of '69 — once a rebel, always a rebel. Another outing was to the artistic community of New Hope along the Delaware River, where we listened to the Sonic Falcons, a band made up of former classmates. Even though people there were friendly and the music was fun, I felt out of the loop at that gathering. The venue was loud and smoky, two qualities for which my 58-year-old body has minimal tolerance.

The reunion dinner itself was anti-climactic, in part because the chief organizer of the weekend events, a classmate named Sharon, fell ill at the last minute and couldn't attend.

My birthday trip to Lower Bucks County provided no shortage of treats. I saw about a dozen deer and hundreds of geese. The leaves on the trees were in full autumnal splendor, something I haven't seen in such richness and intensity for many years. As we drove along picturesque roads, we passed beautiful stone farmhouses surrounded by harvested cornfields. Yes, I ate a candy apple, but far sweeter and longer-lasting than any of my edible treats were the friendships I rekindled. Getting to reconnect with Megan, Mary Ann, Sharon, Tom, Ron, Suzanne, Coreen, Bev, Betsy and so many others was far more special than any taste of artificial sweetness.

They say you can't go back in time, but this year, for my birthday, that's exactly what I did.