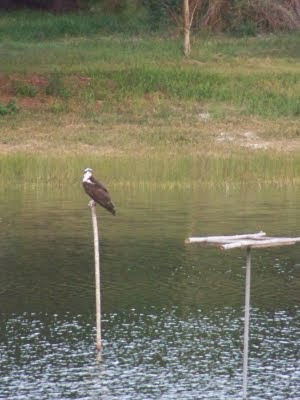 Seasonal indicators abound. Over the past few weeks, the goldenrain tree has burst into bloom, showering the sky with color. The deciduous tree's gold-to-coral display is one of my favorite signs that a seasonal shift is under way. Summer is on the wane. Autumn has arrived.

On the ground, stiff brown sycamore leaves have begun to gather beneath increasingly bare branches while a noticeably cooler breeze blows across the feathery faces of goldenrod plumes. Whatever bright-orange persimmons the raccoons missed now dangle from leafless branches. On loquat trees, fragrant white blossoms have emerged, promising a hefty harvest in February. And the other day, for the first time in several months, I actually had difficulty submerging myself in the lake.

"Gosh, the water has gotten cooler," I said to Ralph as we headed into the lake after being outside for a while. "I haven't had this much trouble getting in since last April."

All summer long, dipping into the silky smooth water has been as easy to do as snuggling under the covers. The lake has been a delightful escape from the intense summer heat, but now that the air temperature has dropped, the lake has cooled correspondingly. I did manage to ease my way in yesterday, but I did so with more reluctance than I'd felt in months.

I'm not complaining. The loss of one pleasure is just an opportunity for another to take its place, and my most recent delight has come from observing an osprey that I hadn't seen all summer.

I first noticed the large fish hawk on our lake last November. Throughout the fall and winter and into the spring, the white-bellied raptor perched on a bamboo pole sticking out of a submerged peat island in the middle of our lake. Every morning when I woke up, I saw the bird sitting there and, although it left during the day, it returned at dusk to spend the night on its precarious perch. The osprey became such a fixture that after a while I stopped paying attention to it. I suppose I took its presence for granted. Maybe that's why we were well into summer when I realized it was no longer there.

The summer of 2009 was so full of weddings, new babies and writing projects that I didn't have time for prolonged pondering about the osprey's whereabouts. Occasionally I wondered why it had gone away, where it went and when it would come back. I missed watching the broad-winged bird circle the lake, dive to catch fish, then devour its catch while balancing on the bamboo perch. I even missed hearing its piercing cry — the osprey's warning when I approached too close.

The day I realized it had come back was the first cool day in October. Before then, it had not occurred to me that seasonal changes had anything to do with the osprey's whereabouts. Because I was used to seeing ospreys year-round, it didn't dawn on me that some fish hawks are migratory, traveling thousands of miles annually to return to good fishing grounds.

I have no doubt that the bird that recently returned to our lake is the same osprey that was here last November. Ospreys are creatures of habit, and once a bird has claimed a suitable habitat as its own, it comes back every year.

I don't know where the osprey in my lake spent its summer, but I do know that its return is yet another indication that the seasons have changed. Autumn in Florida is a wonderful time of year, and having a resident osprey to observe only makes it better.