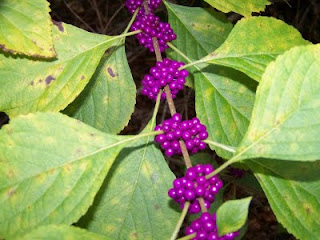 Beautyberry earns its name in autumn. As a small deciduous shrub, Callicarpa americana is a blaze of brightness in an October woods. The fruit is the plant's most striking feature. Clusters of tiny berries the color of passion — a pulsating pinkish-purple — cling to leaf axils like beads on a necklace. In verdant woods, where greens predominate, catching sight of a beautyberry bush is like chancing upon an unexpected gemstone — its color dazzles.

Eighteen years ago, the property we live on had none of the attributes beautyberry requires. As an understory plant, Callicarpa americana likes a semi-shaded location where accumulated plant litter has turned the natural sandy or clay soil into a lightly enriched loam. When we first moved here, there were only a handful of trees and the soil was a rough and barren patchwork of clay, sand and peat. It took years of aggressively planting but eventually a forest developed and with that forest came an assortment of shade-loving plants, not the least of which is the lovely beautyberry. I can't remember when I discovered the first plant but I remember how excited I was to chance upon the berry's unusually colored fruit.

A few days ago when I was walking through the woods, I realized that our forest was no longer home to a solitary specimen of Callicarpa americana. Thanks to the efforts of birds and small animals, dozens of beautyberries have taken root in the forest's fertile soil. Unlike the thousands of slash pines, bamboos and assorted ornamentals that Ralph and I laboriously planted, we didn't play any part in the propagation of beautyberry bushes. Animals did the hard work for us. Armadillos, fox, wood rats and raccoons nibbled on the berries along with bobwhites, thrashers, cardinals, mockingbirds, robins, towhees and woodpeckers. The bush's abundant and long-lasting fruit is a dependable food source while some other animals, like white-tailed deer, prefer nibbling on the plant's tender leaves.

Because so many animals eat the berries and, in the process, help spread the seeds, some people think beautyberry is a nuisance weed. I'm not among them. I'm fond of volunteer plants — especially pretty ones with interesting features. I like the way they surprise me with their presence.

Although I have never done more than look at and appreciate the berries, Callicarpa americana does have medicinal and edible qualities. A tea made out of the plant's roots is purported to relieve colic, dysentery and stomachaches while old time Floridians made jelly from the extremely astringent fruit. Native Americans added fresh beautyberry leaves to sweat baths as a remedy for rheumatism and fever and some people use the bark from stems and roots to relieve itchiness.

I'm too lazy to attempt jelly making and more likely to munch on a piece of candied ginger if my stomach feels unsettled than I am to dig up a beautyberry root to make tea, but I like learning about a plant's history and the different ways it is used by people around the world. I also like watching my woods fill up with uniquely colored botanicals. The fruit of Callicarpa americana is different than any other color I have found in nature. It is not quite purple or pink but some entirely different shade. I call it passion pink, the color of excitement.

Beautyberries in autumn are an exciting addition to the changing landscape. These compact, symmetrically formed, drought-tolerant bushes are one of Florida's best excuses to take a walk in a late October woods. Callicarpa americana berries last until midwinter, when they eventually shrivel up and dry on the stems, but don't wait that long. Beautyberry fruit are at their peak right now. Visit a park or wilderness area. Go for a walk in the woods. Discover the passion this Florida wildflower inspires.