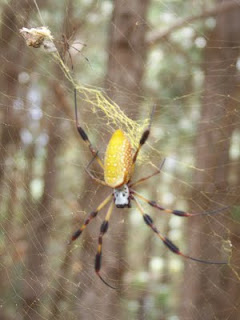 Ralph had just completed the first loop in his daily walk around the lake when he opened the door, stuck his head inside the house and called out.

"Come see this spider that has built a web in the pine woods. And bring your camera."

Not one to dally when a wildlife encounter is imminent, I pushed away from the computer, slipped into a pair of Crocs and grabbed the camera.

As we headed toward the woods, I asked, "What kind of spider is it?"

He responded with a single word: "Huge!"

Although many people are terrified by spiders, I'm not among them. Quite the contrary, I find the eight-legged creatures fascinating. I like the way spiders look, how they act, the type of structures they build and the way these patient predators capture and eventually consume their prey. On many occasions, I've asked Ralph to join me in observing a particularly beautiful specimen as it went about its bug-catching business. There are more than 700 kinds of spiders in Florida, and I have yet to see one that hasn't been interesting to watch. Knowing my enthusiasm, Ralph was eager to show me his find.

As we walked through the bamboo nursery to get to the piney woods, I paid attention to all the spiders we were passing. Arachnids seemed to be everywhere. Interwoven among plant leaves and branches were spiny orb weavers with their tiny, colorful, crablike carapaces. I saw black and yellow argiope spiders, easily identifiable by the bright white zigzag stitches in the center of their webs, long-jawed orb weavers and one green lynx spider that blended in so convincingly with the leaf it was sitting on that I almost didn't notice it.

When we approached the woods, Ralph put out an arm to stop me from walking farther.

"Look ahead," he commanded, pointing toward the shady path.

There, sitting in the middle of a magnificent web, was one of the largest spiders I had ever seen. It was a female golden silk spider, Nephila clavipes, with a body at least 3 inches long. Even more impressive than its massive size was the architectural wonder this consumer of dragonflies, moths and lizards had constructed.

Using secretions released from spinnerets attached to its abdomen, the spider had woven a silky tapestry that spanned a 12-foot-wide path. Anchored in several places to two slash pines, one on each side of the path, the intricately woven web billowed in the breeze like a gold-threaded sail. Toward the center were two spiders — the extremely large female with her bright yellow body and her much smaller, dull-colored, opposite-sex counterpart.

"Are you sure that's the male?" Ralph asked as he stepped closer to the web.

I knew it was, but my husband's doubt was justified. At first glance, the smaller spider looked more like a trapped bug than another Nephila clavipes. However, upon closer inspection, Ralph could see the resemblance. The nondescript, diminutive male hovering at the periphery of the web's hub was really a miniature version of the female. As with most invertebrates, female spiders are generally larger and more colorful than males.

We stood in the woods observing the spiders for quite a while. Although my interest was still piqued, I knew that Ralph was getting antsy and was eager to continue his walk.

"Go ahead on," I told him as I clicked off yet another picture. "I just want to take a few more shots."

Ralph isn't as patient as I am when it comes to observing nature, but neither of us has the patience of spiders. It must have taken hours for that golden silk spider to construct her amazing web. Once it was built, she had to have spent more time waiting for her golden snare to ensnarl a meal. If Ralph hadn't been so observant during the first loop of his walk around the lake, he would have walked into the web and destroyed the spider's work. Instead, his sharp eyes enabled him to avoid a sticky situation and provided me with another opportunity to observe one of nature's beauties.

If I had to choose between a spider web and the World Wide Web, it wouldn't be much of a contest. I'd push away from the computer every time to watch one of nature's most fascinating creatures spin a little magic. I just wish more people would