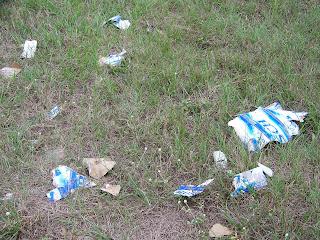 The road to my house is trashed. Plastic bags, fast-food containers and a random assortment of tossed-away items line the county-maintained, two-lane road that takes me home.

I recently returned from a weekend trip to southeastern Pennsylvania, where roadsides were surprisingly free of litter. With my host in the driver's seat, I was able to enjoy the view instead of concentrating on street signs and directions. What I saw as we traveled through one small town after another were pretty houses, harvested fields and neat yards. What I didn't see were plastic bags drifting across those fields, snagged on fences or fluttering from tree limbs. I didn't see piles of used tires stacked along streets, nor did I see the remains of yesterday's pick-up-and-go lunch.

In Florida, a more appropriate label for such fast-food fare would be a pick-up-and-throw meal, because so many residents of the Sunshine State treat the landscape like their personal landfill. When a beer can is empty, a cheeseburger consumed or a soda slurped, car windows get rolled down and those empty bottles, bags, cans, cups, straws, papers, plastics and cigarette butts get thrown away to join all the other litter lining our state's large and small roads. That seems to be the misguided mind-set of many Florida residents.

The curbed roadsides in small Pennsylvania towns such as Newtown, Yardley, New Hope and Wycombe didn't act as open-air receptacles for broken beer bottles or smashed soda cans. Even in Allentown, a small city (population 107,200) that's five times bigger than Leesburg, litter was a non-issue.

I wish it were a non-issue in Florida.

Crews from Lake County's public-works department spent much of October mowing the tall grasses that border the county-maintained roads. I watched as mowers hacked back months of overgrown weeds and untamed grasses. Unfortunately, while neatening the roadside, the machines chopped up and spewed massive amounts of trash. Hidden beneath the tall growth was a season's worth of garbage, and since mower blades can't differentiate between Bahia grass and broken glass, they scattered both.

I suppose that the remains of yesterday's fast-food lunch will decompose faster if shredded, but that doesn't make it any less of an eyesore. A drive down our county's roads is a portrait in ugliness, thanks to the inconsiderate actions of our fellow citizens.

Lake County has so much beauty. Our waterways, hills and small towns have a distinctive look unmatched by any other Florida county, yet we allow that beauty to be marred by litter.

Is it possible to change the way people act? How can we make litterbugs aware that what they do is wrong? Perhaps we can start by enforcing the existing Florida Litter Law, which carries community-service hours plus fines of $50 to $1,000, depending on the amount of trash dumped illegally.

Anyone who has received a ticket for going 55 in a 40 mph zone knows how effective speed traps can be. Driving habits change quickly when speeders face payment of hefty fines. Why not apply that same logic to litter? If police departments were to actively engage in an anti-littering campaign, not only would towns have a sudden source of new income but litterers also would quickly learn to stop breaking laws. If everyone who was used to flicking spent cigarettes out of car windows or throwing beer cans on the ground knew they stood a good chance of being fined, I bet we'd see a significant reduction in the amount of litter.

Or, we can continue to do nothing.

We can continue to tolerate the bad habits of others. We can let ugliness and inconsiderateness rule. When it comes right down to it, it's up to us — people who care enough to say, "This must stop." After all, litter is not going to go away by itself. Adopt-a-Road programs help, but they don't do enough. The only way to rein in the downpour of debris flooding our roads is to attack litterers where they are most vulnerable — in their wallets.

Fining litterbugs would be fine by me.