Cow encounter is unexpected and unforgettable 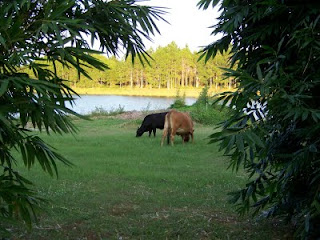 I'm always on the lookout for wildlife. I look for snakes and turtles, rabbits and armadillos, raccoons, foxes, bobcats, coyotes and birds of every shape and color. Whenever I walk into my kitchen, I find myself peering out a bay window that offers a long view of the yard, a path through the woods and the untamed acres beyond. I look because that vantage point has often rewarded me with wildlife sightings.

That's what I did the other day. Ralph was taking his midday siesta, which enabled me to anticipate some quiet "alone time" in the kitchen. My plan was to fix a nice lunch and eat at the kitchen table while sipping tea and reading Davita's Harp by Chaim Potok. It was a good plan, but it never happened. When I entered the kitchen, I did my usual glance out the window, and what I saw put everything else on hold.

Two cows were grazing about 25 feet away from the house. Although Ralph and I raise dozens of different bamboo, raising bovine is not part of the picture. We have no livestock, and ever since our dog and cat died a few years ago, we don't even have pets. Therefore, you can imagine my surprise when I saw not one but two large farm animals using our yard as if it were their private pasture.

I put my novel down, picked up the camera and entered "wildlife photographer" mode. The cattle — one a brown-and-white female and the other a jet-black male that appeared to be the female's calf — seemed indifferent to my presence. Their big, round eyes focused on the sudden surplus of succulent greenery as I surreptitiously followed. My digital camera clicked away as the cows munched their way up the hill and down the narrow path above the clay wall that borders our driveway.

The female was definitely in charge. Her youthful counterpart trailed with a timorous curiosity. At one point when I approached too close, the black calf became spooked. After fixing me with a gaze that seemed to say, "How dare you come so near!" he bounded off in a gangling trot. The calf caught up to his food-fixated parent who, by that time, had moved on to a greener patch of weedy grass.

Long ago, in our pre-children days, Ralph and I raised a few chickens and a small herd of goats, but neither of us have had experience with larger livestock. I didn't grow up riding horses, and, before this encounter, the closest I'd ever been to cattle was when I interviewed Bay Lake resident Stephanie Copper for a 2004 Orlando Sentinel article. Copper, who is something of a cow whisperer, regularly sings and talks to her small herd of Barzona beef cattle. During the interview, I watched in amazement as the blond cowgirl communed with her tail-swishing charges. She even introduced me to an imposing bull that responded to her caresses with an indulgent patience that bordered on love.

I can't say I love cattle, but I did love chancing upon a bovine moment in my own backyard. The cows, who must have escaped from a neighbor's herd, seemed equally delighted with their own discovery. The adage, "The grass is greener on the other side of the fence," kept coming to mind as I watched the grazing duo meander from one patch of tall grass to another.

I tagged along for about 15 minutes before returning home to my own midday meal. I was still in the kitchen a short time later when a loud crunching sound caught my attention. The cattle were striding across the lawn right next to the house, their hoofed feet crushing the fallen sycamore leaves.

Although I'm used to seeing wildlife through the kitchen window, the sight of two cows right next to the house threw me for a loop. Just when I thought my days couldn't get any crazier, stray cattle appeared from out of nowhere to graze on my front lawn. The whole episode reinforced my belief in expecting the unexpected. It also made me rethink the phrase "wildlife encounter." Perhaps wildlife "en-cow-nter" would be a more appropriate spelling. However it's spelled, my midday interaction was a moo-ving experience that was udderly (sorry about that) unforgettable.