Working together, we build our lives 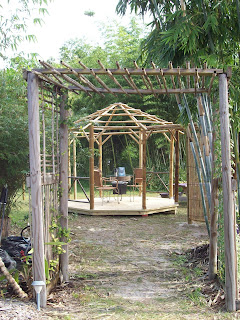 Last weekend, Ralph and I worked on a building project. We spent several hours finishing off sections of a bamboo gazebo with two attached pergolas. Our friend, Robbie Taylor, had already done the hard part. He had built the roof and the main frame of the structure, a beautiful eight-sided outdoor room made entirely of bamboo poles. When Robbie went off for a weeklong cruise with his wife and grandson, Ralph and I decided to pick up where he left off.

For a couple of out-of-practice carpenters, we didn't do half bad. We had our share of Laurel-and-Hardy moments resulting in a few scratches, splinters and a bit of wasted wood, but overall the project came together much as we imagined. I'd like to say it was fun and, in a way, it was. We were outside together, doing what we do best — planning things out and then making them happen. But the truth is, we're not really carpenters. Ralph doesn't like working with wood the way Robbie does, and although I have a passion for designing structures, I'm impatient when it comes to completing them.

There was a time when we felt different. In the 1970s, we were an idealistic young couple eager to build the house of our dreams. Because we weren't trained carpenters and didn't have enough money to hire others, we decided to do the job ourselves. I drew up plans and paid a carpenter to put up the frame. Ralph worked alongside him, watching everything he did and asking endless questions. I've always admired my husband's ability to pick up new skills. He's a remarkably adaptable and capable person who doesn't get discouraged the way some of us do — me, for example — when their first attempts fail or their beginning efforts are less than perfect.

With his newly attained skills, Ralph worked his way through the remaining homebuilding tasks. He insulated, wired and put up drywall. He built and installed cabinets, put on the roof, installed windows and shingled the exterior. He was in charge. I was the gofer.

"Sherry, bring me the box of six-penny nails," he would ask, or "Get me the screwdriver with the Phillips head bit." Unlike Ralph, who never felt insignificant or bothered when he assisted the framer, I often found myself annoyed by his constant demands. That feeling resurfaced last weekend when we worked on the gazebo.

"I feel like I'm not doing enough just standing here holding the ladder and handing you things," I told my husband as we worked on attaching the pergola roof.

"You're doing fine," he reassured me. "It saves a lot of time with you there to help."

In my younger years, I might have dismissed that comment as condescending, but not anymore. I've realized the truth in those simple words. When you work together, you share responsibilities, acknowledge each other's abilities and do whatever is necessary to get the job done.

Instead of getting upset because I wasn't the one in charge, I used the time to stand back and admire the man I married 39 years ago this month. As I stood there on the ground, watching my husband sacrifice his time to give me a structure I wanted, I realized how far we'd come since that first carpentry project in the 1970s. Working as a team, we've not only built and renovated dozens of houses but, more important, we've constructed a life that reflects our dreams.

Building a long-lasting marriage is a lot like framing a gazebo. Someone has to be willing to pick up fallen nails, steady the ladder and get the necessary tools to make the structure stronger. You don't have to be a master carpenter to whittle together a satisfying life, but it helps if you can share the work with someone you love.