Traditional pie -- minus all that unhealthy stuff 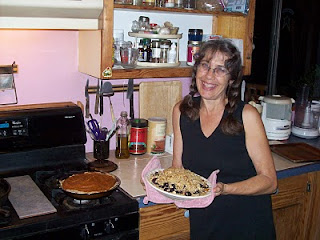 (To see recipes, please scroll to the bottom of the page)

Lately I've been in the mood for pie, so I've been baking up a storm. Sweet-potato pie and blueberry-peach pie are my favorites, but sometimes I experiment with other fruit combinations. Our son Toby really liked the cherry-peach pie I cobbled together when he was home from college. And not too long ago, when I had an abundance of overripe pears, I made a cherry-pear pie with a chopped-nut top crust that had Ralph begging for more.

Pie is such an easy and foolproof dessert to make. Even though I don't use any of the usual ingredients — no sugar, white flour, butter or shortening — my pies taste delicious, consistently earning requests for second and third slices.

Instead of using white flour, I bake with either whole wheat or spelt flour. I especially like the slightly nutty, sweet flavor of spelt flour, which creates a crust that is flavorful without being heavy. White flour (also euphemistically called wheat flour) is a refined food that has had two of the most nutritious parts of the wheat grain removed — the bran and the germ. Even the enriched version of white flour is sadly lacking in nutritional value, since it includes less than a quarter of the grain's original nutrients.

By contrast, spelt flour, a grain in the wheat family, is chockfull of nutritional value. It is high in protein and rich in B-complex vitamins, and it contains a carbohydrate that boosts the immune system. Although no one in my family is allergic to wheat, people who are often find the proteins in spelt easier to digest.

In place of butter, lard or shortening, I use extra-virgin olive oil. If you think olive oil is good only for salad dressing, think again. One-quarter cup of olive oil added to a cup of spelt flour and moistened with an eighth of a cup of ice water yields a delicious, flaky crust that has none of the artery-clogging fat of butter, contains no cholesterol and no chemical additives and is an excellent source of mono-unsaturated fats, vitamin E and beneficial antioxidants.

When I'm feeling ambitious, I make a special pie crust created by my friend Selena. Selena's crust combines a cup of flour — I use either spelt or whole-wheat flour — with a cup each of rolled oats and finely chopped nuts. (I like to use a combination of unsalted, raw almonds, walnuts and Brazil nuts.)

After the dry ingredients are mixed, Selena adds a half-cup of both olive oil and maple syrup, but I substitute two teaspoons of calorie-free stevia for the maple syrup. After the dry and wet ingredients are well blended, I press two-thirds of the mixture into a pie pan, with the remaining portion set aside to spread on top of the desired filling. Unlike my flour crust, which does not require precooking, Selena's crust works better when baked in a 350-degree oven for 15 minutes before filling.

Stevia, the sweetener I like using in Selena's pie crust and for almost all my baking, is a plant-based product with no bitter aftertaste. A member of the Compositae family of herbs — the same family as asters, sunflowers and daisies — stevia is not an artificially derived chemical and doesn't raise blood-sugar levels. What it does do is add sweetness to food without adding calories. In its powdered form, stevia (also sold under the name Truvia) looks identical to sugar, but it's far sweeter. One teaspoon of stevia is equal to a cup of sugar.

One of the things I like best about baking with wholesome ingredients such as whole-wheat or spelt flour, stevia, rolled oats, unsalted raw nuts and extra-virgin olive oil is the lack of guilt involved. You can make foods, eat them and feel good about the entire process. There's not even guilt the next morning when you bite into a slice of leftover pie for breakfast.

Yesterday Ralph and I made short work of the two remaining slices of our sweet-potato and blueberry-peach pies, which means it's time to replenish the proverbial larder with another batch of tasty treats. Eating healthfully doesn't have to be about giving up favorite foods or eating a bland, flavorless diet. You can have it all — including pie — if you're willing to learn about more nutritional alternatives, experiment with different ingredients and open yourself up to new tastes and textures.