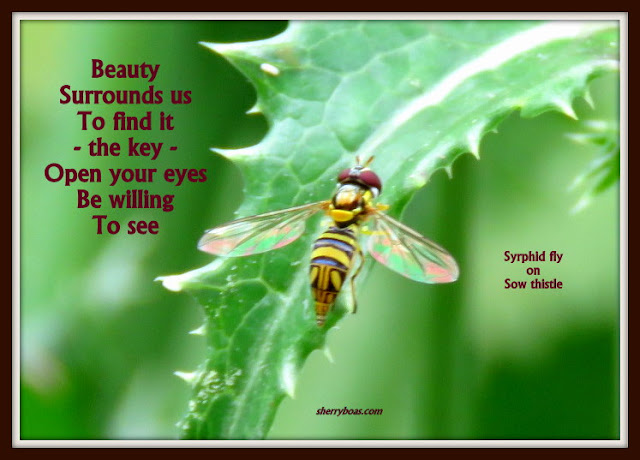 I was outside taking pictures when I noticed a very small fly hovering around the sow thistle plant.  I didn't know what kind of fly it was but later, after looking at the image on the computer, I was awed by its beauty. Such colors in its thin, transparent wings!  Its two reddish-brown eyes are huge and it has such an amazing pattern covering its abdomen and thorax.

After doing some research, I found out the 1/4" long insect is called a Syrphid fly -  Allograpta obliqua - and it is one of the good guys, a beneficial insect that preys on aphids.  If I hadn't taken the time to look closely at a prickly plant that most people would rather avoid, I wouldn't have noticed the Syrphid fly at all.

So often, I've found, it's the small, unexpected wonders that fill me with pleasure.  They are treasure for the taking, if you take the time to look.

You can learn more about Syrphid flies at the Growing Produce website
Posted by sherry boas at 12:29 PM