Why I let some weeds grow 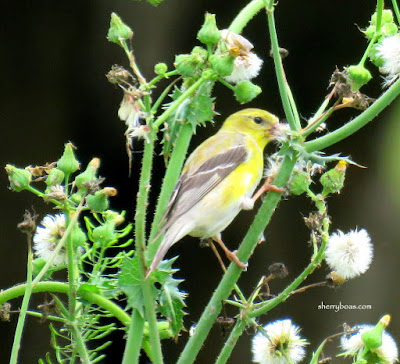 Even though all three species are edible, the broad leaves of these weedy members of the Aster family have sharp prickly edges that can poke and scratch skin.

Like its dandelion cousin, sow thistle also bears yellow flowers. However, instead of growing low to the ground, sow thistle grows tall — up to six feet high — and each plant produces dozens of small daisy-like flowers that are not particularly showy.

When wind blows, the fluff takes flight carrying the attached seeds wherever the breeze takes them.


Sow thistle has the potential to generate a tremendous number of progeny. Each plant can produce 4,000 to 13,000 airborne seeds. Even more astounding is the fact that after landing, each seed can remain viable for up to six years. This means if a seed touches down in the wrong spot or during unfavorable conditions, it has the ability to wait until its situation changes.

If those characteristics are not enough to put sow thistle on the home gardener’s do-not-grow list, consider its root system. Sow thistle sends a taproot several feet into the soil as well as producing lateral side roots that spread vigorously underground in all directions. Combine these two extremely effective methods of propagation and you have a species with strong survival instincts and a bad reputation in gardening communities.

Sow thistle is such an invasive, fast-growing plant that people who love a well-behaved landscape usually hate sow thistle. I can understand that. My less-than-well-behaved landscape harbors a huge contingency of these botanical miscreants. They’ve popped up under the mulberry trees, around the trampoline and in the middle of the lawn, which truthfully is less lawn and more a motley assortment of green-colored weeds.

Initially, I didn’t mind the sow thistle plants in our yard, but once they started to grow tall, I knew I needed to deal with them. Mowing is an effective control, especially when done before the plants go to seed. So, that’s what I did. I revved up the battery-powered weed-whacker and whacked the sow thistles down. I chopped all of them except for two plants that I can see from the kitchen window.

I left those because, despite its many negative characteristics, sow thistle has positive features, too. As mentioned before, it is an edible plant. For thousands of years, people around the world have eaten the tender young leaves, which make a nutritious potherb and salad green similar to spinach. While I’ve personally never tasted them, I’ve watched wildlife attracted to the plant for food. Bees, flies and wasps gather nectar, and birds search among the leaves for seeds and insects. 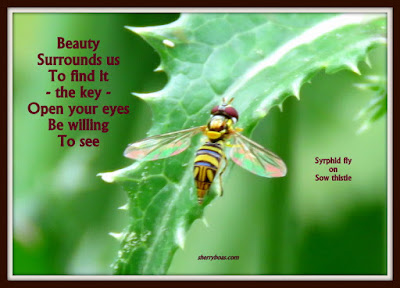 The other day I photographed a palm warbler flitting around one of the tall sow thistle plants. It might have been after all the aphids on the stems or it could have been catching grasshoppers, gnats or flies.

Regardless of which prey it was seeking, watching the warbler hunt for food was gratifying and fun. It was even more fun a couple days later when I caught sight of a goldfinch pecking away on sow thistle seeds, fluff and all.


Both observations confirmed my instinct to save a few robust specimens of this unpopular plant from the mower’s blade. Allowing one or two sow thistle plants to grow may not be appropriate for every yard, but for my wildlife-friendly homestead, it seemed the natural thing to do.
Posted by sherry boas at 4:24 AM