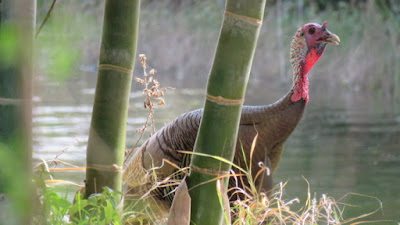 There’s a turkey in our yard — again.

For several weeks, he’s been a regular visitor, spending daylight hours meandering around our weedy lawn on a lazy search for food. Judging from the droppings left behind, he’s found plenty of bugs, seeds, fruit, frogs and anoles to eat. Apparently, our overgrown yard and abutting fields provide enough foraging fare to satisfy his paltry poultry needs.

My new feathered friend appears to be a healthy male specimen of Meleagris gallopavo Osceola, commonly called an Osceola or Florida turkey. The Sunshine State is home for up to 100,000 turkeys including the Osceola, a subspecies of the eastern wild turkey. Because the Osceola only exists in Florida, it is much coveted by hunters.

My husband and I don’t hunt, but if we did, we could have an easy meal. This particular Jake — the name for a young male turkey — frequently wanders by the porch door. I’ve watched him strut past the trampoline, poke the ground for worms, beetles and grubs and settle down to rest on our concrete patio’s leaf-strewn surface. On mornings when I didn’t realize he was there, I’ve stepped outside and faced a stare-down as we stood less than five feet apart waiting to see which of us — it’s usually me — retreats first.


I can’t say he’s tame, but he doesn’t act completely wild either. This bird is a puzzlement — a bearded, bald, red-necked enigma with feathers and spurs.

A mature male Osceola is about 3½ feet tall and weighs up to 20 pounds. In addition to being endemic to Florida, the Osceola also has the distinction of being the smallest wild turkey in the United States. His predominately-black feathers have an iridescent green and red tint. His bald head is reddish, and a fleshy red wattle or dewlap stretches beneath his chin. Below his wattle and across his neck hang several knobby growths called caruncles. On his forehead, he has a pointy appendage called a snood.

While a wild turkey’s head may not be an attractive feature to human eyes, female turkeys find it quite alluring. When a female is ready to mate, she checks out a potential partner’s feather display, the gobbling sounds and drumming noises he makes as well as the cocky way he struts his stuff. She also considers the length of his snood. The longer, the better as far as the female turkey is concerned.

I suspect that the male turkey we’ve been seeing is in wanderlust mode, roaming about alone until he is ready to mate. I have tried to determine his age by observing markers that indicate maturity. Judging the length of the spurs on his feet and the beard extending from his chest, I mark him between 16 and 18 months, which is old enough to mate but too young to be a dominant male. During wild turkey reproductive season, March through May, females often mate with numerous partners but not all eligible males rank high enough in wild fowl hierarchy to score a mate.

Regardless of whether I’m correct about his age and status, I’ve gained substantial insight into wild turkey behavior thanks to his frequent forays in our yard. The male Osceola turkey may not be one of the handsomest blokes on the block but he’s an interesting fellow to observe.

My only complaint is the mess he makes on our walkways. If he’d just stop depositing droppings on our paving stones and patio, I’d be completely charmed. Female turkeys may appreciate his head and fancy feather display, but to me, good bathroom behavior is a far more attractive trait.
Posted by sherry boas at 5:51 AM