Borrowing books is easier thanks to Little Free Libraries

Libraries are the best. I'm a regular at my local libraries.

I love everything about the concept of borrowing books, which is why I am so excited by a new kind of lending facility popping up in shopping areas, neighborhoods and communities around the globe.

I'm talking about "Little Free Libraries," a movement that started seven years ago in Hudson, Wis., when artisan Todd Bol decided to honor his mother, a teacher who loved to read, by building a model of a one-room schoolhouse and mounting it on a post in his front yard. Bol stocked his miniature little red schoolhouse with reading material and a sign that said "Free Books."

He then invited friends and neighbors to take anything they wanted. The response was amazing. Books flew out of the wooden structure just as quickly as new ones arrived, contributed by readers with volumes to share.

News about Bol's book depository traveled fast. Before long, people began asking if he could make little libraries for them too and Bol did. He built and gave away several more structures before joining forces with Rick Brooks, a youth and community development educator at the University of Wisconsin's Madison campus. Together, Bol and Brooks fine-tuned the concept and helped spread the idea of Little Free Libraries through social media.

In May 2012, Little Free Library officially was established as a Wisconsin nonprofit corporation. Today, nine years after Bol built the first one, more than 36,000 registered Little Free Library book exchanges are in all 50 U.S. states and more than 70 countries around the world. One man's desire to do something nice as a tribute to his mother turned into a worldwide phenomenon of the sharing economy.

I found my first Little Free Library a year ago in front of a private residence in New Smyrna Beach on aptly named Faulkner Street. It's easy to tell from the creatively decorated appearance of the two-compartment, glass-fronted, wooden enclosure that the Faulkner Street book box is a labor of love handmade by a family that values reading. The top section contains a constantly changing mix of fiction and non-fiction titles while the bottom part — with a separate latch that kids can reach — overflows with children's books.

Unlike the New Smyrna Beach box, the next Little Free Library I discovered was exclusively for children. It's located inside Axum Coffee at 146 West Plant Street in Winter Garden on a low table next to the kid's play corner.

Instead of being a homemade structure, the glass-fronted, cedar-roofed mini-library is one of several designs available directly from the Little Free Library website where models start at $149.

But it was my most recent discovery in downtown Clermont that really excited me. According to the non-profit organization's website, there are 257 registered Little Free Libraries in the Sunshine State but only three in Lake County. Two are in Tavares. The third one — the one I happened upon the other day — is in front of The Barn Yarn in downtown Clermont.

Angela Territo, owner of business, built, decorated and installed her Little Free Library outside her West Montrose street storefront. The tall, colorfully painted structure caught my attention as I was browsing Clermont's downtown business district. The grandfather clock-sized cabinet includes four shelves for books. Handwritten signs that say: "Take a book, Leave a book" and "Sharing is Caring" are taped to the two hinged, glass-fronted doors.

In this day of digital this and online that, I find it tremendously reassuring to know that there are others close to home who not only share my passion for real, hold-in-your-hand, turn-the-page books but also support the free exchange of reading materials for all people no matter what their age or where they live.

One day soon, I plan to join this devoted group of bibliophiles by building a Little Free Library of my own. Maybe mine with be Lake County's fourth library to be registered with the Wisconsin-based organization — unless someone beats me to it. I wouldn't mind that at all. No matter who does it first, everyone wins. 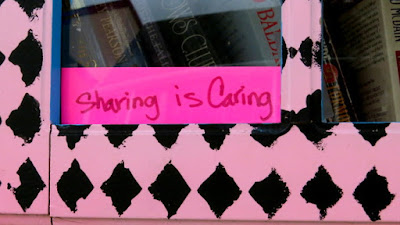