I was on my way to the car after shopping at my local Publix when I saw something I had never seen in a Publix parking lot before.

Sitting in the upper branches of a scrawny oak tree were birds - hundreds of birds! I’m not talking about grackles, cowbirds, starlings or sparrows – the usual crowd of avian opportunists that frequent parking lots. No, sitting on top of the tree were cedar waxwings, migratory birds that travel in flocks from northern homes to warmer climes in search of ripening berries or fruit. 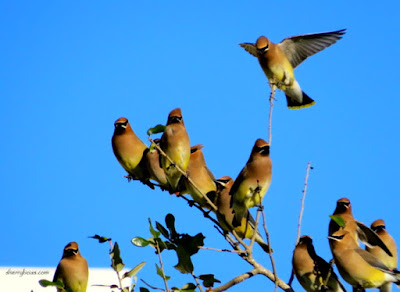 Cedar waxwings are beautiful birds similar in size to cardinals. Their upper plumage is a mix of grayish-brown feathers with yellow-white undersides. A single dot of waxy red color brightens each wingtip while a bright yellow band highlights the ends of their tail feathers. Their crested heads are predominantly brown but the most telling feature of these seasonal visitors to the Sunshine State is the rakish black mask that covers their eyes. Bandits wear masks and cedar waxwings might just be the ‘baddest’ berry-snatching birds around. 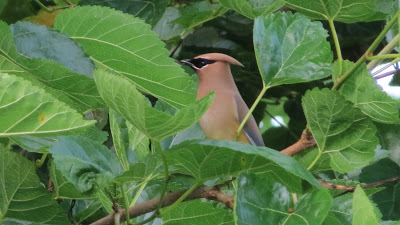 Several weeks prior to noticing the flock perched in the parking lot tree I’d been on the lookout for the feathery thieves. I knew they were in the area because members of online bird groups had been posting photos of cedar waxwing sightings. Waxwings usually stop by our property to devour our mulberry and loquat crops but this year the mulberries and loquats are a little late, which is probably why they had not yet arrived.

Because these social birds feed in flocks that often number in the hundreds, they prefer fruitful locations where they can fill their bellies fast and furiously. Blueberry and strawberry farms suffer when waxwings settle in for an afternoon of feasting. Loud noises, owl decoys, recordings of hawk calls and even shotgun pellets do little to deter these determined devotees of plucking ripe fruit off bushes, vines and trees.

As I stood in the middle of the Publix parking lot leaning against my car and watching the birds, I wondered what they were after. The sparse plantings of scrubby oaks in the parking lot held no bounty of berry or fruit. Without an immediate source of food, the birds were either using the tree as a rest stop in between bouts of feasting nearby or as a fly-by roost en route to greener pastures elsewhere.

As amazing as it was to observe such an incongruous spectacle - hundreds of chattering waxwings perched on the uppermost limbs of run-of-the-mill parking lot trees – I was more amazed by what little attention they garnered. Even with the birds squawking away and me making a spectacle of myself in the parking lot leaning against the car to take pictures, I saw no one else looking up at the birds or asking what I was photographing.

My recent birds-in-the-parking-lot encounter shows that nature does not have an on-off switch. Natural wonders can occur any time at any place. You don’t need specific training to appreciate beauty or even know what you’re looking at to see something special. You just have to be there. Be aware, care and be open to experiencing the moment.

Doing so is not always easy. Responsibilities and obligations demand our time while worries, concerns and chores cloud our minds. Fortunately, unlike nature, people do have an on-off switch. We have the ability to put the busy world on hold, mute the mental chatter and refocus our attention on the sights, sound and sensations that surround us.

Every now and then, we can choose to snap out of our preoccupied states and see something amazing. We can experience wonder. A more poignant wonder is why so few people do…
Posted by sherry boas at 3:42 AM