The cattle in my neighbor's pasture are grazing a mountain.

It's not a mountain by New England standards and certainly not compared to the topography of the Great Rocky or Blue Ridge ranges. But for here in Central Florida, the weed-covered mounds of earth that protrude from a corner of my neighbor's field seem mountainous, at least from a bovine perspective. 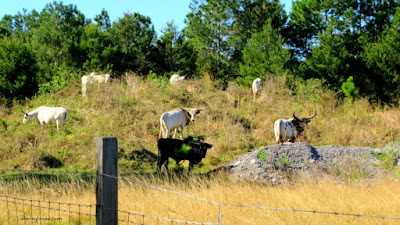 They are actually the forgotten byproducts of construction projects. My neighbor, who has an earth-moving company, has deposited leftover road-building materials in that corner for years. Stacks of red clay stand alongside piles of sand, lime rock and gravel. Over time, wind and rain have melded those raw materials together until their separate colors, textures and shapes can no longer be differentiated one from another. To the cattle's eyes, and to mine as well, the entire corner appears as one large undulating mass of plant-covered ground, a rolling oasis in an otherwise level field.

It pleased me when I drove by to see the livestock chewing their way up and down the hilly terrain. Although the cattle may have conquered Mount Surplus before, this was the first time I'd seen them there. I pulled the car off the dirt road and shut off the engine so I could quietly watch the small herd of white, brown, black and spotted cattle doing what cattle do best — graze. 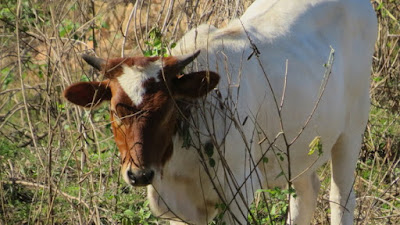 As I sat there wondering if the animals were enjoying the change in altitude, an all-black calf that had made his way up to the top of a mound suddenly ran awkwardly downward. Was he playing? Did he have fun? Did the hilly terrain present a pleasant change from the dull routine of grazing flat field fodder?

The cattle were too busy filling their bellies to pay attention to the youngster's antics, but I watched with interest as the entire herd found ways to enjoy their newfound bounty. While the two young calves were exploring the sloping trails, each adult member of the slow-moving herd meandered along until it found a spot — an individual grazing station — where it could chew off and consume new plant growth, overlooked stems, seedheads and leaves. 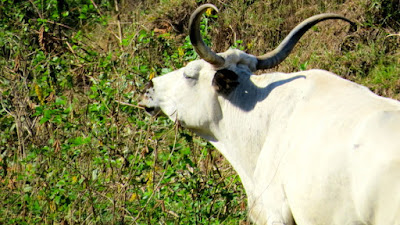 It was a bucolic scene. If I didn't know better, I could easily imagine a real mountain, or at least a series of rolling hills in New England or North Carolina, on which a herd of cattle contentedly grazed.

I sat watching the animals for quite a while before continuing home where, on our own acreage, I passed several large piles of woodchips in various stages of decomposition. We have no livestock to graze and explore our mountains-in-the-making but we do have grandchildren who, not unlike the little black calf, have fun climbing up and running down the sloping sides of our towering stacks. 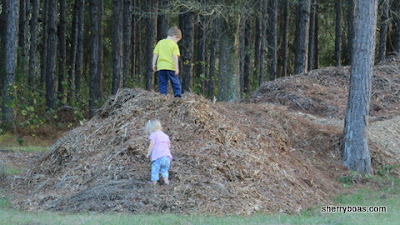 I suppose it doesn't matter if you're a long-lashed bovine or a bright-eyed child, anything a little different is bound to get attention. 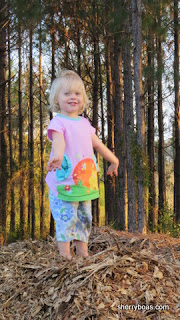 The cattle in my neighbor's pasture were grazing a mountain. It may not have been a real mountain, but that didn't seem to matter. The old adage says not to make a mountain out of a molehill, but it doesn't say anything about not building one out of woodchips or surplus road-building materials.
Posted by sherry boas at 5:11 AM