I was walking down the path from our beach house to the car when I saw a snake stretched out across the shells. At least I thought it was a snake.

When I squatted down for a closer look, something about its smooth, shiny body didn’t seem to fit any snake I recognized. I snapped several pictures of the foot-long, finger-thick fellow, who was completely unfazed by my presence, with the intention of doing some research later to learn exactly what kind of snake it was.

As it turned out, it wasn’t a snake at all. The slender bodied, legless animal I saw was a glass lizard, most likely an Island Glass lizard, one of four species of glass lizards in Florida.

Glass lizards belong to the scientific genus Ophisaurus, from the Greek meaning “snake-lizard.” Its common name, glass lizard, comes from the animal’s ability when being pursued to break off its tail into one or more pieces. After being severed, the appendage wriggles about, distracting enemies, which gives the lizard time to escape. As with many other types of lizards, glass lizards can regenerate severed tails. Doing so takes nine months or longer.

The critter I encountered didn’t have a severed tail. Its slender brown, black and tan, speckled body was completely intact. While its shape was almost wormlike — pointy at the tail, smooth and rounded at the head — it was far too long and colorful to be a worm. It was also the wrong size to be a skink, another type of lizard with a smooth, colorful and shimmery appearance but with four small legs. I simply assumed it was a snake.

A little research shed light on the subject. 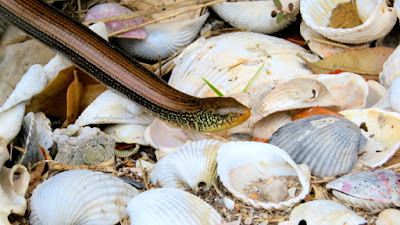 Although they look alike, snakes and glass lizards have distinctive differences. Unlike snakes, glass lizards have moveable eyelids and external ear openings. Bones called osteoderms cause their bodies to be brittle, resulting in more rigid movement than snakes have when slithering effortlessly across the ground. A glass lizard also lacks a snake’s ability to unhinge its jawbones, which causes a diet restricted to invertebrates no larger than the size of its head. 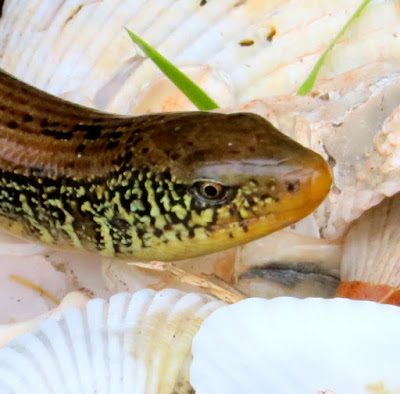 I sensed a sudden interest from my husband Ralph when I told him what a glass lizard eats. To my vegetable-growing partner, any animal that helps control garden pests like grasshoppers, beetles, caterpillars and snails is worthy of attention.

It may have taken a special hook to pique Ralph’s interest but the glass lizard fascinated me from the get-go, even before I knew what it was.

I only noticed the snake-like critter because I looked down while walking to the car. Some might say I wasted time by stopping, but I disagree. To me, little pauses in my routine often yield invaluable benefits like expanded empathy, knowledge and understanding of the world outside my door.

I never know what surprises will come my way on any given day. What I do know is that the best discoveries happen when I pay attention to my surroundings. If that means eyes to the ground when I take a walk, so be it. Exciting things are found when I take the time — make the time — to look around and enjoy the everyday wonders of simply living.
Posted by sherry boas at 5:57 AM