The other day, my husband Ralph and I were walking through the woods in the early afternoon on a route we call the ‘high trail.’

Twenty years ago, the high trail was a narrow path along the upper edge of a gently sloping hillside. It was the highest part of an extensive field where we used to bale hay. Every year we’d mow down and rake tall grasses into windrows before dotting the landscape with square bales of hay. Eventually, haying lost its appeal, and we decided to convert the field to forest by planting thousands of pine seedlings on the open land.

At first, it seemed like it was taking forever for the young trees to gain stature, but eventually, the tiny pines grew tall alongside volunteer oaks, wild persimmons, cherry laurels and other plants that sprouted from seeds spread by wind and wildlife.

That afternoon as Ralph and I walked along the shady path, we talked about how much the landscape had changed since those long-ago days. A forest that once existed only in our imagination was now a mature, dense woods inhabited by wild turkeys, coyotes, raccoons and bobcats. We were in the middle of discussing how easy it would be for wildlife to disappear in the woods when a sudden burst of motion caught my attention.

“An owl!” I exclaimed pointing toward a large dark shape flying silently through the trees. “A big owl just flew by.”

By following its flight path, we spotted the owl perched on a small bough near the top of a slash pine tree. From where we stood about 50 feet away, we could see it clearly. 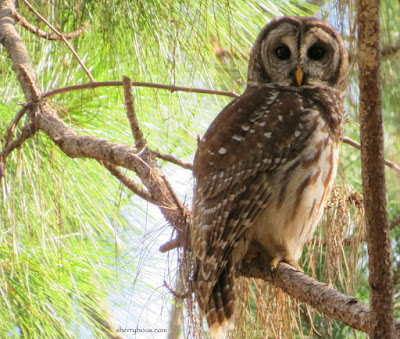 The first thing that struck us both was how big the bird was. A mature barred owl stands about 18-inches tall with a 39- to 43-inch wingspan and can weigh up to 2.5 pounds.

The second thing we noticed was its eyes — two large dark orbs set above a small yellow beak in a grey-white face. Unlike a great horned owl or Eastern screech owl, a barred owl lacks ear tufts so its round head is smooth. Its plumage is grayish-brown with tan to white edges and brown bars on its wings. We stood watching the owl while it watched us, but it did so only briefly before directing its attention elsewhere. By rotating its head almost completely around, the owl scanned the forest in every direction. 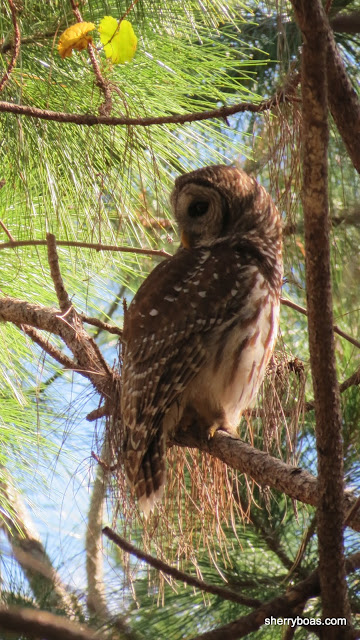 The sighting caught me completely by surprise. I stood there fascinated, feeling like I could stand there watching the bird for hours. I’ve seen a barred owl a few times before but this was my first daytime sighting, and I hoped to observe it for as long as possible. Although Ralph initially shared my excitement, we both knew that standing still is not his forte. His body needs to be active, and so he picked up the loppers he carried along on our walk and used them to cut down some of the wild grapevines that have invaded the forest.

While Ralph chopped vines, I took pictures and a short video. I was shooting the video when I noticed the owl crane its neck in the direction of some distant movement deeper in the forest. Moments later, it took off, its broad wings propelling it toward whatever prey its sharp eyes had spotted.

I lost sight of my subject when it silently flew away so I don’t know where it landed or what victim it pursued. It could have been on the hunt for a small mammal, amphibian, reptile, little bird, large insect or even a fish. A barred owl considers anything it can swallow to be potential prey.

I don’t see owls very often. Especially large owls and especially in the daytime. But the other day, that’s exactly what I chanced upon. Although I never know what I’m going to find when I take a walk or a row, one thing I do know is that whenever I go out in nature, something special is bound to happen. The other day, that something special was a rare sighting of a barred owl in the daytime. I can’t wait to see what it will be tomorrow.