Too much of a good thing?

I should have been making dinner. Instead, I was dawdling in the dirt. It had rained earlier, and the damp ground made weeding easy. Even deep-rooted weeds gave way with the slightest tug.

I’d been on my hands and knees for about an hour and although there was more to do — in a garden, there’s always more to do — my back said to rest, so I settled into a chair, picked up my mug of no-longer-steaming tea and surveyed my surroundings.

While I savored that first sip, a female cardinal flew by with a length of grassy material dangling from her beak. As she disappeared into a nearby bottlebrush tree, it dawned on me that: A) she was probably building a nest right there in the garden, and B) she was building it out of weeds I’d just pulled. 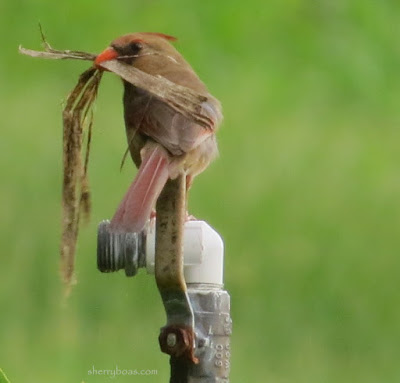 Needless to say, the discovery of a nest-building bird in my south garden was a game changer. Opportunities for such close observation are rare. I tossed aside any further thoughts of pulling weeds and focused my attention instead on learning as much as I could about the cardinal’s nest-building habits.

One of the first things I realized was that a cardinal nest is a female work zone. While the red-feathered male was nearby — he flew over intermittently to check things out — his less colorful counterpart did all the heavy lifting. The female found the nesting material, transported it to the work site and wove each weed, twig, leaf and string of Spanish moss seamlessly into place. The male acted as protector, chasing away another female cardinal who chanced by, but I never saw him assist in the actual construction of the structure. 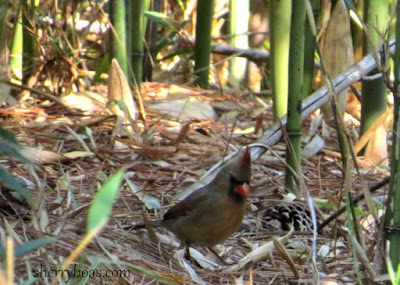 Although I began watching outside, I soon moved into the house and set up an observation station by the bedroom window. From there, I had a clear view of the bird activity just a few feet away.

Back and forth the female flew. She never went far and always came back with a beak full of material. As I watched her scratch the ground in search of just the right size and shape leaf material, I marveled at her ability to not only build a nest by herself but also to know instinctively how to make it structurally secure and beautiful. 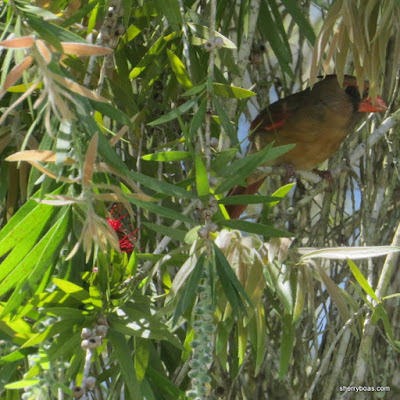 I must have sat watching for a couple hours. My husband Ralph came by a couple times wondering what I was doing and asked if I was getting hungry. I wasn’t, but I guessed he was. After his second inquiry, I decided to exchange my observation post for a more active role in the kitchen.

By the time dinner was over, it was dark. I went to sleep that night anticipating being awakened by a cardinal singing in its nest. Unfortunately, the morning broke with no birdsongs at all. Not only weren’t the cardinals singing, the female was no longer busy working on her nest. She seemed to have abandoned it sometime the previous evening after I left to make dinner.

To say I was disappointed would be an understatement. My excitement and anticipation faded into feelings of sadness and concern. Why had the birds left, and did I have anything to do with it? Even though I was mainly watching from inside the house, I wondered if my presence had a bearing on the birds’ decision to leave. Questions tumbled through my mind as I went about my day.

I realize projects aren’t always completed. I never finished the weeding I started, and birds don’t always finish building nests that they’ve begun. I’ve seen Carolina wrens and collared doves abandon uncompleted nests so there’s no reason to suspect cardinals don’t do the same. But I also realize I may have been watching a bit too closely. There’s a fine line between being intent on learning and craving knowledge too intensely. I have an uneasy feeling this is one case in which my eagerness to learn might have gotten the better of me.
Posted by sherry boas at 5:38 AM