Crabby discovery at the beach

Although my husband Ralph and I have had a get-away place at the beach for only a few months, it didn't take long to realize how different an ocean-side habitat is from our residence alongside a small lake in the middle of the state.

Despite being less than two hours away from our Lake County house, the beachside retreat is home to an entirely different set of flora and fauna. Among the many new-to-me plants, birds, fish and animals is a particular crustacean, the Giant Blue Land Crab, Cardisoma guanhumi, rarely found more than five miles from the coast.


On a recent visit, I took a stroll through the Indian River Lagoon Preserve, 200 acres of natural uplands in New Smyrna Beach. In addition to a covered pavilion, fishing dock and kayak launch, the park has a nature walk that winds through various habitats. While walking along the paved path, I stopped frequently to observe the trees, peek through the foliage and explore the ground for any creatures I could find. I also paused often to read the informative signs that explained what I might expect to see along the way.

What I didn’t expect, however, was to be the one under observation.

When I stood on a bridge over a tidal creek and looked down at the mucky ground, I sensed a scurrying motion below. Looking closer, I noticed several pairs of alien-looking eyes poking up out of brightly-colored, crusty-shelled bodies. Much to my surprise, the ground was dotted with holes. Standing next to or protruding from each burrow was a crab. I had suddenly become a subject of interest to an entire community of peculiar-looking crustaceans. 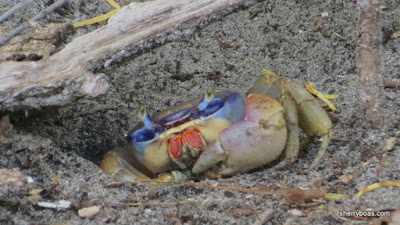 This was my first encounter with Giant Blue Land Crabs, although I have lived in Florida for almost 30 years. Not only did I lack knowledge about their habitat, behavior and lifecycle, I didn’t even realize they existed until I saw them at the preserve.

While I may have been oblivious, many residents of seaside communities know them well. In the Bahamas and Caribbean, Giant Blue Land Crabs are an important part of the local diet, often added to stews and considered a delicacy. They are also eaten in Florida, but do not share the same culinary appeal of the more popular Blue Crab. In Florida, harvesting Giant Blue Land Crab is legal November through the end of June. Harvesting of crabs, which can weigh up to 18 ounces and grow to 14-inches across with 5.9-inch-long claws, is legal November through the end of June. It is banned from July 1 to October 31, the period when egg-bearing females are migrating.

After mating with a male in his underground burrow, the female remains submerged for about two weeks until the larva, which she carries beneath her body, are ready to hatch. She then leaves the burrow and migrates to the ocean to release her cache in the shallow offshore water. A female may produce up to 250,000 eggs per spawn, but barely one percent will reach maturity. The majority fall victim to predators, pollution and disease.

It takes four years for Giant Blue Land Crab to reach maturity. During that time, the crustacean that begins life as a tiny larva will grow and molt 60 times. It will leave the ocean and return to land. It will dig burrows several feet deep and eat a mainly vegetarian diet augmented by the occasional beetle, large insect or meal of carrion.

In addition to people who capture them for food — the white meat of the ten-legged critter reportedly is quite sweet — raccoons and armadillos find them tasty, too. Homeowners who dislike having their lawns dotted with deep holes also kill giant land crabs.

With so many dangers threatening their existence, it’s no wonder the Giant Blue Land Crab community at Indian River Lagoon Preserve was on high alert when I paused in my meandering to look out over the estuary. I’m glad the carapace-covered crustaceans sensed my approach and acted cautiously. Although my intentions were harmless, I could just as easily have been there to catch dinner.

I left the park that day thrilled with my find. While the animals I chanced upon were only crabs, to me they were something new, a different and curious creature to learn about and observe. There are many reasons why Ralph and I enjoy our trips to the beach, not the least of which are all the exciting new experiences an unfamiliar area provides. When it comes to the beach, I’m ‘shore’ ready to learn.
Posted by sherry boas at 6:42 AM