Little things can mean so much

A "Simply" Extra
When I was rowing yesterday evening, I rested my oars and picked up my camera as I approached the north end of the lake where a tangle of willow, wax myrtle and buttonbush branches hang over the water.

Birds are always flitting around that area and I was curious to see what I might capture on film.

The first birds I saw were bright yellow, perhaps some type of warbler but they moved so quickly I was unable to snap a picture fast enough.

I was more successful with a curious little tufted titmouse that decided to come out of the brush to check me out.  After cocking his head left and right, he flew over to a limb where a passionflower vine grew.
Losing interest in me, he focused instead on insects crawling over a passionfruit hanging from one of the vines. 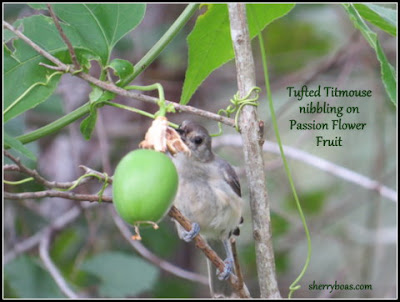 A few minutes later, I first heard then saw a pileated woodpecker in a nearby tree.  I wasn't able to get a good view of the bird but I was excited to see it at all.  We never used to have pileated woodpeckers on the property but this year, because many older pines have died, the large red-headed birds have taken up residence feeding on insects they find in the trees.


After a while, it was time to row back home.  I knew I had lingered longer than I probably should have and would be late to my daughter's house to babysit my grandchildren.  But I also knew they'd understand.

I'd had another stressful day and my evening row and quiet pause at the north end of the lake was my way of regrouping and returning to a state of mental calm.   Seeing the birds helped turn my mood around.

Little things can mean so much...