SIMPLY LIVING
In early June, Ralph and I were thinning out the crepe myrtle trees by our house so they wouldn’t block the view to the lake.  While sawing away at one particular limb, I noticed its interesting shape. 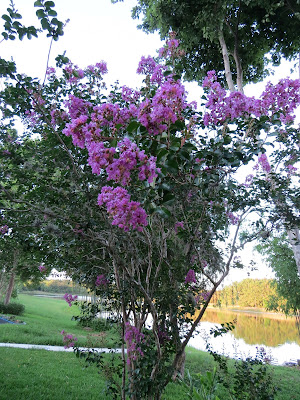 The 10-feet long, four-inch diameter main trunk branched off in three directions making it resemble a long forearm leading to a handful of splayed fingers.  After giving the trunk a good look-over, I decided to lob off each of the three branches about two feet above the forked section.  I then set the entire piece aside because it had “future project” written all over it.

“What are you doing with that branch?” Ralph asked as we were loading the pruned wood into the truck.

We filled the truck with our other trimmings but my “special” branch remained on the ground.  That’s where it stayed for several days until I had a plan.

One afternoon it came to me.

“I know what we can do with that crepe myrtle limb,” I said.  “We can make it into a perch for the birds in the middle of the lake.”

In the center of our lake is a submerged peat island out of which one perch already stands.  Anhingas, cormorants, ospreys, herons and kingfishers regularly land there on a wooden platform mounted atop a bamboo pole.  A second bamboo pole used to protrude from the peat as well but last winter, it broke off and drifted away.  I thought the crepe myrtle branch with its sturdy limbs and mottled bark would make an attractive replacement.


Since I wanted the crepe myrtle perch to include a platform instead of just having its three “fingers” pointing upward, we decided to attach a round upside-down garbage pail lid to the limbs.  The concave cover, made out of black heavy-duty plastic, fit snugly between the three “fingers” and even had a center drainage hole.


After fastening the lid to the limbs with screws, we placed the repurposed tree trunk in my boat and I rowed Ralph and my new perch out to the peat island.

Despite the precariousness of toting a 10-foot long chunk of tree in a 14-foot long aluminum rowboat that also contained two people, a six-foot-long piece of PVC pipe and various tools, the actual installation went surprisingly smoothly.  Ralph pushed the PVC pipe deep into the peat and slipped the tree trunk into the pipe.  Tada!  New bird perch in place!

We installed the perch on June 6.  While the other perch gets plenty of visitors, I haven’t seen a single bird land on the new platform yet.

I wonder if it is not being used because it’s new or because the birds don’t like the repurposed trashcan lid?

There is another possibility.  The birds might not be landing there because the tree is growing.

As it turns out, if you cut off a substantial portion of a crepe myrtle tree, stick it into a mound of submerged peat and leave it alone during the hot summer months, said tree will take root.  Leaves will sprout along its base along with a flush of new leaf-covered branches.

So now what we have sticking out of the water in the middle of our lake are one metal pole with a wooden platform on top of it and one crepe myrtle tree with an expanding cap of green leaves.  Who knows - one of these days the crepe myrtle might even flower.  A flowering tree growing out of lake water…now wouldn’t that be something.

When I first saw it, I knew that cut-off chunk of timber had the potential to become something special.  My vision might have been different from what developed but I was spot on about it being special.