I didn't plant them.  At least I don't remember planting them...

That hasn't stopped dozens of pale pink begonias from planting themselves.  They're growing underneath the raised pots of herbs and vegetables in our west garden.  They're not exactly growing in soil - at least not soil in the traditional sense.  Instead, their shallow roots have settled into the leaf litter and organic matter that accumulates on any outdoor surface. 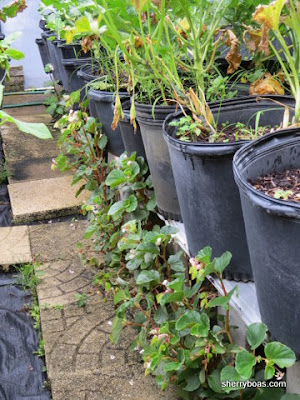 Now that I think back, there may have been one begonia in a container at some point in the past but, if there was, I paid it little attention.  I certainly don't recall ever propagating it.  However, I suppose whatever I did or didn’t do is inconsequential.  The plant obviously had intentions of its own.  It was determined to grow despite (or in spite) of my personal involvement.

The begonias in our garden are leggy plants growing up to a foot tall.  When they get that big, they tend to flop over onto the pathways between the narrow rows of raised pots.

My husband, whose passion for edibles far exceeds his concern for flowers, doesn’t like it when the begonias get in the way.  He thinks nothing about stepping on, knocking over or breaking off wayward blooms.

Even though I didn’t plant them, I’ve become protective of these volunteer blooms.  Since I don’t like to see them squashed, kicked over or broken off, I try to be proactive.  I transplant young starts to pots and break off some of leggier plants to root the cut ends in an available container.

So far, my efforts have paid off.  All of the transplants and cuttings I’ve made are thriving.  Turns out, begonias are ridiculously easy to propagate (hence the proliferation of volunteer blooms in our garden.)  I’ve done my plant-rescues without using any rooting compound or fancy tools.  I just scoop out a young start with my fingers, stick it in an available pot with soil (no special soil mixture necessary), push it firmly in place and let it alone.  It doesn’t seem to matter if the location I put it in is sunny or shady.  As long as the transplant gets regular water, the begonia does fine.

The same is true for cuttings.  I don’t bother with scissors, knives or fancy lopping tools, opting instead to break off a leggy section of an existing plant with my hand.  After poking a finger-sized hole in soil, I push the broken stem in, firmly pressing down on the dirt around it.  Other than regular water, it receives no further attention.  That doesn’t stop it from growing.  Within a couple weeks, the begonia has readjusted sufficiently to send out new growth.

Although begonias are native to India, their attractive foliage, long blooming period (they like hot weather) and invulnerability to pest problems, have made them highly desirable landscape plants.  They work equally well as bedding plants for shady areas, in hanging baskets, containers or as houseplants.

Begonia cucullata is one of four species of wax begonias used to develop the thousands of different cultivars sold today.  I believe the volunteers in our garden are a type of wax begonia that has self-propagated from seeds.  Hundreds of too-small-to-be-noticed seeds develop inside brown papery pods, which, when released, disperse in the breeze, settling and rooting like weeds with minimal needs.

A comparison to weeds is not farfetched.  The pinkish-white-flowering begonias growing on the ground beneath our raised containers of vegetables and herbs have all the characteristics one would attribute to an invasive plant.  They appear prolifically in places where they are not necessarily wanted (at least by some of us…) aren’t bothered by pests and thrive without need for human intervention.

I guess that makes them just another example of the old adage, “One person’s weeds are another’s flowers.”

For me, the begonias are an unexpected surprise, a splash of color in an otherwise utilitarian space.  Perhaps my husband would like them better if he knew begonia leaves and flowers are also edible.  They are.  Although it’s not the best tasting vegetable in the world, the plant’s blooms and greenery make a pleasant addition to salads or cooked vegetable dishes.

I don’t know if that information will stop my vegetable-gardening husband from stepping on floppy flowers that get in his way but I hope it provides reason to pause before knocking one over.  After all, the volunteer begonias have demonstrated a strong desire to thrive in our garden.  They’ve obviously found a spot that meets their needs while inadvertently meeting my needs for unanticipated beauty.  They even have the potential for meeting my husband’s needs for more easy to grow edible plants.  It seems like a win-win-win situation all around.