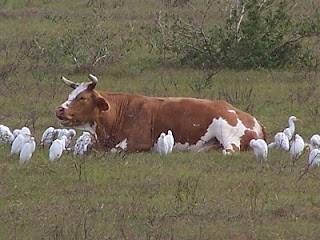 Egrets eat flies which bother cattle...and people
Simply Living
(First appeared in Orlando Sentinel June 27, 2010)
Yellow flies are nasty little buggers.
I was showing a customer around the bamboo nursery on a hot weekday morning when it became obvious that something was biting us. We politely tried to ignore the bites at first, but our sense of propriety was short-lived. With arms, legs and necks suddenly punctured by painful pecks, we stopped talking and started swatting.
The yellow fly, Diachlorus ferrugatus, belongs to the Tabanidae family of insects, which includes the equally annoying horse and deer flies. Although adult flies are present in Florida from March through November, tabanids are most active from April through June, especially in the early morning and late afternoon.
Renowned for their relentlessness, these yellow-winged fliers provide no audible warning. When they are ready to attack, they do so silently.
Females — the only ones who bite — wait for their warmblooded prey in the shade. When a mammal unwittingly ambles along, the female uses sight, smell and an awareness of carbon dioxide emissions to sense its presence. Once her target is located, she abandons her shady retreat in pursuit of her intended meal: fresh blood. Although adult flies of both sexes survive on a diet of nectar and pollen, females need blood for the development of eggs.
I have a generous nature when it comes to wildlife, but I draw the line at offering my own vital fluids for insect sustenance. Unfortunately, my preferences were not honored. By the time the yellow flies found us, it was already too late. Enough blood had been withdrawn to assure the continuation of the species.
Unlike mosquitoes, yellow flies don't inject an anesthetic when they bite. That explains why their bites are so painful. They puncture the skin by making a serrated cut before sucking blood through their tubelike mouthparts.
Until that day in the nursery, I rarely gave yellow flies a thought. That wasn't the case 30 years ago when we lived on Cape Cod. On the Cape, flies were a seasonal nuisance. Along the Massachusetts coast, we were bothered by another member of the Tabanidae family, Tabanus nigrovittatus, better known as the salt-marsh greenhead.
These equally aggressive pests appeared in late July, making it impossible to spend any time outside without suffering multiple bites. They pestered us mercilessly for two weeks until the first high tide of August, and then they disappeared. I miss many things about Cape Cod, but greenheads are not among them.
Since we've been in Florida, I can't recall a time when yellow flies were a nuisance. We have plenty of killdeer and cattle egrets on our property, and both birds consume tabanids, so perhaps the birds have helped control the fly population. At least they may have helped until now.
"Expect the unexpected" is one of my mottoes, and although most of my discoveries are joyful, every now and then I have a less-than-pleasant encounter. The yellow-fly incident was a reminder that life is not all sunshine and smiles and that some things in nature just plain hurt.
Posted by sherry boas at 5:04 AM