A stinging reminder that summer has arrived 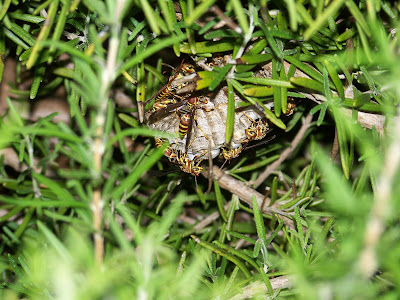 
Every summer I manage to get myself stung by a wasp.  This summer is no exception.

On a recent Sunday, I was sitting in the porch reading.  On the other side of the porch is a garden bed in which a rambling rosemary bush had sprawled over the walkway and grown about four feet tall.  For months – okay, maybe it’s been over a year - I have been meaning to trim back the fragrant herb but I kept putting it off.  I told myself I would prune it when I was ready to propagate the cuttings.  Rosemary sprigs propagate easily and the idea of wasting potential plants bothered me.  The problem was I had no idea where to put all those potential plants.  Without a plan, I opted for inaction allowing the plant to expand exponentially.

Although I was in the porch reading, I kept putting down my book to look at the lake.  However, every time my gaze swept outward the overgrown rosemary bush obstructed the view.  Impulsively, I decided to trim it back.

Impulsivity was my undoing.  Had I stopped to think, I would have at least put on some gloves and spent a few minutes scanning the shrub carefully before making any cuts.  I knew wasps nested in the dense cover provided by the untrimmed branches.  Paper wasps have lived in that rosemary bush for years.  I’ve even been stung on previous occasions when trimming it back.

People often learn from their mistakes.  Not this time.  With a burst of energy, I grabbed the hedge trimmers, opened the screen door and enthusiastically began to hack back overly tall top and side stems.

I was making impressive progress.  The wasps must have thought so too.  I snipped.  They swarmed.  I screamed and ran for cover.

One snap of the blades exposed the wasps’ previously hidden home.  Paper wasps build open-cell structures out of wood fiber mixed with saliva.  These normally non-aggressive insects often construct their honeycomb-like nests under roof eaves or in the center of protective bushes.  A queen wasp is the core of wasp community, which also includes fertile male drones that don’t have stingers and a contingency of infertile females called worker wasps.  The workers do have stingers.  It is their job to tend and defend the eggs whenever they perceive a threat.

I was that threat.

Although many wasps fly out of the nest, only one wasp managed to make contact.  It stung my left pointer finger.  A wasp’s stinger connects to a venom sac inside its body.  Chemicals in the venom cause pain and irritation.  Unlike bees that die after stinging a victim, paper wasps can sting repeatedly.  I don’t know how many times my attacker pumped chemicals into my flesh but I know its venom was effective.  Despite liberal applications of witch hazel, vinegar and Benadryl, my finger swelled up immediately.  By the next day, my left forearm resembled an overinflated balloon.

The way I see it, one sting was a small price to pay for my lapse of judgment.  Paper wasps are not evil animals out to get people.  They are actually beneficial insects that consume many of the pests – caterpillars, flies and beetle larvae – that damage garden plants.  The secret to avoiding painful interactions with paper wasps is to be aware of them and to exercise reasonable caution when working around areas where they may be living.

Impulsive behavior can be charming or, as I so recently experienced, it can also be alarming.   Next time an urge to control untidy plants strikes, I’ll try to control myself first.
Posted by sherry boas at 5:35 AM