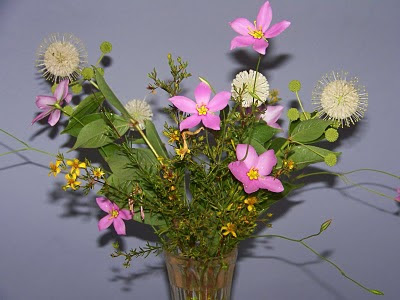 Simply Living
(First appeared in Orlando Sentinel June 20, 2010)
I came in from rowing carrying a bouquet of flowers.
"I thought you were out in the boat," Ralph said, as he watched me arrange a vase of blooms.
I admitted that I was.
"Then how'd you pick flowers?" he asked.
I told him: "From the boat."
Rowing provides many pleasures, not the least of which is the ability to see things from water that I'm unable to see from land. Certain plants — those with a tolerance for fluctuating water levels and perpetually damp soil — are often unnoticed from the house or yard.
However, as I drift along the shoreline, those same plants pop out and catch my attention. When I'm on the lake in my old aluminum rowboat, I'm looking back at land instead of seeing things the other way around. I'm on the lookout for discoveries.
Buttonbush was one such discovery.
Cephalanthus occidentalis is a woody shrub that likes having wet feet. Growing 3 to 10 feet tall, it usually roots in damp shorelines, surviving even when rising water submerges the lower limbs and leaves.
I've often thought that buttonbush was misnamed. Its white flowers aren't flat like buttons. They're round, like pingpong balls, with what looks like dozens of short, yellow-tipped needles sticking out of them. It's a most unusual and striking flower. I paddled up close to the plant and snapped off a few bloom-laden branches.
A bit farther along, I saw an expansive spread of peelbark St. John's wort. Hypericum fasciculatum is a yellow-flowered perennial herb that grows about 3 feet tall. The cheerful blossoms of this evergreen shrub are small but plentiful. Unlike other varieties of St. John's wort that prefer dry, sandy soil, peelbark does best when its rhizomes can spread through ground that's perpetually damp.
In our lake, a large stand has rooted on what used to be an exposed island of peat. With the rainy season here, the peat island is submerged, but the peelbark remains. As I rowed around through the shallows, great masses of yellow blooms grew out of the water, and I picked off a few to add to my collection.
The final flower to catch my eye was marsh-pink, also known as Sabatia stellaris pursh. As its name implies, marsh pink is a pink-flowered plant with a preference for soggy settings. The five-petal bloom grows at the end of a tall, slender stem with small leaves. At first glance, marsh-pink resembles a rose-colored coreopsis. Both flowers have similar faces — bright, open blooms a little more than an inch wide. Individual plants tend to cluster, but without the density exhibited by peelbark. Marsh pink brightens the landscape by adding a splash of color to surrounding greenery. I picked several blooms, making sure to clip them with plenty of stem intact.
When I got home, I arranged the flowers in a vase and set it on a ledge next to the kitchen window. Now, when I stand at the sink doing dishes or preparing food, not only can I see the lake, I can look at the bouquet and think of my row.
Being on the water provides a different perspective, a different way of seeing the familiar and discovering the hidden. Picking flowers is a treat for the senses as well as a way to connect with nature. Put the two together and you have ingredients for Memory Stew, a mental meal that's healthy, hearty and good for the soul.
Posted by sherry boas at 6:56 AM