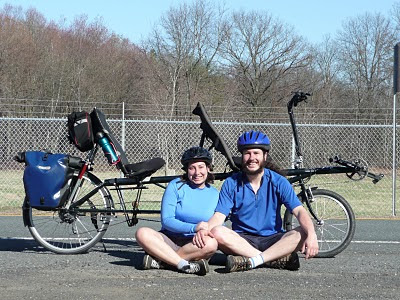 Jenny and Brett pose in front of the Rans Screamer recumbent tandem bicycle they are riding across country
Simply Living
(First appeared in Orlando Sentinel June 7, 2010)
My daughter and son-in-law left today on a three-month cross-country trip. If you're wondering why it will take Jenny and Brett so long to cover the 3,000 miles from their central Massachusetts home to the California coast, it's because they're not traveling by car, train or plane. My daring daughter and her adventurous spouse are pedaling their way across the nation on a tandem recumbent bicycle.
If you've never seen or even heard of a tandem recumbent bike, you're not alone. Jenny and Brett's preferred mode of transportation is not your ordinary two-wheeler. Their 46-pound, 27-gear riding machine is a Rans Screamer, considered by bike enthusiasts to be one of the highest-performing, best-climbing and most stable recumbent tandems.
As a parent with a propensity to dwell on potential problems (my son Toby has nicknamed me Queen Hysteria), the Screamer's stability is a comforting feature. I also find it reassuring that Jenny and Brett have anticipated many of the questions and concerns that run — or should I say cycle — through my mind.
On their blog (www.playalways.blogspot.com), a post is devoted to answering questions such as: How will you carry all your stuff? Where will you spend the nights? Can you pedal at different speeds on your tandem? What about the Rocky Mountains? What will you eat? How will you get home?
Their answers are both amusing and informative. After reading another entry about their pedaling preparations, I found myself awed and inspired by Jenny and Brett's initiative, focus, determination and ability.
Although this trip will be their first long-distance excursion on the tandem, is not their first cycling adventure. On their honeymoon in May 2009, they explored Cape Cod on two wheels, and last summer they joined another couple for a five-day pedal up and down the Maine coastline.
Brett has more long-distance cycling experience. Several years ago he bicycled alone from Massachusetts to North Carolina to join our family at a juggling convention we all attended. Even Brett's work – at one of his three jobs – involves daily cycling excursions. He's a part-time employee of Pedal People, a worker-owned, human-powered delivery and hauling service for the Northampton, Mass., area.
It's an odd feeling to see your children grow up and undertake unexpected adventures. Our son Timmy was the first of our four children to surprise us. When he was 18, he spent four months hiking the entire 2,175-mile Appalachian Trail by himself. Now it's Jenny's turn to amaze and inspire.
As I sit here in my office just a few feet away from a well-stocked refrigerator, gas stove, electric teapot and fruit-filled pantry, it's hard to believe my daughter and her husband are carrying everything they need to complete such a long journey in four blue "panniers," each about the size of a large backpack.
I was happy to see that in addition to tools, spare parts, clothing, toiletries, food and utensils, the gear list included a cell phone, solar charger and netbook computer. Thanks to technology, friends and family will be able to track the cyclists' route and stay in touch while they're traversing the nation's scenic byways.
I'm excited for Jenny and Brett as they head out on what will undoubtedly be an amazing adventure. I'm proud of them for many things, but I am especially pleased with their ability to make play a priority and turn dreams into reality.
We all have the opportunity to follow dreams, but so few of us actually do. For several years, one of Jenny and Brett's goals has been to pedal across the country. As of today — Day 1 of their 80-plus-day journey — they are on their way to making that dream come true.
Posted by sherry boas at 6:23 AM