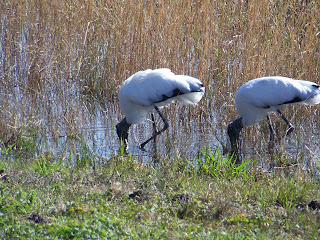 Simply Living
(First appeared in Orlando Sentinel February 21, 2010)
On a recent morning, two wood storks were trolling for food in the recently submerged shoreline. Wood storks are not among the water birds that frequent our lake, so I was especially excited to see a pair exploring our shoreline.
The presence of these large waders at our small lake was probably the result of recent rains. As rain has fallen over the last couple of weeks, water levels have significantly risen, submerging several feet of grassy shoreline. Wood storks rely on shallow water to find food — small fish, minnows, crayfish, snakes and tadpoles — so the pair on our lake may have been exploring newfound sources of delicacies.
Finding reliable, non-polluted food sources is a serious problem for these long-legged birds with dark, featherless heads, long bills and black-and-white plumage. By the early 1980s, development and pollution had taken such a toll on wetland habitats that wood stork populations declined significantly. Although there were an estimated 60,000 wood storks in the Southeast in the 1930s, by the late 1970s their numbers were down to only 5,000 pairs. Because of this, the U.S. Fish and Wildlife Service added wood storks to their list of endangered species in 1984. Since then, the population of America's only native stork has increased slightly. Today, about 8,000 nesting pairs live in Florida, Georgia and South Carolina.
The two storks I saw were busy walking through the soggy shoreline alongside a white heron and a tri-colored heron. All four birds seemed to be enjoying the recently expanded shallows and, despite the long shoreline where they could have foraged for food independently, the foursome stayed together. Perhaps the company of other birds helped the storks by causing the fish to scatter.
Herons, like most water birds, hunt for food by spotting prey with their sharp eyes before catching it with their long, sharp bills. Wood storks take a different approach. They troll through the shallow water with their stout bills ajar in the hope that their prey will inadvertently swim into the openings. When that happens, their bills reflexively snap shut. Wood storks can close their bills in as little as 25 milliseconds, a speed unmatched by most other vertebrates.
I like seeing wood storks in our lake. Not only is it satisfying to think that these giant water birds – adult birds stand over 3 feet tall and have a 5-foot wingspan – can find food here, it is also exciting to observe at close range such a weird combination of ugliness and beauty.
From a distance, wood storks are lovely creatures. With their long, dark necks and white plumage tipped by black features, they're easily identifiable. But a closer look reveals some surprisingly incongruous features. Their long necks are bald and covered with bumpy-looking dark skin. Their pink-colored feet blend into black appendages as if the birds were wearing mud-covered leggings. From the neck up, wood storks look like gawky turkey vultures, while from the neck down their shapely, white-feathered bodies have the graceful look of herons.
Although I saw only two at our lake, storks are social animals that frequently seek food in groups and spend their evening hours resting together in treetop rookeries. To find food, pairs or small flocks will travel up to 80 miles, returning home at night to perch with their companions.
It's quite possible the pair at our lake didn't have to travel that far. I believe their rookery is just a few miles away. Several times at dusk, I've driven by a small marsh on State Road 19 where I've observed about a dozen white birds roosting on the bare branches of water-encircled trees. Because it is always twilight when I pass the rookery, and because I'm traveling on a busy road, I've had only fleeting glances. Now that I've noticed wood storks on our lake, I realize that those roosting birds might be storks.
I had fun watching the wood storks feed. As much as I relish any opportunity to observe wildlife, especially animals I seldom see, observing an endangered species on the land where I live is extra special. The tadpoles, snakes and minnows might not agree, but it makes me happy knowing that the rain we've been having lately is providing new feeding grounds for some of nature's most vulnerable creatures.
Posted by sherry boas at 4:56 AM