An exotic yet healthy food: seaweed 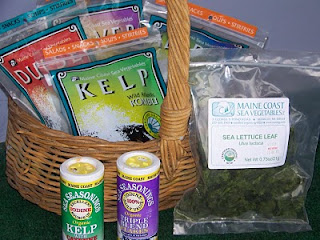 Simply Living
(First appeared in Orlando Sentinel February 7, 2010)
When I think about seaweed, I think of Cape Cod, where Ralph and I lived for so many years. During our time in New England, we regularly drove out to Nauset Beach to fill the back of our four-wheel-drive truck with eelgrass that had washed up on the shore.
We used the still-moist sea grass to mulch our gardens, and what a wonderful mulch it was! Eelgrass smelled good and felt nice underfoot. As it dried and eventually decomposed, the mineral-rich sea vegetable deposited nutrients such as iron, copper, zinc, boron and manganese into the soil. Those nutrients enriched the sandy soil, enabling us to grow large, healthy plants. Some of the tastiest raspberries, the largest heads of broccoli and the sweetest carrots I've ever eaten grew out of our seaweed-mulched gardens.
Our mulching-with-seaweed days ended when we moved to Central Florida. We lived much too far inland to drive to the beach, load up our pickup with washed-ashore sea vegetables and make the return trip home. Although no longer practical for mulch, seaweed remains a constant in our daily lives. Now, instead of using it to feed our gardens, we use it to feed our bodies.
"What's in the box?" I asked my husband a few days ago when I saw him carrying a large parcel into the house.
"It's the seaweed I ordered," he said excitedly.
The box, shipped from Maine Coast Sea Vegetables in Franklin, Maine, yielded an oceanic bounty. Ralph unpacked several packages of certified organic alaria, kelp, dulse, laver and sea lettuce leaf plus two shakers of salt-free, kelp-based seasonings. Also in his purchase were several bags of Sea Chips — unsalted corn tortilla chips, seasoned with sea vegetables, that my husband adores — and a few sesame-seed snack bars called Kelp Krunch that both of us enjoy having for treats.
"Wow," I said as I looked through the packages. "What are some of these?"
Most of the sea vegetables were familiar foods, but some, like Ulva lactuca (sea lettuce), were seaweeds we had never tried before. Dulse, alaria, kelp and laver have been part of our diet for more than 30 years. I especially like sautéing dulse in our cast-iron frying pan with a generous amount of freshly pressed garlic and a little olive oil. Within minutes, the sautéed leaves turn crisp and crunchy, making them a tasty side dish or a satisfying eat-alone snack.
I've used alaria — also known as wakame — and kelp as additions to soup, stews and stir-fries. When cut with a scissor into bite-sized pieces, the stiff, dried leaves soften quickly as they absorb liquid.
Laver, better known as nori, is probably the sea vegetable most familiar to Americans. Anyone who has enjoyed sushi has probably eaten nori, the black-colored seaweed used to wrap many sushi preparations.
In much the same way that eelgrass adds nutrients to soil, eating sea vegetables adds nutrients to our bodies. Calcium, magnesium, iron, potassium, iodine, manganese and chromium are among the 56 minerals and trace elements found in this most basic and natural of foods. Although harvested from the sea, seaweeds have surprisingly low levels of sodium.
"Dulse contains less sodium per serving than one slice of most commercial breads and one-half to one-third the sodium in one cup of cooked beet greens," according to the Maine Coast Sea Vegetables Web site (seaveg.com). Other sea vegetables have similarly low levels.
The lack of salt in seaweed is one of the main things my husband, whose blood pressure runs on the high side, likes about eating this underappreciated vegetable.
"It gives food a salty taste with hardly any sodium," he explains.
My reason for enjoying seaweed is not about its low sodium or high mineral count. I simply like the way it tastes and the different textures and colors it adds to foods. I also enjoy experimenting with and learning about underappreciated foods. Although seldom served in American cuisine, seaweed is hugely popular in Asia, where it has been a dietary staple for thousands of years. Around the world, people use more than 400 different species of seaweed for food, medicines, livestock feed and garden fertilizers.
From my own gardening experience, I learned how vital seaweeds are. Although I've graduated from mulch to munch, I continue to reap the benefits of this fundamental and multifunctional food.
Posted by sherry boas at 6:33 AM