It's natural to appreciate armadillos 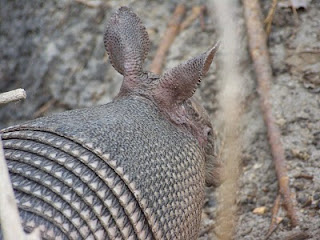 Simply Living
(First appeared in Orlando Sentinel January 31, 2010)
I live on land dotted with holes. Gopher tortoises are responsible for many of the dugouts, but armadillos have done their share of dirt moving as well. Yesterday I watched an armadillo emerge from one of the underground burrows, and I followed him as he went about his business of searching for food.
Armadillos are weird little critters. The combination of leathery skin, a pointy snout, tiny eyes, large ears, a long tail and short legs results in a creature that looks more like a walking helmet or a pint-sized armored tank than the harmless bug-eater it is. These gray-colored dirt diggers are among the most recognizable and commonly seen animals in the Sunshine State. Unfortunately, because of the way they search for food, they are also among the most disliked.
Of the 20 species of armadillos worldwide, only one species lives in North America — Dasypus novemcinctus, the nine-banded armadillo. Its name refers to the flexible midsection of the animal's carapace, or shell, which has six to 11 movable bands.
Weighing 8 to 17 pounds and measuring just over 2 feet long from the tip of its sensitive snout to the end of its ratlike tail, the nine-banded armadillo is considerably smaller than its distant relative, Dasypus bellus, which roamed South America between 2.5 million and 10,000 years ago. Dasypus bellus was a 600-pound behemoth with a 10-foot-long body that stood about 31/2 feet tall. It looked like a giant version of the present-day armadillo.
Considering how annoyed many homeowners are by today's version of Dasypus, it's probably a good thing the 600-pound hole digger no longer exists. Armadillos are nocturnal animals that find their food by smell. Their diet consists primarily of bugs, supplemented by berries and occasional bits of carrion. Like their anteater and sloth cousins, armadillos have sticky tongues and long, sensitive snouts that can detect the movement of worms, ants and other insects moving underground.
Once they've homed in on their target, these surprisingly spry mammals quickly uproot their prey with their sharp, strong claws, leaving behind a trail of wedge-shaped depressions in the process. Homeowners often get upset when they realize that an armadillo has been digging in their yard. That's too bad because for the price of a few shallow holes, homeowners have gained an invaluable service.
One armadillo can consume 40,000 ants at a time. Armadillos also keep down the termite populations, can devour entire wasp nests and delight in consuming cockroaches, grasshoppers, larvae, spiders, worms and snakes. Their annoying digging aerates lawns. The aftermath of an armadillo foraging expedition can make a mess out of a patch of St. Augustine grass, but once the holes are refilled, the grass will grow better for having been aerated.
The armadillo I observed popped out of his tree-shaded burrow and immediately began looking for food. I watched as he busily wove in and out of one brushy spot after another. Because armadillos have terrible eyesight, I was able to stand extremely close to the preoccupied poker as he chased after underground delicacies. Even though I was always within a couple of feet, I couldn't tell whether the armadillo was male or female.
Female armadillos are unusual in that they always give birth to four same-sex babies — never more and never fewer. Baby armadillos, called pups, are born with open eyes and the ability to walk within just a few hours of birth. Unlike their parents, they don't have a hard shell. Pups have a soft skin that hardens gradually as they mature. As often as I've seen adults, I've never seen armadillo offspring. Perhaps now that I've identified a burrow as an armadillo home, I'll have a chance to observe some young members of this interesting family of bug-eating mammals.
I like sharing the land I live on with a bunch of crazy-looking, hole-digging, armor-covered critters with the ability to produce identical quadruplets. With a population in the 30 million to 50 million range, Dasypus novemcinctus is living proof that you don't have to be pretty to be prolific. A good nose, strong shell, sharp claws and a proclivity for bugs are helpful traits on the evolutionary trail. Sometimes the oddest creatures are among nature's most fascinating. The armadillo is definitely an animal I dig.
Posted by sherry boas at 5:00 AM