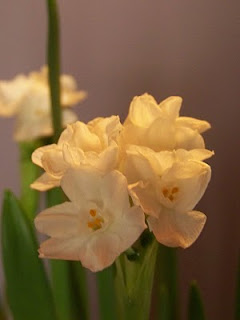 My kitchen smells like springtime. The flowery aroma isn't due to some artificial air freshener, incense or cleaning product. It's the result of three bulbs and a bowl of sand. The sweet smell of narcissus is scenting the room.

The narcissuses were a gift hand-delivered by my son from his 93-year-old grandmother in Seattle. My mother-in-law is an avid gardener. During the winter, bloom-filled containers face the picture windows overlooking Lake Washington. Mary has a green thumb, a trait inherited by our 26-year-old son, who lives with her in Seattle.

Timmy gave me the narcissus bulbs a few months ago when he was home for a visit, but for several weeks I did nothing with them. The brown papery bulbs sat on the window seat inside the paper bag they came in. Unlike my husband, who grew up in a home where forced bulbs were a seasonal norm, my childhood home was devoid of interior gardening. Perhaps that's why my confidence for growing indoor plants has always been shaky. Nonetheless, I decided to give the bulbs a go. How hard could it be to force flowers to grow?

As it turns out, it wasn't hard at all. One day, with a burst of optimism, I took down a glass bowl from the shelf, went down to the lake and filled the bowl with sandy soil. I then took the three bulbs and pushed their pear-shaped bodies into the sand until about half of their brown surface was submerged. I filled a jar with water, gave the potential blooms a generous drink and set them on a windowsill in my kitchen, where I could see them daily and add water whenever the soil became dry to the touch.

It didn't take long before green leaves began to appear. Day by day, more leaves sprouted, grew taller, fuller and more and more verdant. When the leaves stretched over a foot tall, I began to wonder if greenery was all the bulbs would ever produce. Where are the flowers? I asked myself. Did I do something wrong? Should I have used dirt instead of beach sand? Was I supposed to refrigerate the bulbs before planting them in the container? So many questions popped into my head. So many doubts crowded out my budding enthusiasm.

Then the other day, as I was washing yet another sink full of dinner dishes, an unfamiliar but pleasant fragrance drifted my way. What's that? I wondered as I looked about. It was too pleasant to be coming from the compost bucket sitting on the counter and too floral to attribute to the ripening hand of bananas hanging nearby. I wondered if it could it be the bulbs. My eyes glanced quickly toward the windowsill.

Sure enough, that's exactly what it was. At the tip of two of the three bulbs were clusters of small white flowers. Although the blooms had not yet completely opened, the dainty petals already emitted a heady essence. I buried my nose in the cup-shaped flowers and inhaled deeply.

Suddenly I was no longer in my kitchen cleaning up the remains of the evening meal. I had traveled back in time to a place where daffodils grew wild. I was on Cape Cod. I was in the yard surrounded by fields of paper whites, narcissuses and daffodils. It was springtime, and it felt wonderful to be outside at last in the warm, flower-filled, sweet-scented air.

Back in my kitchen, I opened my eyes. The view from the window in my Central Florida home looked oddly similar to the long-ago view from my Cape Cod kitchen. The recent cold snap had zapped the color from the foliage. The same sense of one season giving way to another prevailed upon the landscape.

It's amazing that something as simple as a narcissus bloom can trigger such sensual and visual memories. I'm glad I unpacked the gift my mother-in-law gave me and took the time to plant the bulbs in a bowl of sand. The effort on my part was minimal compared to the rewards I received. It was proof once again that you don't have to inherit a green thumb to reap the benefits of a floral display. Gardening is a pleasure anyone can enjoy.